2018 proves to be another record year for the MENA startup ecosystem with 366 deals, more investments than ever before in MENA-based startups, and total funding up 31% from 2017.

The 2018 MENA Venture Investment Report does a full deep dive into the MENA startup ecosystem across the region. The table of contents for the 100+ page report can be found here:

● Exits: Historical review and details on all exits in 2018

● Top Deals by Quarter: Commentary and breakdown of top deals by quarter across the MENA region

Key insights from this year's report include the following.

Executive Summary
Funding in the MENA region topped $800M: $893M was invested in 2018, an increase of 31% compared to the $679M invested in 2017. 2018 saw 366 deals take place, an increase of 3% from 2017.
UAE remained the top destination for startup investment: the country accounted for 30% of all deals and 70% of total funding amount. Egypt saw the largest increase, with a 7% increase in its share of total deals compared to 2017, accounting for 22% of all deals in 2018.
FinTech overtook E-commerce to be the number 1 industry in 2018 by number of deals: FinTech accounted for 12% of all deals that took place in 2018, E-commerce came second with 11% of all deals. Delivery & Transport was the most popular industry in terms of disclosed funding in 2018, accounting for 28%, mainly due to a $200M funding round in ride-hailing app Careem.
Late-stage saw an increase as a percentage of total deals: early stage, which includes Angel, Pre-Seed, Seed, and Pre-Series A rounds, increased by 2% as a share of total deals from 2017 to 2018. Late stage, which includes Series C and later stages, saw an increase of 1%
2018 saw 155+ entities invest in MENA-based startups: 47% of these entities had not previously invested in MENA-based startups
30% of all entities that invested in MENA-based startups are international: this is the same percentage of international investors that invested in MENA-based startups in 2017.
The top 10 deals accounted for 65% of total investment amount in 2018: this is up 3% from 2017. This is mainly attributable to the $100M< mega-rounds raised by Careem and Property Finder.

Highlights from the full 2018 MENA Venture Investment Report include:

2018 surpassed 2017 in terms of total disclosed funding in MENA 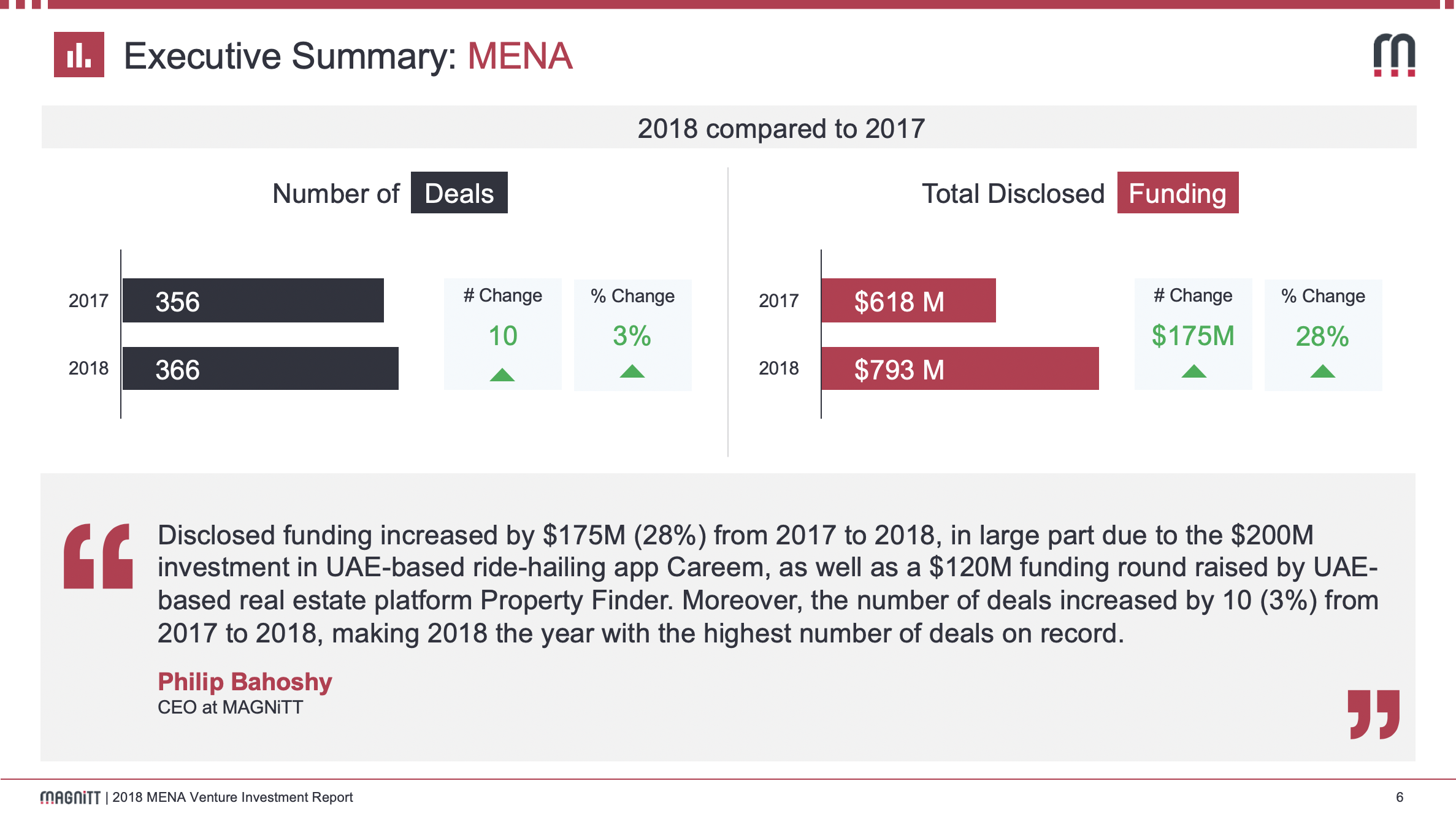 UAE remained dominant in 2018, accounting for 30% of the total number of deals in MENA. 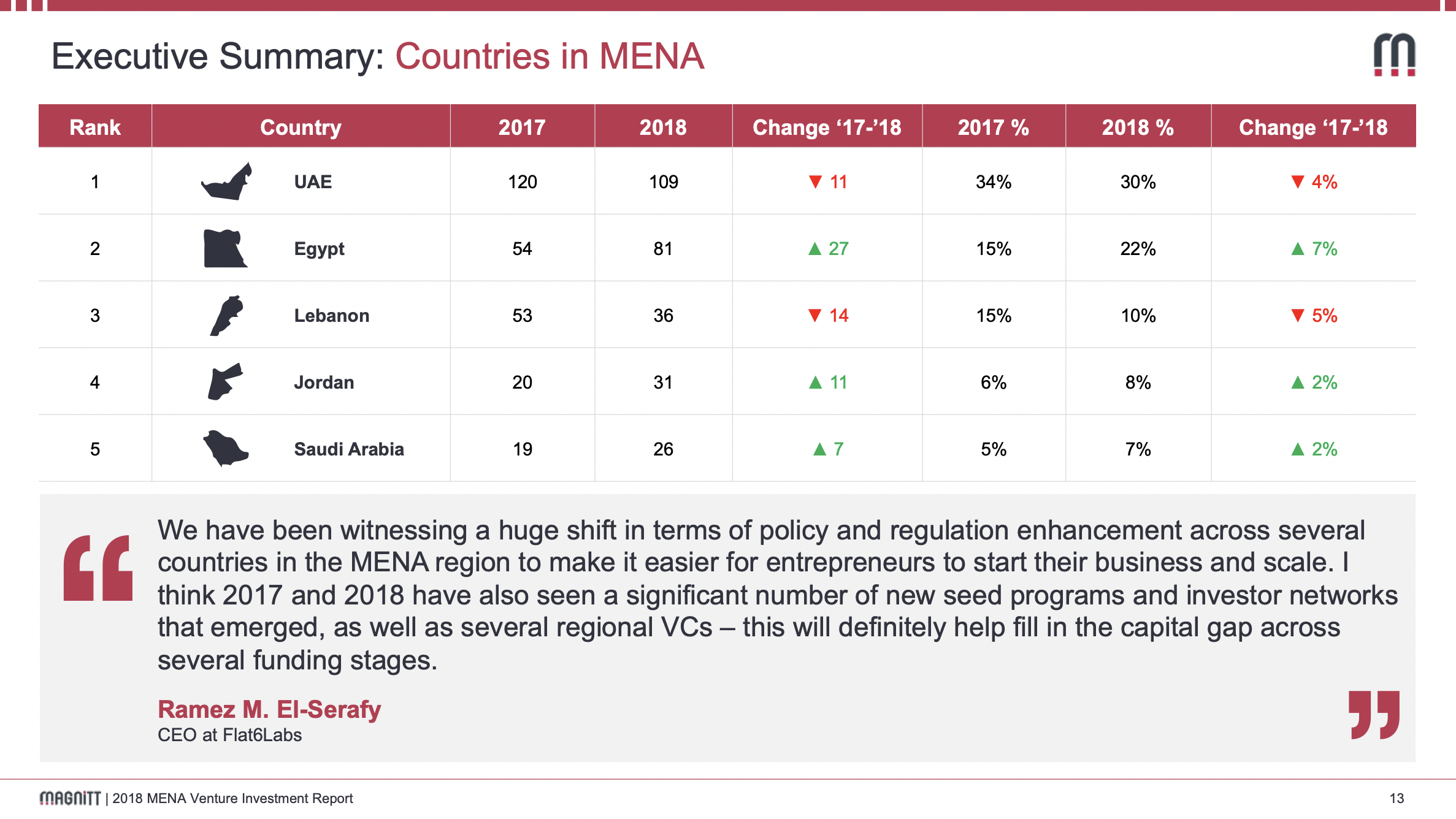 FinTech saw the highest number of deals in MENA in 2018, with a total of 43 deals 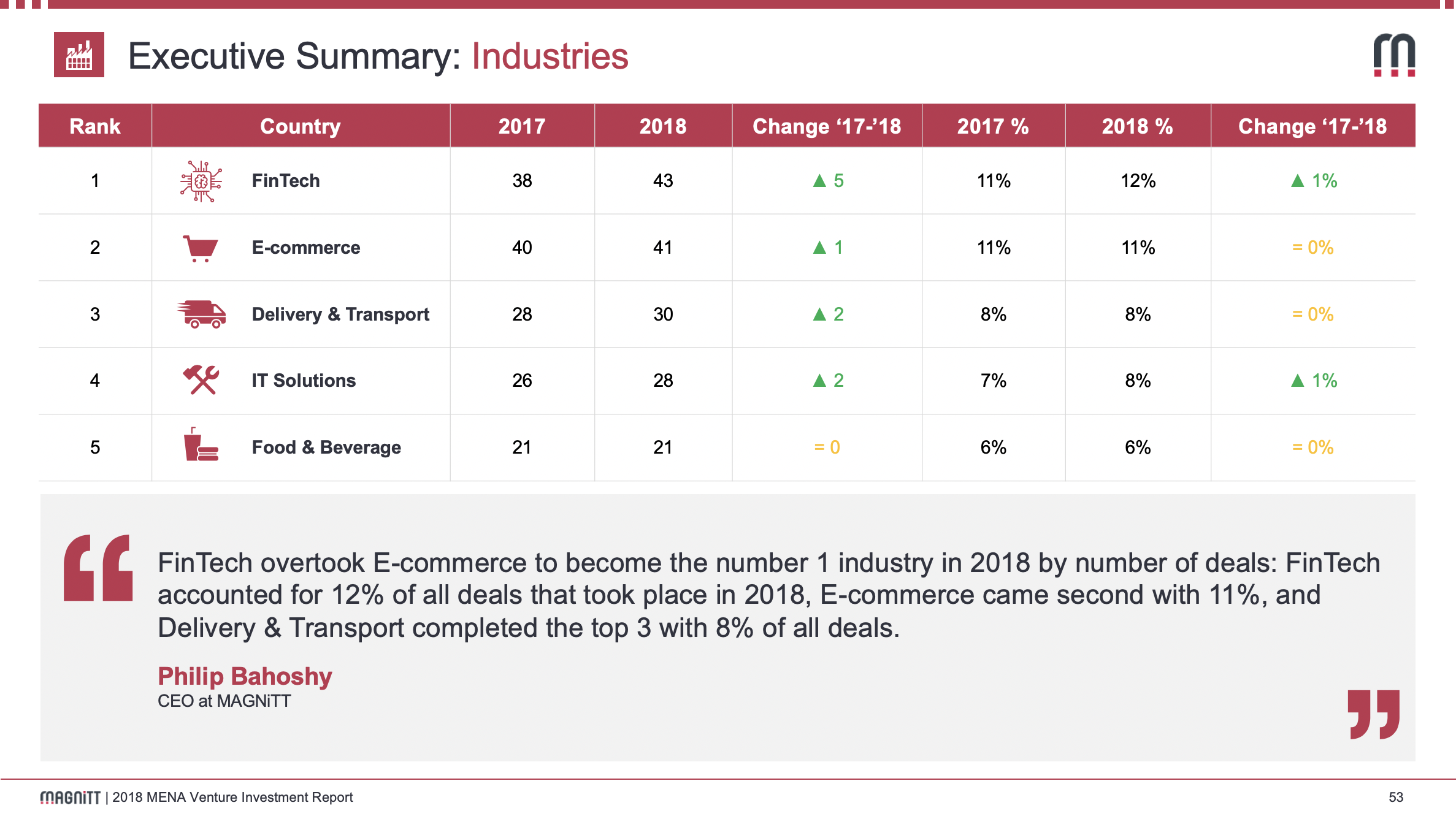 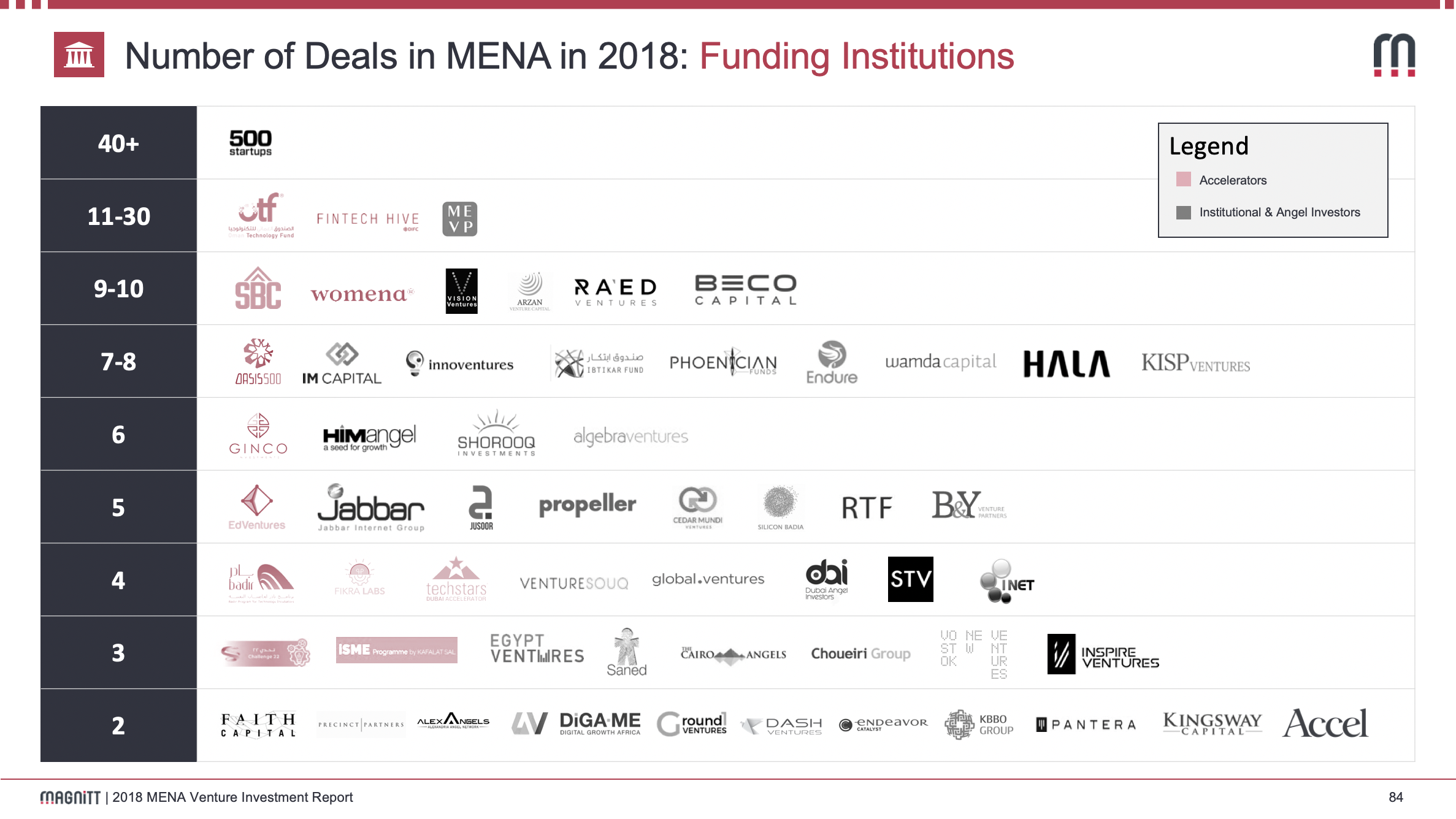 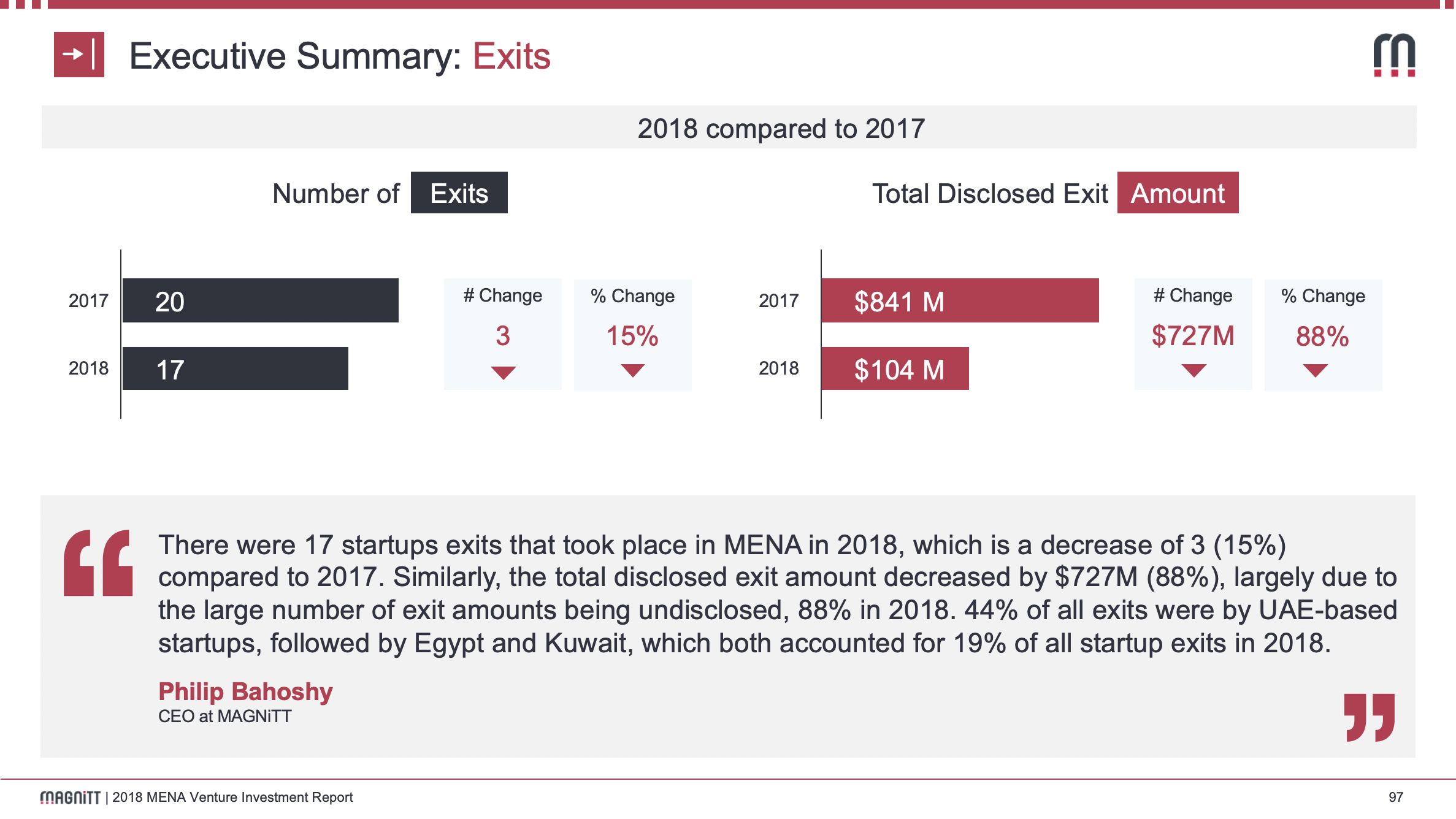 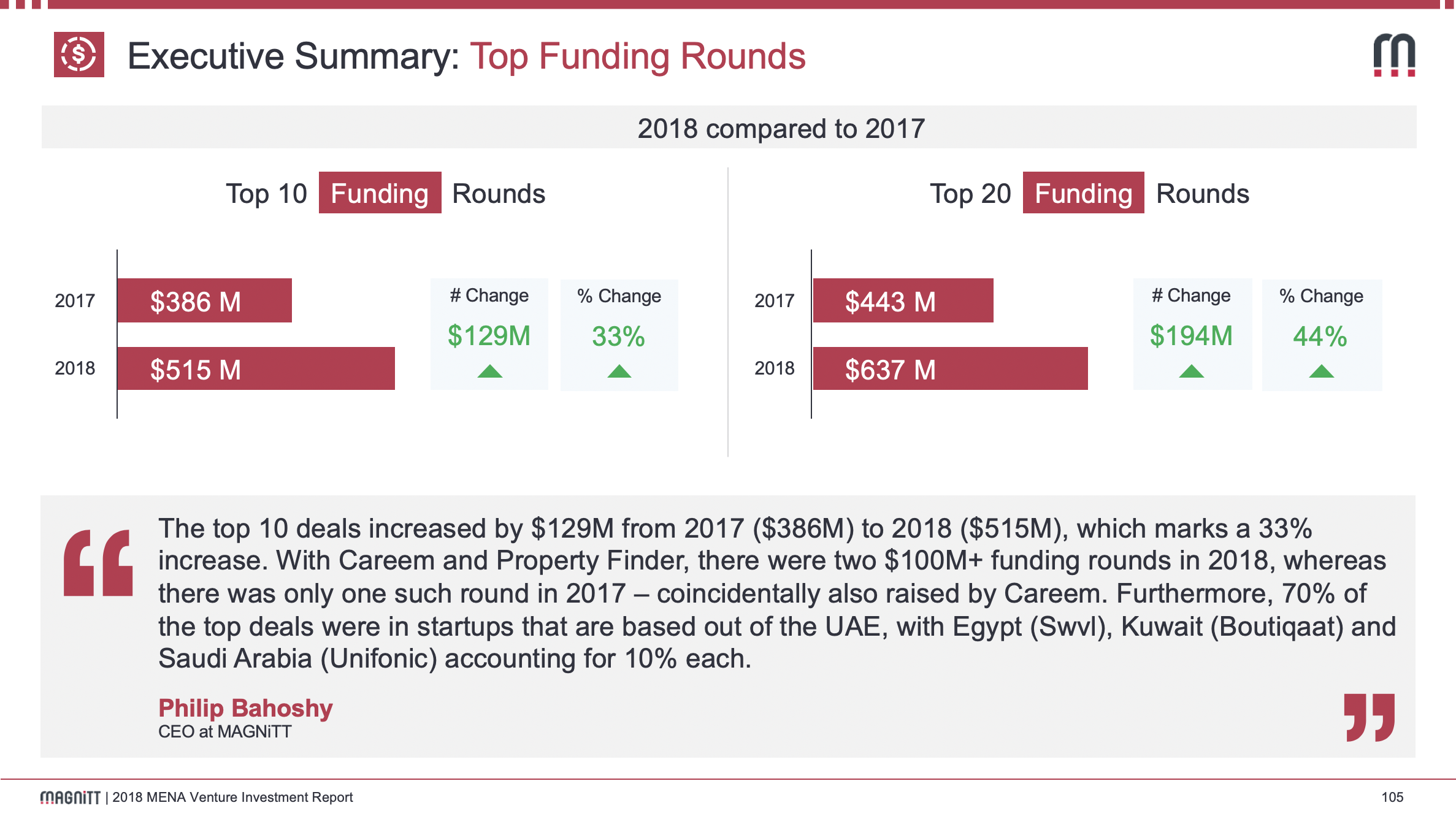