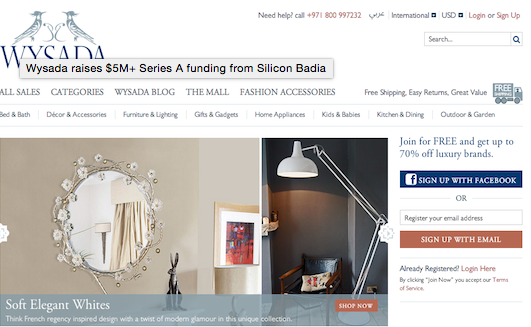 Wysada, an online luxury retailer of home goods, décor, and interior furnishings, which has been described as a One Kings Lane’s clone in the Middle East, announced this week it has raised Series A investment round of over $5 million USD.

This round, which comes almost a year after Wysada's last round from Jordan-based angel fund MENA Venture Investments (MVI), was led by Badia Impact Fund, a venture capital fund belonging to Silicon Badia, a global group of venture funds based in New York City and Jordan. New investors from Saudi Arabia and the GCC also joined the round, alongside existing investors.

“Home goods is a big market, that is mostly offline, which we estimate to be a $5 to $8 billion USD market in the GCC alone,” Namek Zu'bi, Managing Partner at Silicon Badia, told Wamda. “Where there is a lack of variety and diversity today, we have found our target demographic, mainly women 25-45 who are yearning for unique and hip items for their homes. They’re filling a trendsetter/discovery gap.”

The proceeds, which represent one of the largest Series A rounds ever raised by an early-stage ecommerce startup in the Middle East, will be used to fuel the company's rapid growth and expand current operations in Jordan, the UAE, and KSA. Key strategic priorities for the company include expanded sales and marketing efforts, hiring, procurement, and distribution, and a focus on accelerated growth in new markets across the GCC.

"Moving goods across GCC countries is not a straight forward thing, however one of the biggest advantages at Wysada that we invested in our infrastructure from day one to overcome all logistics challenges," says Mohammad Musleh, CEO of Wysada.

According to Musleh, around 70% of Wysada’s transactions are made by repeat buyers. Currently operational in the UAE, KSA, and Jordan, with plans to expand into the rest of the GCC, Wysada employs 75 people across offices in Amman, where the company is based, as well as London, Istanbul, Hong Kong, and Dubai.

As Musleh shared one lesson him and his team learned from this deal he says: "Good work eventually will pay off. Next time we will make sure to start earlier as things might take more time."
Below are the six main reasons why Silicon Badia invested in Wysada, according to Zu’bi:

Wysada provides its members with over 700 brands across varied categories that range from accessories, lighting, dining, kids and babies, to outdoors and gifts.

“What is mostly gratifying about this deal is our ability to bring a diverse group of new and capable investors into a family of already existing smart investors and strong management,” says Zu’bi. “I think we have armed the company with the structure it needs to take it to the next level. Only time will tell.”