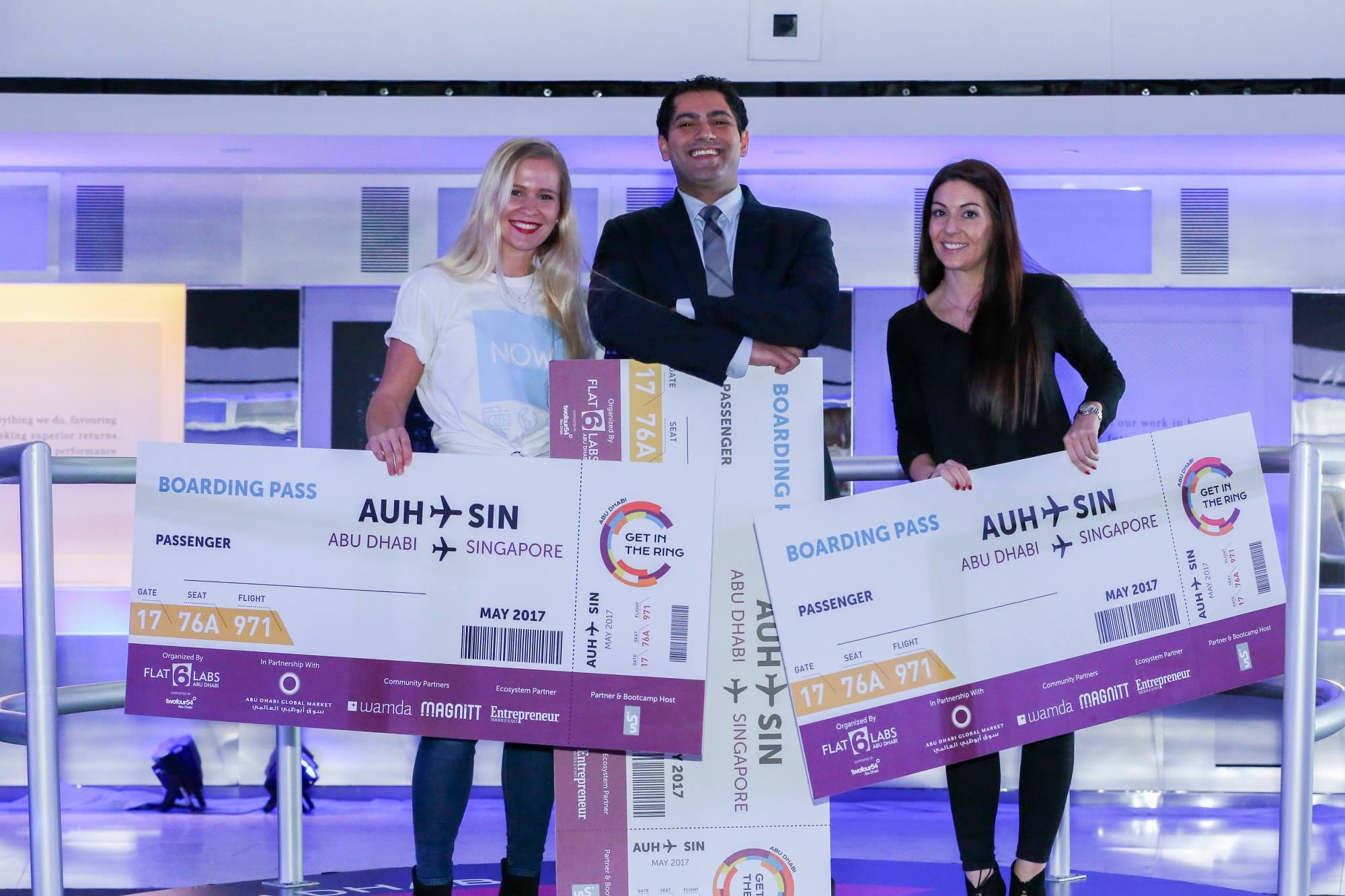 Abu Dhabi, UAE, February 28 - Flat6Labs Abu Dhabi organized the 2017 global ‘Get in The Ring’ competition in partnership with Abu Dhabi Global Market (ADGM), the international financial centre of Abu Dhabi, on 28 February in Abu Dhabi at ADGM’s premise. The competition saw a multitude of start-ups including FinTech players coming together to showcase their innovation and battle for the right to represent the UAE in the global finals to be held in Singapore in May 2017.

After an exciting evening of competition, three winning teams from different “weight” categories emerged. The winners are:

* Middleweight Championship Winner: Point Checkout, is the "Paypal for Reward Points" and allows user to combine and spend their reward points from participating reward providers online and in real-time.

* Heavyweight Championship Winner (FinTech Category) NowMoney provides a convenient, intuitive and cost effective financial management and remittance solution for people who are excluded from the benefits afforded to those with traditional bank accounts.

Victor Kiriakos, Managing Director at Flat6Labs Abu Dhabi said: “As a key player in the Abu Dhabi start-up ecosystem Flat6Labs AD is constantly inspiring and engaging the local community of entrepreneurs, investors and corporates to help grow the ecosystem and create the next generation of Abu Dhabi home grown companies.Bringing Get In The Ring for the first time in Abu Dhabi is a testimony to those efforts”.

Wai Lum Kwok. Executive Director (Capital Markets), Financial Services Regulatory Authority of ADGM, said, “ADGM congratulates the three winners and all the contestants of this very exciting and novel competition. We are inspired to see such an active and innovative startup community in Abu Dhabi and the region. As an international financial centre and financial regulator, ADGM can play an important and meaningful role in promoting innovation. We will continue to work with key partners such as Flat6Labs to nurture local entrepreneurship and to fortify the start-up ecosystem. This competition is but one of a series of events leading up to ADGM FinTech Abu Dhabi Week.”

Get in the Ring is known for its innovative format where startups face off in a boxing ring. A battle between two startups consists of five 30-second rounds about the team, achievements, and business model. The competition attracted more than 100 applications with 20 fintech and cross-industry startups that were ultimately selected to take part in the innovative competition. The competition works by bringing two startups within the same weight class based on startup valuation that battle head-to-head in the ring with their respective pitches. One battle between two teams consists of several rounds that include information about the team, the business model and its finances and more. The panel of judges that helped select the winners consisted of top business professionals from across a wide range of industries:

Aside from competing globally against winners from 100+ countries, the three winners of “Get In The Ring” Abu Dhabi will also receive the opportunity to showcase their startup at the Step Conference Startup Bootcamp and will have access to mentorship and guidance from the Flat6Labs Abu Dhabi Team. It was overall a great introduction to “Get In The Ring” Abu Dhabi, an event that showcased innovative startups that have what it takes to compete locally and globally!