Which Industries Are Hot Across The MENA Startup Ecosystem? 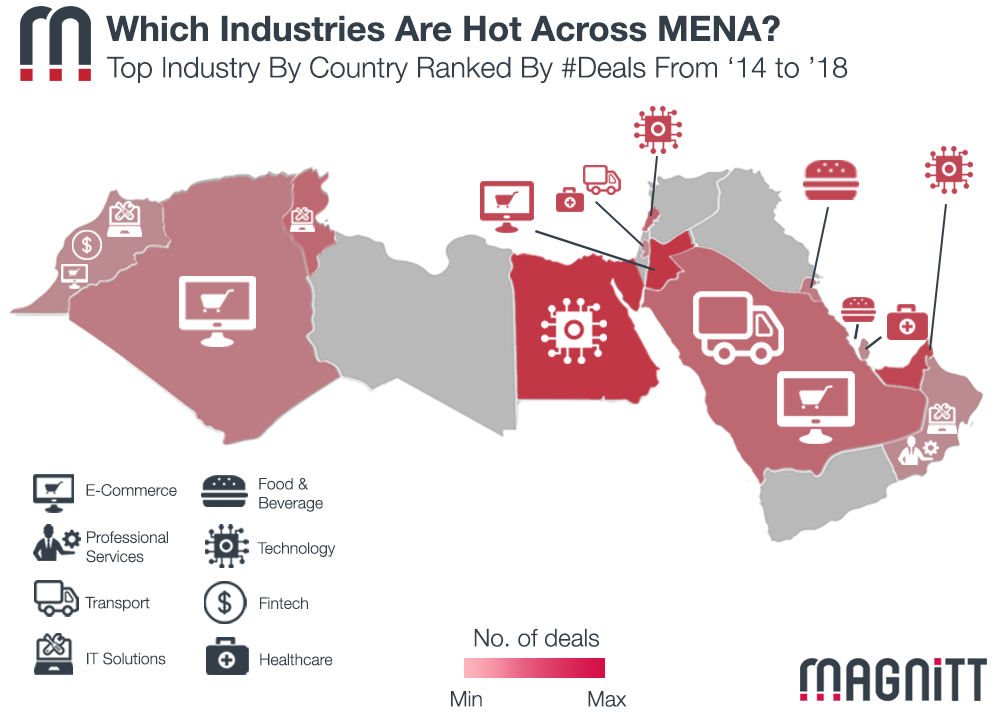 In MAGNiTT’s 2017 State of MENA Funding Report, we analyzed startup funding across the Middle East and looked at trends across industries based on number of investments as well as amount invested. 2017 saw investment in E-Commerce and FinTech startups maintain their position as the industry with most investment deal flow, both accounting for 11.9% of all deals.

When analyzing year on year trends, Kuwait’s Savour Ventures’ Accelerator program, specializing in FoodTech saw the largest increase of 3% in deal flow across 2017.

We wanted to see how geographies differ across the MENA region. In our latest infographic we compare what was the most popular industry by total number of investments made in the country between 2014 and 2018.

Technology focused startups has proven to be the most popular industry across 3 countries, including Egypt, Lebanon and the UAE. In Egypt and Lebanon, the industry currently makes up 17% of all deals, while it accounts for 14% of all Emirati startups deals.

In Saudi Arabia, E-Commerce and Transportation startups each accounted for 11% of all the deals. According to Forbes, “shoppers in Saudi Arabia have showcased a rising tendency of purchase of fashion products through online portals led by the availability of price discounts, offerings of wide varieties of products and ease of shopping which has driven the consumers to make online purchases”. We notice that Saudi Arabia’s growing E-Commerce market is being reflected in their startup ecosystem.

Food & Beverage saw the largest increase in activity of investments last year, and has been the most prevalent industry in Bahrain and Kuwait while being the 2nd most popular in Egypt. Some well-known F&B startups include ReserveOut, Knockmart.com, and Eat App. These have been the flag bearers for the industry whose startups have received increased funding and popularity in recent years.

In Tunisia, IT Solutions has been the industry with the most number of deals (21% of the total), Echo and Naviacom were the last startups in the industry to receive funding, both being Flat6Labs Tunis graduates.