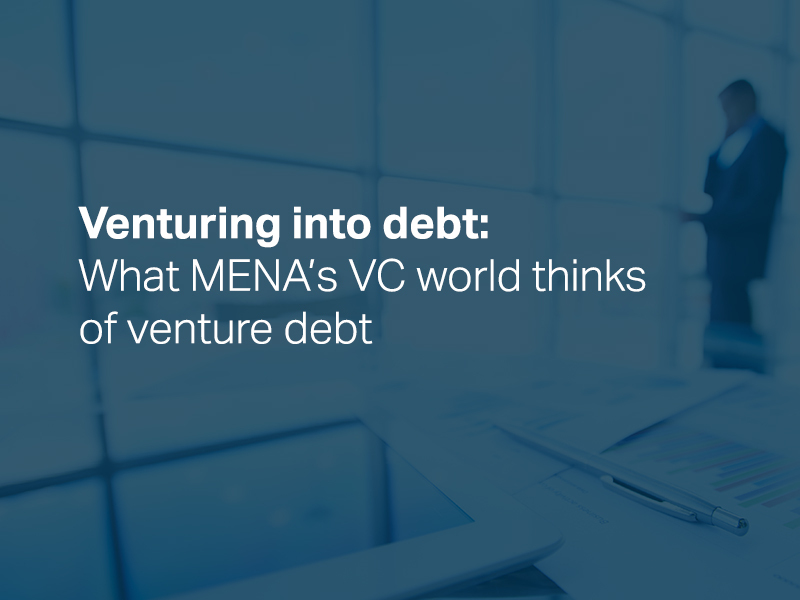 In June 2021, fintech startup Tabby raised a $50M in debt financing, its second such round and the largest in the MENA region. Prior to this, Saudi-based buy-now, pay-later platform Tamara raised a $110M mixed round of debt and equity. With this, the two startups shed light on the global rise of venture debt and its inevitable emergence in MENA’s VC ecosystem.

As per a recent pitchbook report, the growth of venture debt is outpacing that of the wider VC ecosystem in the US. Since 2019, more than $80 billion in loans and other debt products have been originated for VC-backed companies in the United States. In the Indian market, 8% of all VC funding was constituted of debt in 2020.

That said, venture debt is better suited for some startups than others. It is often entrusted to startups with a proven business model, well past the initial stages of equity fundraising. Our latest survey-based study, compiled in the 2021 MENA Venture Debt Sentiment Report, aimed to gauge the existing knowledge and attitudes around venture debt in the region.

Interestingly, the majority of respondents saw most value in using venture debt in unison with equity. This was evident when Tamara raised a split round earlier this year, or when Opontia raised a $42M split round just this month. Even Tabby went the equity route soon after successfully closing its venture debt deal for the same amount. The responses to the following survey question mirrored global attitudes as most of the 3000 times US-based companies used debt products in 2020 was also in tandem with equity (Pitchbook, 2021).

Another defining attribute about venture debt is the control it allows founders to retain while raising capital. This non-diluted incremental capital after a debt round even assists the valuation of startups over time, as indicated in the chart below (source: Kauffman Fellows). Adding leverage through venture debt could in the long run increase returns to equity investors.

The survey underscored this as it revealed that investors ranked the attribute as the second-most important when advising portfolio companies on venture debt. Startups, on the other hand, ranked ‘Non-dilutive Capital’ as the fourth most important factor.

MAGNiTT CEO Philip Bahoshy will engage the Head of Debt at SHUAA Capital, Natasha Hannoun, in an in-depth conversation around the findings of the report. Join the conversation.

Both investors and startups agreed that ‘Cost of debt’ was the most influential factor when it came to considering debt. The figure below, as illustrated by Deloitte, contextualizes the expense associated with venture debt when compared to other sources of borrowing. Venture debt is usually priced higher as the lender bears greater risk in supporting emerging companies. That said, the interest payable on venture debt is often tax deductible.

Venture debt is an exciting new prospect for fundraising as startups express the need for more avenues to scale their businesses. Our survey-based assessment revealed a positive outlook for the instrument’s future in MENA. 80% of those who took the survey said they were considering venture debt for their next fundraising round in the near future. 24% of investors expected three or more portfolio companies to go the debt way over the next two years.

The research we conducted with SHUAA Capital was aimed at staying ahead of the shifts in trends and preferences in MENA’s VC ecosystem. To access all the insights we uncovered, download the FREE report here.