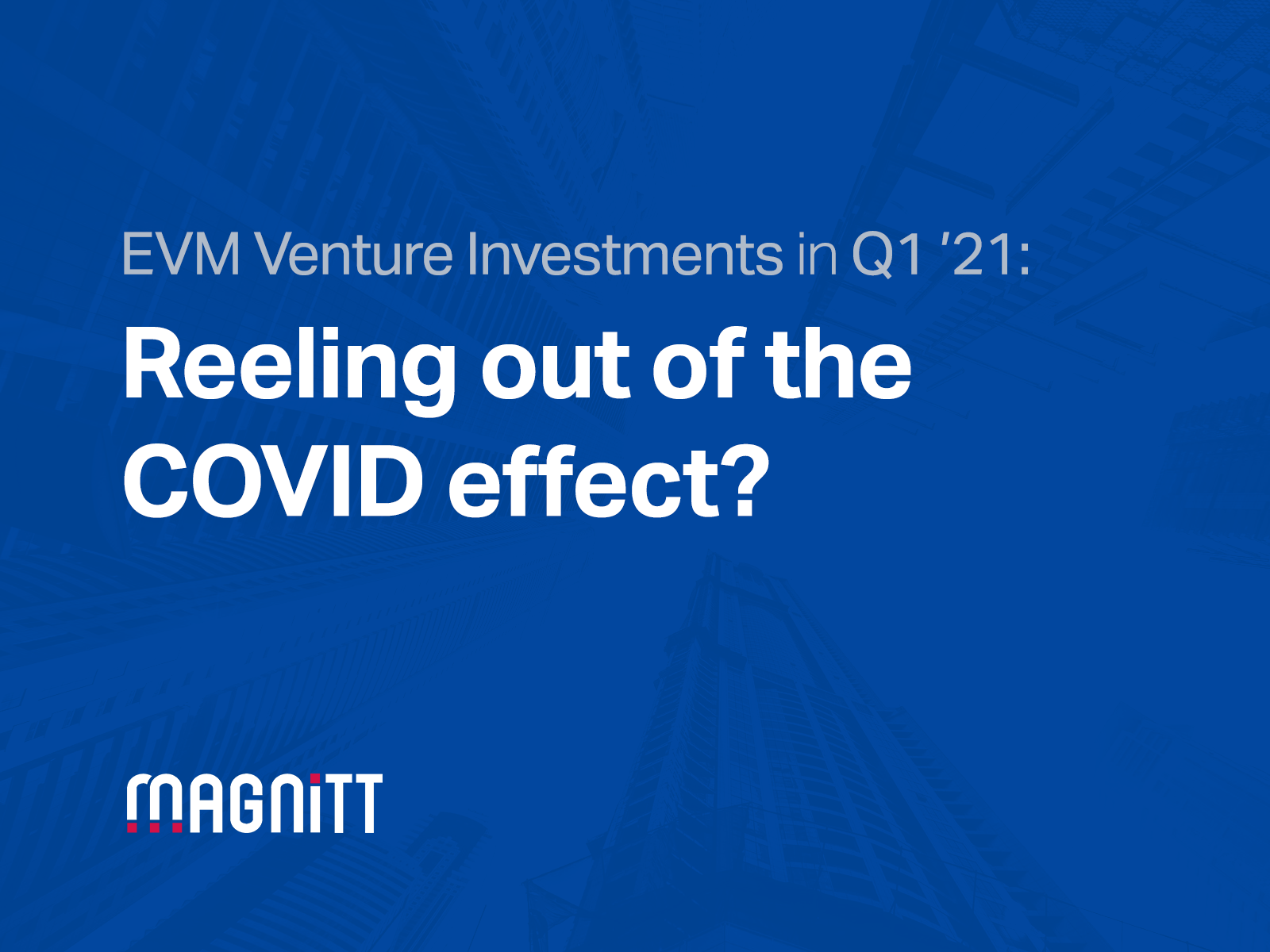 EVM Venture Investments in Q1 ’21: Reeling out of the COVID effect?

Despite the economic slowdown caused by the pandemic, the venture capital ecosystem across Emerging Venture Markets remained fairly resilient in 2020: MENA investments crossed a $1BN threshold, while funding in Turkey and Pakistan grew in 2020 at 182% and 97% to represent $383M and $77M, respectively.

Given the rapid pace of change as well as high levels of uncertainty in emerging markets, we at MAGNiTT recognize the importance of credible data-backed coverage of technology innovation sectors. With this in mind, the MAGNiTT team decided to launch recurring quarterly updates that will enable our community to stay in constant touch with the latest venture capital activity across Emerging Venture Markets.

In April, we released six country-specific reports that uncover crucial insights and trends that have shaped relevant startup ecosystems in the first Quarter of 2021. They cover the MENA region, its top performing markets namely UAE, KSA, and Egypt, as well as Turkey and Pakistan.

Three trends stood out across these quarterly reports pertaining to Q1 ‘21:

After finishing 2020 with a relatively quiet Q4, venture capital deployed in MENA saw a 60% uptick in the first quarter of 2021. The funding deployed totaled to a sound $288M, which represented more than 27% of the capital raised in 2020, as revealed in the MENA Q1 2021 Venture Investments Report.

The UAE topped the MENA rankings yet again, both in terms of deal count and capital deployed. UAE-based startups gained every fourth dollar invested across the region. Yet, the cumulative increase in MENA’s total funding could be largely attributed to Saudi-based startups that doubled their capital received this quarter. KSA thus took over Egypt in terms of funding to stand second. Provided Saudi startups can maintain this pace of growth, KSA could even surpass the UAE by share of total funding in two quarters’ time.

Pakistani startups, too, saw their total funding increase YoY, even surpassing Egypt by $2M. In addition, when compared to other MENA innovation hubs, it was one of the only markets to see a strong performance in E-commerce. This indicated that the Pakistani venture capital ecosystem was still progressing through its early stages, as the more developed MENA startup hubs saw E-commerce drop out of the top 5 industries in Q1’ 21.

2. Turkey made its presence felt in the first quarter of 2021

Q1 ‘21 was a record-breaking period for Turkey as total VC funding in this quarter alone surpassed capital raised in 2020 by 68%. Turkish startups amassed the largest VC funding by far across all EVM countries. The total funds raised by UAE-based startups, for instance, were 79% less than those raised in Turkey.

In terms of capital allocation, the top 5 Turkish deals represented 84% of all funding deployed in Q1 ‘21. Furthermore, two-third of all funding raised in Turkey went into deals sized $100M and above. The Delivery & Logistics startup Getir alone raised 65% of the total capital poured into Turkish startups during the analyzed period. The concentration of funds into a handful of large deals indicated the presence of rapidly scaling startups in the Turkish ecosystem that could potentially establish themselves as the next unicorns in the Emerging Venture Markets.

3. A particularly positive quarter for the Fintech & Gaming industries

Startups from the Fintech industry had plenty to gain in Q1 ’21 as both their deal count (+77%) and total funding (+163%) saw a healthy rise across MENA. Every fifth transaction in the region involved a Fintech startup. The industry ranked first by number of deals and second by funding share in Saudi Arabia, while it ranked second on both fronts in Egypt. Bahraini fintech startup Tarabut Gateway recorded the largest deal within the sector in Q1 ’21, worth $13M.

Gaming startups, on the other hand, witnessed a massive boom in Turkey. Their popularity as an investment target was evident, given the 1,600% increase in deal count and over 4,700% rise in funding when compared to Q1 ‘20. This was likely propagated by the rising consumer inclination to indulge in gaming as a hobby during COVID-imposed lockdowns. Some of the top Gaming startups in Turkey included Loop Games, Dream Games, Fomo Games and Brew Games.

To learn more about the most important trends in the venture capital ecosystem across MENA, Pakistan and Turkey, download MAGNiTT’s Q1 ’21 Venture Investment reports.

EVM Venture Investments in Q1 ’21: Reeling out of the COVID effect?