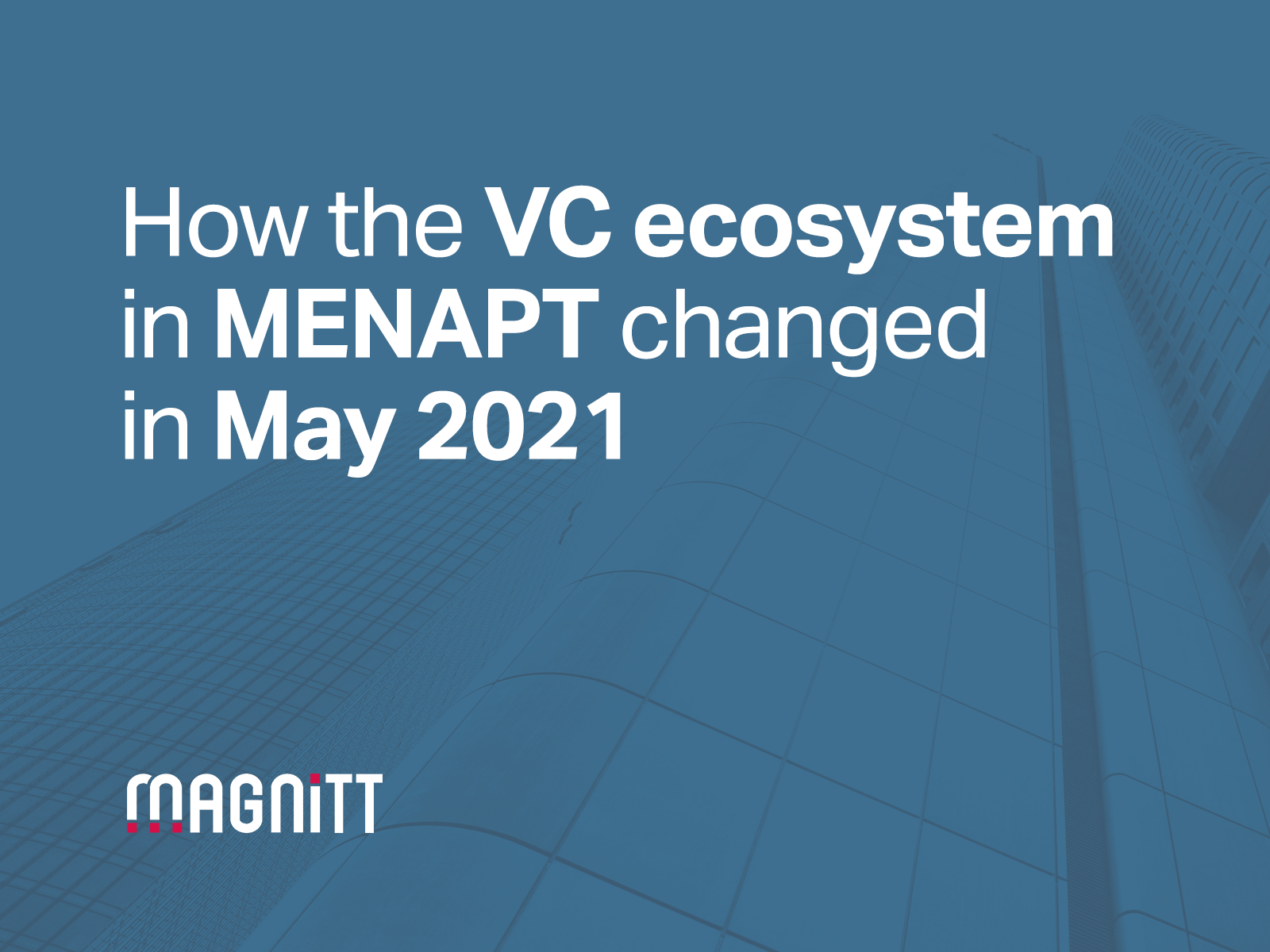 A prelude to H2?: How the VC ecosystem in MENAPT changed in May 2021

May 2021 proved to be an eventful month, unleashing new trends and further pushing forth VC ecosystems in MENA, Turkey and Pakistan. In MENA, for instance, capital deployed doubled year-over-year in May, while Turkish startups raised over 500% more capital YTD than they did in full-year 2020.

May 2021 belonged to Saudi startups who raised 40% of the month’s capital through five deals. Compared to May 2020, the country’s VC investments were 761% higher in May 2021. In Turkey, the Gaming industry continued its dominance, contributing over half of the capital deployed in the month.

Interestingly, MAGNiTT’s May 2021 Venture Investment Dashboard helped identify unprecedented trends that could change the course of the year as we enter H2.

1. Number of deals evened out across MENA’s top 3 markets

Looking back at 2019, UAE and Egypt accounted for almost one-fourth of all VC transactions each, way ahead of KSA’s 12% share in total deals. Fast forward to 2021 and the three big players in MENA’s VC ecosystem have come to share a level playing field. In 2021 YTD, UAE startups closed 44 deals, only two more than startups based in Egypt and KSA.

Furthermore, Tunisia broke into MENA’s top 5 markets by deal count, having closed 11 deals in the year so far. Lebanon, on the other hand, no longer features in this list as it did two years ago.

These developments point to a rapidly changing venture investment landscape in MENA, with markets paying greater emphasis on progressing digital innovation and entrepreneurship.

2. E-commerce re-emerged in MENA while Fintech made its strongest mark yet in Pakistan

After a relatively silent first quarter, E-commerce made a comeback in MENA’s venture investment space in May. Five startups operating within the industry raised funding rounds that contributed to 40% of the capital deployed in the month. This also marked a 1000% YoY increase in funds allocated to the industry in the region. Two of May's largest deals, closed by KSA startup Sary and Egyptian venture Homzmart, also operated within E-commerce.

In May, Pakistan saw its largest Fintech deal ever. In its Series A round, Finja raised $10M, backed by four major foreign VC firms. This year also witnessed startup Sada Pay raise a $7M seed round, indicating capital allocation to both early and later stage transactions.

3. May 2021 marked a spike in number of startups recording exits

Following three recorded exits in March and none in April, exits by MENA startups trended upwards again in May 2021. Three startups, Spotii, Faslah and Boonus, reported acquisitions only a year after being founded. Turkish Fintech startup PayCore also announced its acquisition by Mediterra Capital. So far, seven exits have been registered in the year in MENA, and three in Turkey. Across Emerging Venture Markets, the record number of exits stands at 35, achieved last year.

A prelude to H2?: How the VC ecosystem in MENAPT changed in May 2021