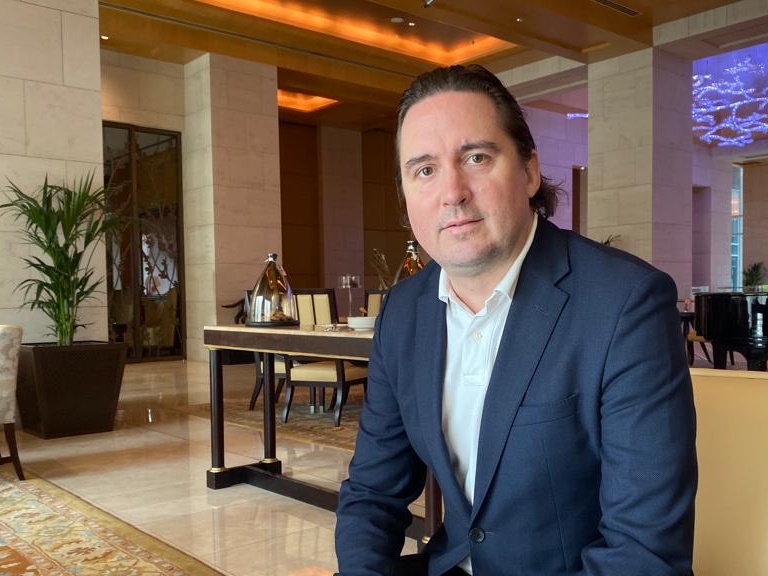 The company, which has a network of more than 170,000 investors, opened its Dubai office at DIFC in August

Global investment platform TokenMarket aims to raise $350 million (Dh1.2 billion) in funding for regional tech start-ups and small to medium enterprises out of its Dubai office by 2021, according to the company's chief executive.

The UK-headquartered entity, a token sale and blockchain crowdfunding platform, opened its local office at Dubai International Financial Centre in August, after securing an innovation testing licence from the Dubai Financial Services Authority.

“The Mena [Middle East and North Africa] region has huge untapped potential when it comes to non-traditional ways of raising capital," Ransu Salovaara, chief executive and founder of TokenMarket, told The National. "We will help local start-ups and growth-stage companies to raise money by issuing security tokens.”

Spending on blockchain in the Mena region has been growing at a compound rate of more than 70 per cent since 2016, and is set to reach $307 million by 2021, according to the US-based International Data Corporation.

TokenMarket has a network of more than 170,000 investors in over 150 countries, said Mr Salovaara, adding, “We have raised close to $350m for over 30 companies since last year and our aim is to raise the same amount in the Mena [region] in the next couple of years.”

Security tokens are issued to investors as a form of digital bond using blockchain technology that reduces administrative costs and time. Blockchain, the technology used for verifying and recording transactions, is a digital chain of transactions linked using cryptography, a mechanism for secure communications, on an open ledger. The database is a real-time library of records that are difficult to tamper with as each change creates a record.

“There are clear benefits to tokenising bonds," said Mr Salovaara. "We can register lots of data on the blockchain and borrowers can demonstrate a transparent history making future debt raising easier and cheaper."

The company has helped some of the “most notable blockchain-oriented companies evolve from single employee start-ups to hundred million dollar enterprises … we aim to replicate same in the region,” he added.

Founded in Gibraltar in 2017, TokenMarket was created to provide fund-raising tools to blockchain-orientated businesses. It later moved its headquarters to the UK, where it is regulated by the country’s Financial Conduct Authority.

“We chose Gibraltar because at that time no other European country had regulations to govern blockchain. But it suffered due to Brexit and we decided to move to London,” said Mr Salovaara.

To set up in the UAE, the company spent 18 months securing an innovation testing licence – a temporary licence issued to FinTechs allowing them to operate in DIFC under regulatory supervision - from the DFSA.

“The DFSA’s licensing will automatically convince many global investors to join us in Dubai. After some successful issuances, we will be issued a licence of a full-fledged financial company … [I am] expecting that within few months,” said Mr Salovaara.

Earlier this month the UAE's Securities and Commodities Authority sought industry and stakeholder feedback on the regulation of cryptocurrencies in the country.

The regulations will encompass all aspects of the crypto asset industry in the Emirates, from token issuance requirements to trading and safekeeping practices with an emphasis on protecting investor interests.

As well as the UAE, TokenMarket plans to open offices in Saudi Arabia, Bahrain, Egypt and Morocco in the coming months, where it sees a huge capital gap in the region.

“SME [small- and medium-sized enterprise] lending is almost 50 per cent less in this region than in Europe. But technologies like blockchain that are crucial in our industry are at [a] very advanced stage,” said Mr Salovaara.

The company recently ditched a plan to establish its Asia hub in Hong Kong.

“After the recent turmoil in Hong Kong, we abandoned our plans and decided to focus all our energy on Dubai … [that] will act as a link between Europe and South East Asia and also Australia,” said Mr Salovaara.

“Even Chinese investors and companies are preferring Dubai over Hong Kong at this point of time. Currently, all dynamics are favouring Dubai — [because of the] presence of native investors, global banks, world-class infrastructure and strong regulations.”