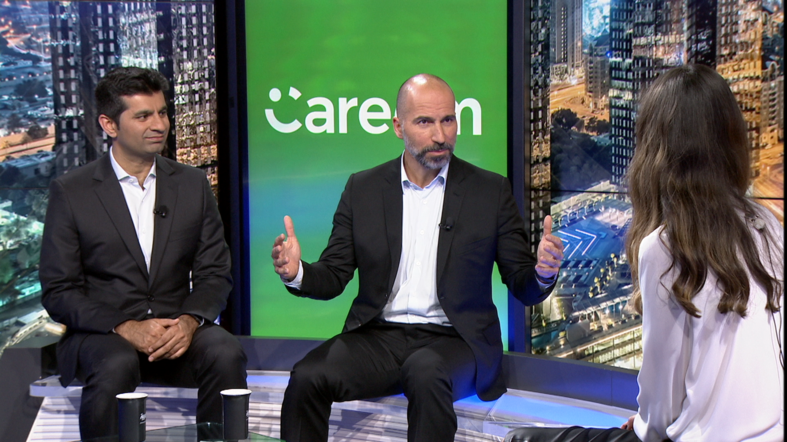 Uber CEO: We invest aggressively as transportation is a $3 trillion market

On a global level, transportation is a $3 trillion marketplace, and food delivery is another potential $1 trillion business, which is why Uber is investing aggressively, the company’s CEO Dara Khosrowshahi said in an exclusive interview with Al Arabiya.

“When you have marketplaces that are as large as ours, it makes sense in the early days to invest, and to invest aggressively. Now over a period of time, do we expect Uber to be profitable? Absolutely. But today, the more important thing is for us to lean forward, to invest aggressively because we have so much innovation ahead of us,” Khosrowshahi said.

He added that Uber’s $3.1 billion acquisition of ride-hailing app Careem is a “bet on the Middle East,” which is a region with incredible growth ahead of it.

“What’s different about this transaction is that it represents a very significant increase of investment. This is a $3 billion bet that Uber is making in the Middle East,” Khosrowshahi said.

“When we saw the opportunity of working with a competitor more closely but also increasing our investments in a region as exciting as the Middle East… We said, ‘You know what? This is a great opportunity for Uber.’ And when you see an opportunity you have to take it,” he added.

Last week, Uber said it would pay $1.4 billion in cash and $1.7 billion in convertible notes in a deal that gives it full ownership of Careem. The long-expected agreement ends more than nine months of start-and-stop negotiations between the two companies and hands Uber a much-needed victory after a series of overseas divestments.

“We are a tiny competitor versus car ownership, and I think both our companies are going to work to take down that competitor,” Khosrowshahi said.

‘Leapfrogging into the digital future’

During the interview, Careem’s CEO Mudassir Sheikha said that not enough has been invested in transportation infrastructure over the past 50 to 100 years. He said that the way forward is by “leapfrogging this region into the digital future.”

“So what if we did not build the metro system that London or Paris built? Now we’ll take advantage of all the technology that’s available to us, whether it’s mapping, dispatching, or smartphones, and build transportation infrastructure in the new way – the technology-friendly way, the future-proof way,” Sheikha said.

Sheikha added that the opportunities are endless following the integration. He said that the two apps’ current offerings in the market constitute less than two percent, and that they are going after the 98 percent.

“We realized that we are just getting started, there is so much opportunity… To deliver on this vast vision, you need a strategic partner that is aligned with you and that has the resources to pull this off. And in Uber we found an incredible partner that sees the same opportunity that we do,” Sheikha said.

When asked about a possible rise in prices after the acquisition, Khosrowshahi said that the companies always aim to devise new and innovative ways to lower prices for passengers.

“Both companies continue to invest in technologies. One technology that Uber is working on is pool technology, to get more than two passengers in a car to reduce the price that the passenger pays, while the captain or driver makes just as much money,” he said.

Uber CEO: We invest aggressively as transportation is a $3 trillion market