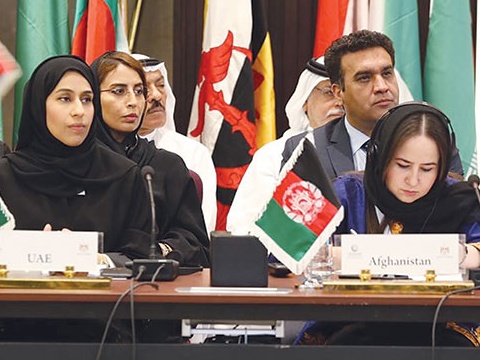 A meeting on Women Empowerment took place at the Organization of Islamic Cooperation (OIC) in Egypt. The UAE delegation was headed by Hessa Bint Essa Buhumaid, the Minister of Community Development.

She shared some very insightful thoughts on the meeting, emphasizing on women empowerment in the community. UAE in particular, is experiencing massive development in almost all the economic sectors due to more female engagement and empowerment over the last few years, which aligns with the sustainable development goals of 2030 plan.

In her speech, Hessa Bint Essa Buhumaid talked about the initiatives taken by the UAE government to empower the country’s women, across various business industries. UAE is more than happy to see the rise of women leadership in all sectors. UAE President, His Highness Sheikh Khalifa Bin Zayed Al Nahyan, has taken key initiatives to strengthen women’s position in the UAE business scene, following the footsteps of late Sheikh Zayed Bin Sultan Al Nahyan. The minister also addressed Her Highness Sheikha Fatima Bint Mubarak, “Mother of the Nation”, President of the General Women’s Union, Supreme Chairperson of the Family Development Foundation and President of Supreme Council for Motherhood and Childhood, who is also leading the women empowerment initiatives in the UAE. She established the National Strategy for the Empowerment and Leadership of Women in the 2015-2021, and the strategy has produced positive outcomes thus far.

The Minister also mentioned women participation in the UAE Federal national Council. With a female participation rate of 22.5%, this is in fact one of the most equitable legislative authorities of the world. His Highness the UAE President has issued a decree to raise this percentage to 50%. In addition, women participation in the UAE Cabinet is at 29% currently, along with decision making leadership positions up to 33%; government authorities management up to 15% and in the diplomatic corps up to 10%.

According to Gulf Toay, Hessa Bint Essa Buhumaid has also mentioned the UAE cabinet’s approval to announce new policies, legislations and national initiatives for Emirati women. The approval came in a session held at the headquarters of the General Women’s Union and was chaired by His Highness Sheikh Mohammed Bin Rashid Al Maktoum, Vice President, UAE Prime Minister and Ruler of Dubai.