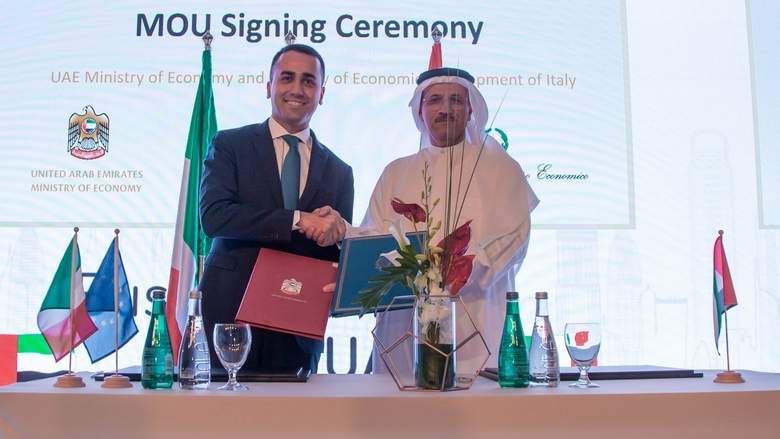 An agreement signed by the UAE and Italy on Monday for 'Startups and Innovation Cooperation' will take the two countries' strategic partnerships to a new level, Sultan bin Saeed Al Mansouri, Minister of Economy of the UAE, said.

The MoU was signed at the UAE-Italy Business Forum by Luigi Di Maio, Deputy Prime Minister, who is heading top-level delegation to the UAE.

Al Mansouri said the UAE has a unique and dynamic SME and entrepreneurship ecosystem, which is globally competitive and will continue to grow rapidly in the coming years.

"For the last 10 years, the UAE has been focusing on innovation for SMEs and startups in building and expanding its strategic partnerships with the advanced global economies. We started by signing with South Korea in 2010 and followed with leading countries including Italy in 2012, Japan, Canada, Sweden and Finland. Ever since, our partnership in innovation and SMEs continues to grow," the minister said.

The minister said the UAE and Italy have enjoyed strong trade and economic ties for many years. "I am confident that we'll be able to define more areas of mutual cooperation to achieve even greater economic and trade relations in the coming years."

He said the high-level official visit of the 200-member Italian delegation to the UAE is the outcome of the 6th Joint Economic Committee meetings that took place in Italy last year. "Despite inevitable global economic changes, the respective leadership of both countries' remain committed towards maintaining the momentum of partnership," Al Mansouri said.

Bilateral trade ties are growing strong with the total value of non-oil exchange of trade reaching $7.8 billion in 2017 and exceeded $5.7 billion in the first nine months of 2018 while showing a 7.7 per cent growth in UAE non-oil exports to Italy. The UAE is the largest Arab trading partner of Italy, which is the fourth largest European partner of the UAE and the second biggest exporter to the UAE from within the EU in 2017, Minister said.

Al Mansouri said following the signing of the MOU, the UAE wouldl take action immediately to enable and encourage inventors, startups and SMEs in both countries to engage with each other in every sector identified in the agreement. This includes key sector in the UAE national Innovation Strategy, which includes healthcare, education, technology, transportation, aerospace, water and renewable energy in addition to Italian key sectors that include mechanical engineering, financial technology, biotech and pharmaceutical. "For the past six consecutive years, the UAE has been leading the Arab countries in the 'Ease of Doing Business Index.' IMF maintains positive economic forecasts in this regard, as the country's GDP growth is estimated at 3.7 per cent this year. The UAE continues to rank first in the region in terms of FDI inflows, which in 2018 amounted to $10.4 billion. according to the Central Bank of UAE estimates."