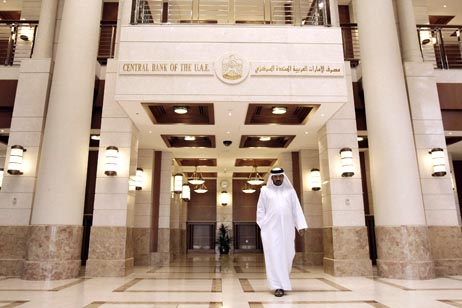 Feb 16 The Central Bank of the United Arab Emirates has issued draft rules aimed at getting banks to lend more to small and medium-sized enterprises (SMEs) after some lenders had cut their exposure to such companies or raised their charges.

Some banks have had to make huge provisions in the past 18 months against bad debt, much of it relating to SMEs, which account for around 60 percent of UAE's gross domestic product.

To guard against further defaults, some banks raised lending fees to the sector or withdrew from lending to such companies altogether.

In a draft regulation seen by Reuters and circulated to banks in recent weeks via the UAE Banks Federation (UBF), the banking industry group, the regulator said all banks had to have a dedicated unit in place for SME lending, steered by an SME lending strategy and policy.

It added that banks should have set targets and limits for SME lending and would be encouraged to support UAE national entrepreneurs. Banks would have to provide an explanation to the central bank in cases where lending to SMEs falls below their target.

Under the proposed new rules banks should not impose "unreasonable collateral requirements" in return for lending and should provide borrowers with explanations in cases where they refuse to lend to the sector or withdraw credit.

No one at the central bank was immediately available for comment.

A sluggish economy combined with low prices for oil and other commodities and a strong dollar pushed up problems for some SMEs, especially traders, prompting some to flee the country and their debts.

The dislocation in the lending market has risked undermining a push by the government to support SMEs and raise their contribution to GDP to 70 percent by 2021.

In return for supporting such companies, the proposed regulations would allow banks to lower the amount of risk-weighted assets they hold, a move that could free up capital.

The central bank will consult with the banks via the UBF on the draft rules before a final version is enacted, said a source familiar with the matter. (Additional reporting by Stanley Carvalho in Abu Dhabi; Editing by Greg Mahlich)