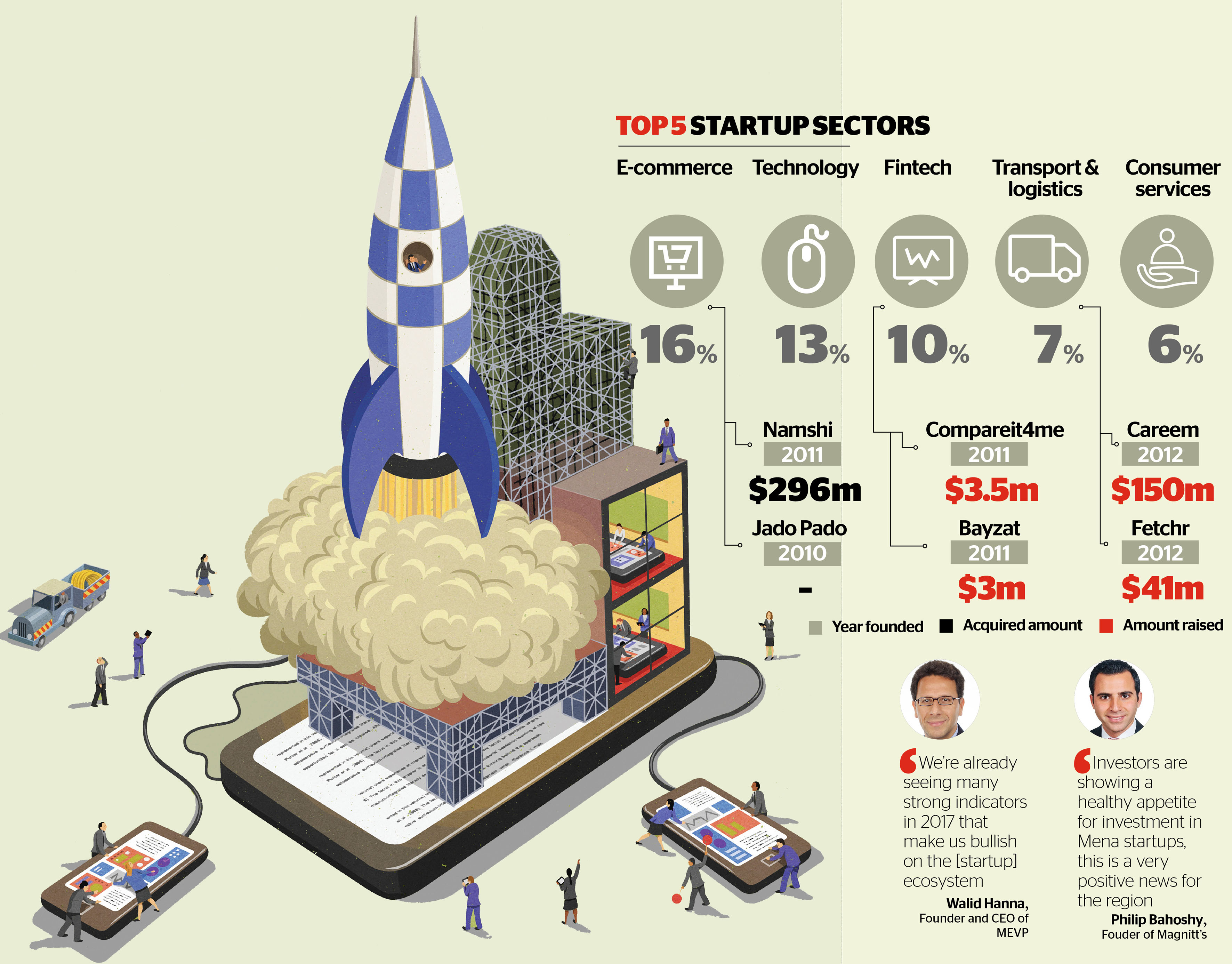 UAE, a boomtown for startups

Hey you with that smartphone... You are not only causing disruption but are adding to innovative startup ventures. Think about it, you dialled for Careem, bought a dress on Namshi, compared insurance, or credit cards on Compareit4me... these are just a few among a massive wave of startups in the UAE. Among all the key sectors, given the strong support from technology e-commerce, fintech, services, technology and transport and logistics have emerged as the most preferred sectors of investment by the entrepreneurs.

Top venture capitalists in the region are extremely bullish over the growth in the UAE startups as e-commerce recorded a growth of 16 per cent and continues to lead as the most popular industry for investment followed by technology at 13 per cent and fintech at 10 per cent, states Magnitt's H1 report which was recently released.

The e-commerce industry in the UAE is expected to hit the $10 billion (Dh36.7 billion) mark by the year 2018, regional retailers are in the process of consolidating their online presence in a bid to remain competitive and profitable. With the UAE's current e-commerce value estimated to be around $2.5 billion (Dh9.2 billion), analysts are optimistic that the region's e-commerce market is on an accelerated growth trajectory.

The UAE's high smartphone penetration, currently at over 70 per cent, has also been cited as one of the key drivers of e-commerce growth. This, according to Mallfortheworld.com, presents a golden opportunity for online shopping growth with 60 per cent of UAE consumers having made a purchase with their smartphone over the last 12 months.

The region is beaming with confidence as return on investment surges and top venture capitalists (VCs) are giving thumbs up. The VCs have been active with 14 of them investing in more than one startup from the Mena region, Dany Farha, CEO, Beco Capital, who is among the most active VC in the regions, states: "Absolutely, in data we trust. 2017 year-to-date is almost double the activity and growth in our portfolio companies from 2016, and we are all loading up our coffers to continue to invest in the future."

The Mena region in first half of 2017 recorded $290 million deals invested across 88 deals signalling strong funding and endorsing that H1 2017 exceeds full year funding of 2014 and 2015 showing strong signs of ecosystem growth. In these latest figures the UAE continues to see the lions share of activity with 30 deals valued at $230 million in funding. The deal flow is on the rise with 88 deals accounting for 70 per cent of 2016 disclosed deal flow.

Explains, Walid Hanna, founder and CEO of MEVP: "Last year ended with the announcements of Amazon's bid for Souq.com, and Careem reaching a billion dollar valuation, so the bar is already very high. But we're already seeing many strong indicators in 2017 that make us bullish on the ecosystem. We've already tracked nearly as many exits in 2017 as we saw in 2016 - with almost half of the year still left to go - and the exits (12 so far) are coming from both regional and international buyers. As venture capital institutions start to realise real returns, more investors and limited partners are hungry to capitalise on this growing opportunity - take STC's recent announcement of its $500 million fund called STV, or our own new MEVP Fund that shall be announced when the time is right. We expect the rest of 2017 to see a greater influx of capital into the region, which in turn will attract higher-quality entrepreneurs as well as create attractive acquisition targets."

The region has been bullish and Magnitt's founder, Philip Bahoshy, states, this is positive news all around for entrepreneurs and investors showing a healthy appetite for investment in Mena startups. There is generally a lag in reporting of startup funding because of confidentiality concerns and time to close deals and I expect there to be a further flurry of activity after the summer. In the first-half of 2017, 27 per cent of investment deals were made by angel investors (deals up to $500k) and 27 per cent were investments at seed stage ($500k-$2 million) showing active investment in early stage startups. Of the $140 million made in investments (excluding Careem's $150 million) Series B investment ($10 million-$50 million) took up 46 per cent while Series A ($2 million-$10 million) accounted for 36 per cent of investment value.

The first-half of 2017 also witnessed BECO leading the way with five disclosed deals in Myki, Vezeeta, Bayzat, Fetchr and Shedul. The startup firms like Careem ($150 million) Fetchr ($41 million), Compareit4me ($3.5 million), Iyzico ($3 million) and Bayzat ($3 million) make up the top 5 funding investments in Q2 2017. During same period exits continue to take place in Q2 with notable deals of Namshi to Emaar Hospitality groups, JadoPado to Alabbar Enterprises and Carriage to Delivery Hero to name a few. Bahoshy notes "there was a flurry of activity leading up to Ramadan and the summer". As noted in their previous report VC are investing to close out existing funds while simultaneously looking to close new funds which will no doubt create continued momentum into Q3 after the summer.

UAE, a boomtown for startups