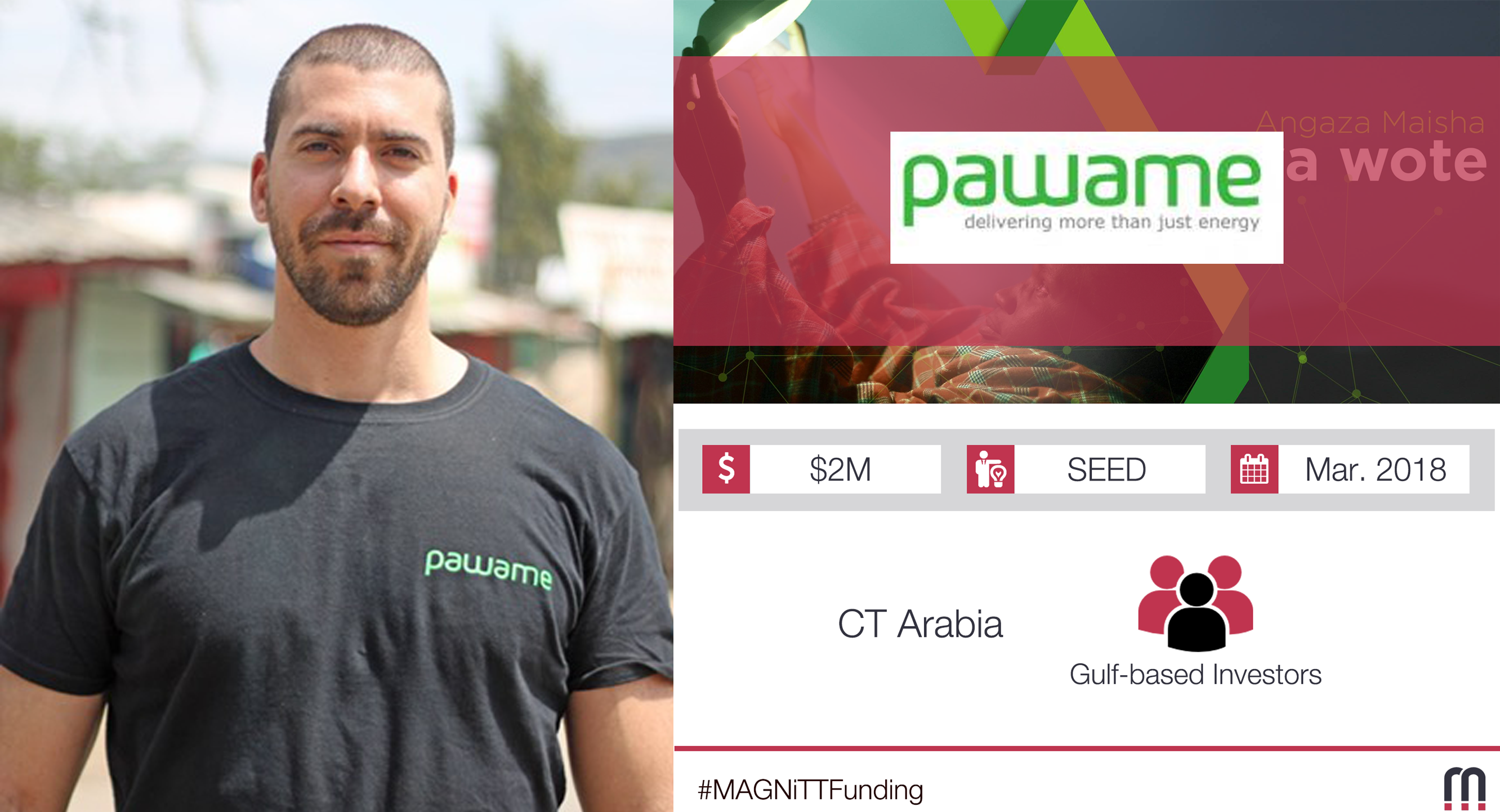 Pawame, a UAE based off-grid solar start-up, has announced that it has successfully raised USD 2 million in funding through Gulf-based investors for its operations in Africa.

Pawame aims to electrify 150 million households in sub-Saharan Africa that do not have access to grid power. The company provides reliable, cost-effective pay-as-you-go solar home systems to remote areas of Africa on a micro-finance basis, making it affordable for everyone. However, as mentionned in Forbes Middle East, "it is part of the larger green energy ecosystem that needs more investment. MAGNiTT's State of MENA Funding 2017 report found that the top startup sectors that received funding in 2017 were e-commerce, fintech and technology - energy didn't make the top 10".

Pawame's investors are primarily GCC based, with its largest shareholder being senior executives from the largest power utility companies of the Middle East.

Alexandre Allegue, Chairman and Co-Founder of Pawame commented, “We are delighted with this strong response from our investors. The funding raised will allow us to further accelerate our current growth momentum by expanding the Pawame’s footprint in Kenya and other parts of Africa.”

“Universal energy remains a long-term aspiration rather than a short-term reality as electricity is still out of reach for over 700 million people in Africa. The potential for Pawame to impact lives is significant, and we have already touched the lives of more than 20,000 people in Kenya by giving them access not only to lighting, but to other life enhancing services.” said Allegue.

Maurice Parets, CEO of Pawame, added, “Pawame’s business model is to grow sustainably, acquiring customers with its solar home system and collecting reliable data to build a trusted credit history. The company leverages customer’s credit scores as a gateway to providing families access to further life-enhancing products and services such as loans, insurance and access to TV/Internet. We are proud to be rapidly building a nationally trusted brand by providing best-in-class customer service and robust products to our customers.”

The company has received numerous accolades since its inception in 2016.  It was a finalist at both the prestigious New Venture Contest of Harvard Business School and at the SXSW Accelerator Pitch Event. Pawame was also most recently selected as a semi-finalist by the MIT Enterprise Forum for the Pan-Arab Region for the Innovate for Refugees Competition for its work in one of the world’s largest refugee camp (Kakuma). The company also participates in global initiatives such as USAID’s Power Africa collaborating with startups to mobilize funding and accelerate off-grid access, and entered a coalition this year with MasterCard to deliver technology expertise to transform refugee settlements into digitally-connected communities.

Speaking to The National, Philip Bahoshy, founder of the online start-up community Magnitt, said more start-ups in the region are now tackling innovation challenges in the solar and renewable energy space, with 30 listed on the Magnitt platform.

“Notably Pawame is another example of a UAE start-up benefitting from the growing ecosystem and regional investors that is targeting the African market further cementing the UAE as a hub for startups beyond just the Mena region.”

Pawame is on target to break even by the end of 2018, in just the second full year after its launch, and will soon launch a new funding round with strategic investors to accelerate its growth.

Pawame is an off-grid solar company aiming to electrify the 150 million households (70% of the population) in sub-Saharan Africa that don’t have access to grid power.  We distribute, finance, and provide after-sales support for residential solar home systems and more using an affordable rent-to-own, pay-as-you-go business model.  It’s an innovative approach to energy access that is “leapfrogging” traditional power lines the way that mobile phones did to landlines.

The electrification of our customers’ households combined with our pay-as-you-go technology platform, customer relationships and data enable us to offer further life-changing products like electrical appliances, other durable goods and education loans, all with the aim of making a meaningful contribution to global poverty alleviation.