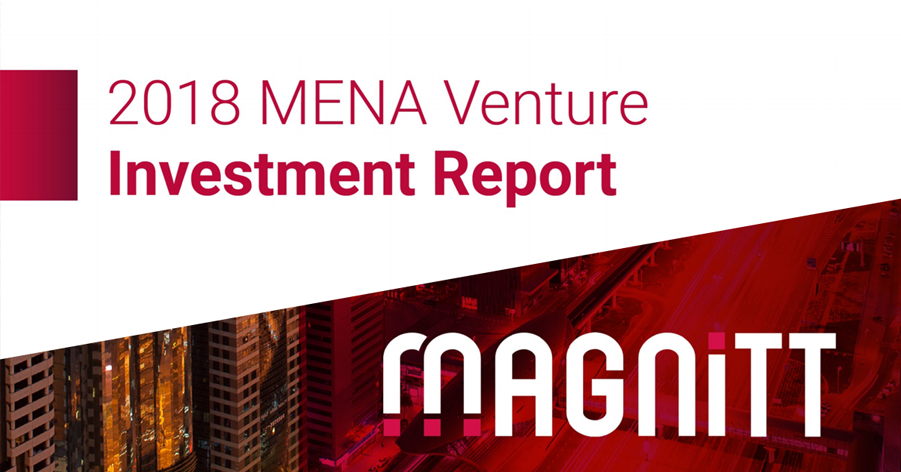 Total startup funding in MENA up by 31%, as revealed by MAGNiTT 2018 MENA Venture Investment Report

●  UAE remained the most active with 30% of all deals, followed by Egypt, which was the fastest growing

●  155+ institutions invested in MENA startups in 2018, 47% had not previously invested in the region

Philip Bahoshy, MAGNiTT founder and CEO, indicates “this is an extremely positive signal. 2018 saw more international investors enter the foray than before, new accelerator programs created the region, multiple government initiatives spurring innovation and established regional Venture Capital firms closing out new funds to deploy further capital." Another key highlight Bahoshy notes is "as startups mature and grow, 2018 has seen more later stage investment deals at Series B and beyond than ever before and we expect this trend to continue into 2019 as startups scale to get closer to exits.”

2018 saw 366 investments in MENA-based startups, which amounted to $893m of total funding. This is an excellent indicator for the ecosystem, with a 31% increase in investment compared to 2017, in which $679m was invested. The number of deals remained healthy at a record high, up 3% compared to 2017, showing continued appetite in startups from the region.

Christopher Schroeder, author of Startup Rising: The Entrepreneurial Revolution Remaking the Middle East, comments “Success breeds success. A new generation of startup founders are seeing, and have even worked for, amazing companies and are now applying the lessons learnt to new ventures.”

Interestingly, when excluding the outlier investments in UAE-based Souq.com and Careem, MAGNiTT highlights that 2018 was a record year in terms of funding, similarly up 31% to $693m invested in MENA-based startups. This is higher than any previous year on record, based on MAGNiTT statistics. This is another sign of the ever-maturing ecosystem and subsequently led to an increase in the average deal size in the region, up 26% year-on-year. 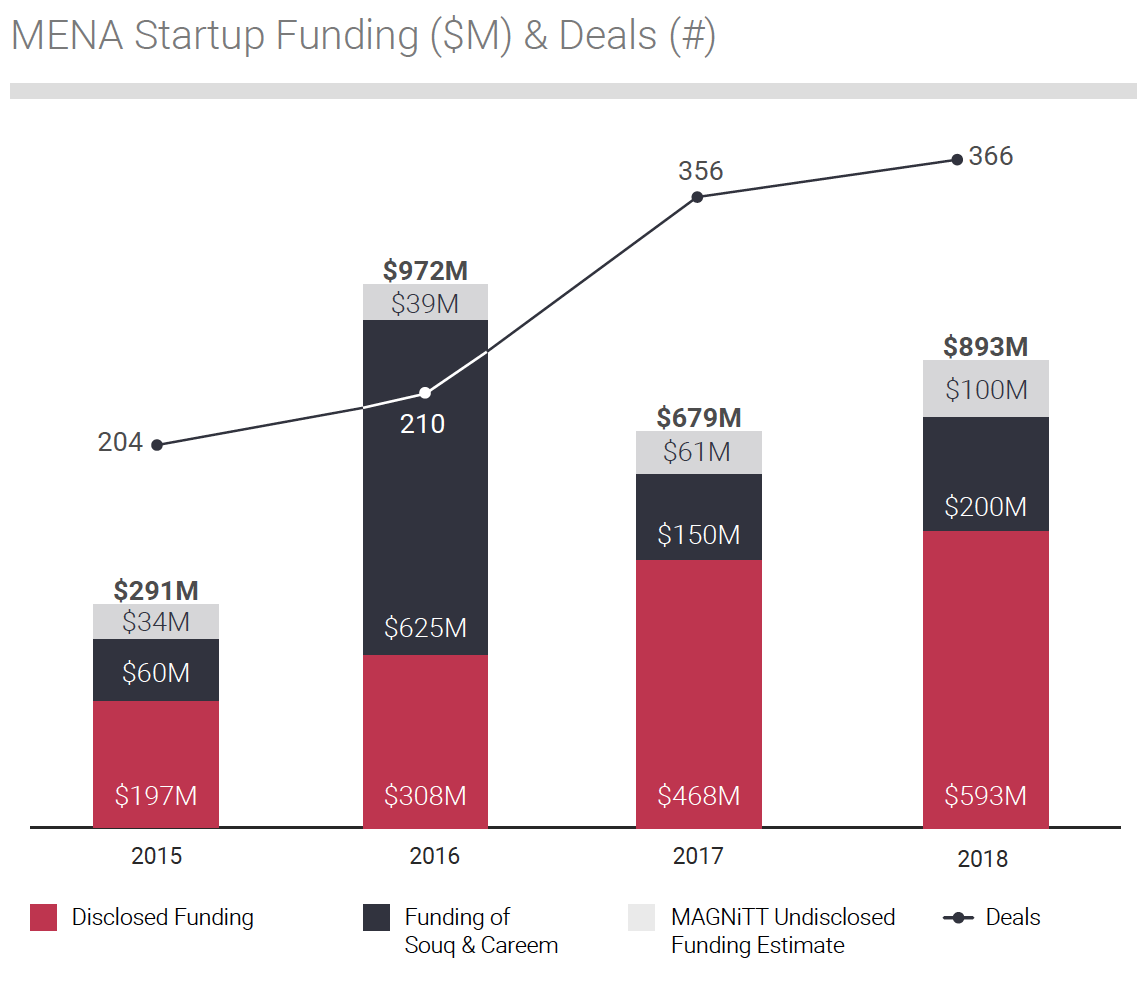 The UAE has maintained its dominance thanks to continued government support, corporate venture interest and growing investor appetite for startups. 30% of all transactions were made in to UAE-headquartered startups in 2018, while it also accounted for 70% of total funding.

However, the landscape continues to evolve. Egypt was the fastest growing ecosystem in 2018 – receiving the 2nd highest number of deals at 22% of all deals, up 7% from 2017. Lebanon, ranked 3rd by number of transactions with 10%,  saw the highest fall in deal flow compared to 2017, with a 4% drop.

“We see a strong push from governments to support the innovation space along with a significant rise in the quality and speed of growth of startups from the region” says Issa Aghabi, VC Investment Officer at the International Finance Corporation (IFC). 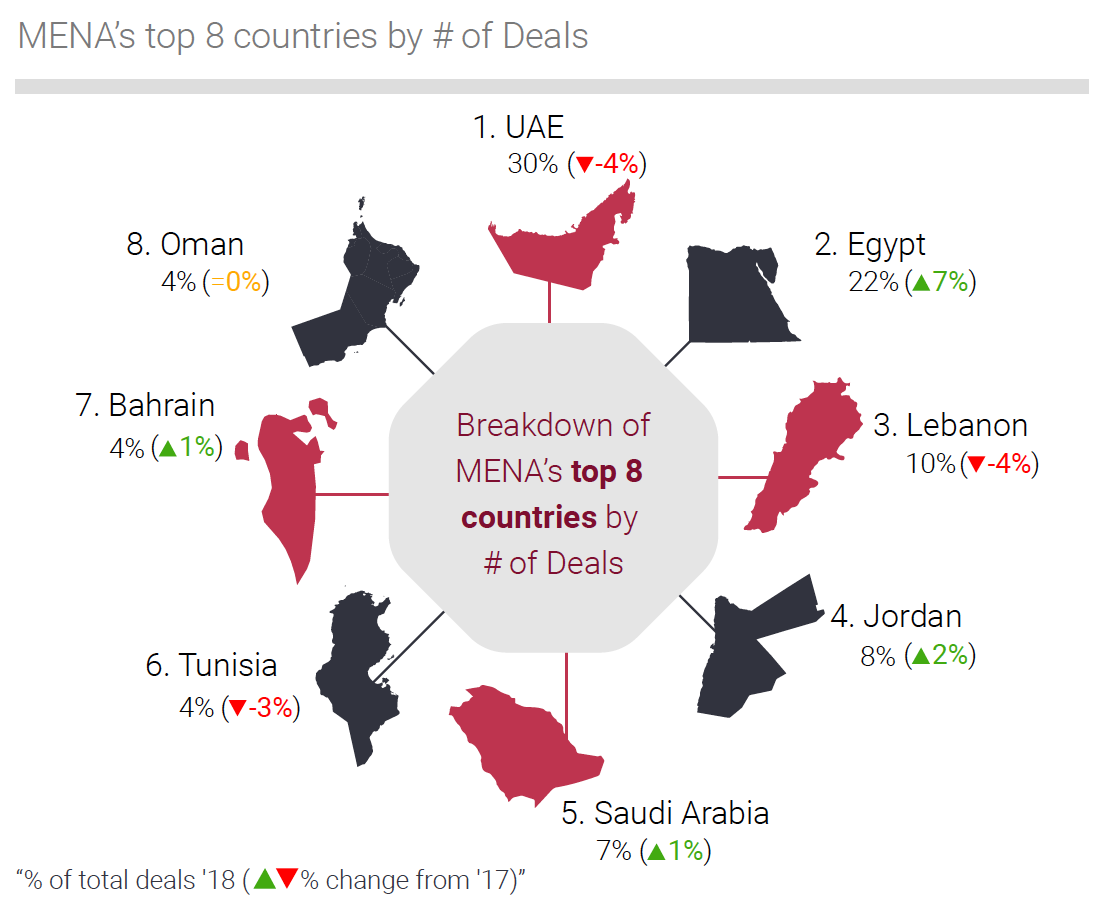 3. FinTech overtakes E-commerce as the most active industry by number of deals

In another sign of a shifting landscape, FinTech accounted for 12% of all deals in 2018. Notable deals include the $18m in Aqeed, $8m in Wahed Invest and $4.5m in Expensya. We also saw the major exit of TPay in Egypt, which brought about the first Dragon Startup, a startup whose exit pays back the full fund size of a VC.

Amir Farha, Managing Partner at BECO Capital and one of the investors in Wahed Invest, comments on the FinTech landscape in MENA, “Regulators are taking a more forward-looking approach to FinTech startups and are promoting their own initiatives to foster entrepreneurship. I believe Careem did a great job in helping regulators understand the impact startups can have on their market, which has likely assisted in getting the wider authorities to view startups differently”.

E-commerce still remains prevalent accounting for 11% of all deals, followed by Transport & Delivery, which was the third most popular industry in terms total deals in 2018, accounting for 10%.

4. 155+ institutions invested in MENA startups in 2018, 47% had not previously invested in the region

Speaking on the attractiveness of the MENA startup ecosystem to international investors, Taraec Hussein, VP at Beijing-based Gobi Partners, comments “We see many similarities between the MENA and Southeast Asian ecosystem in terms of macro-economic indicators, digital adoption and fragmented market. In addition, the MENA market lacks VC capital, which makes it more attractive for early & growth stage international VCs such as Gobi. We have always believed that returns are at its greatest when capital is scarce.”

Corporate Venture Capital continues to grow as well. Majid Al Futtaim, a key investor in Fetchr, continued their venture expansion with an investment in Wadi.com and acquisition in BEAM Wallet, while the Chalhoub Group launched their first accelerator program for the region.

In another shift, the Al Waha fund in Bahrain announced the launch of the first regional Fund of Funds, having already deployed capital in 3 VC institutions to date. It is anticipated that this will continue as a trend for regional governments into 2019.  “Our investment into VCs helps provide access to funding to regional startups, while supporting regional VCs with fuel to continue to do what they are best at, investing into leaders in the technology space”, mentions Areije Al Shakar, Fund Manager at Al Waha Fund of Funds.

5. Careem leads the startup ecosystem with a $200m fundraise, followed by Property finder and Wadi.com

Careem receives the highest amount of funding by a single startup, raising $200m in October 2018. The fundraise was the first tranche of its Series F funding round, and was led by existing investors STV, Saudi Arabia’s Kingdom Holding, Al Tayyar Travel Group Holding, and Japanese E-commerce platform Rakuten. The company expects to raise over $500m in its Series F.

Commenting on the result of the research, Bahoshy noted “these insights are positive news for the whole startup ecosystem in the MENA region. Founders continue to see increased interest from investors for this space, investors are seeing startups mature and see returns through increased M&A activity and exits, whilst governments see the fruits of their initiatives to further strengthen the ecosystem.”

The in-depth 2018 MENA Venture Investment Report looks at breaking down trends across industries, geographies, business models and stage, while also providing a review of the investor and accelerator landscape in 2018.

Total startup funding in MENA up by 31%, as revealed by MAGNiTT 2018 MENA Venture Investment Report