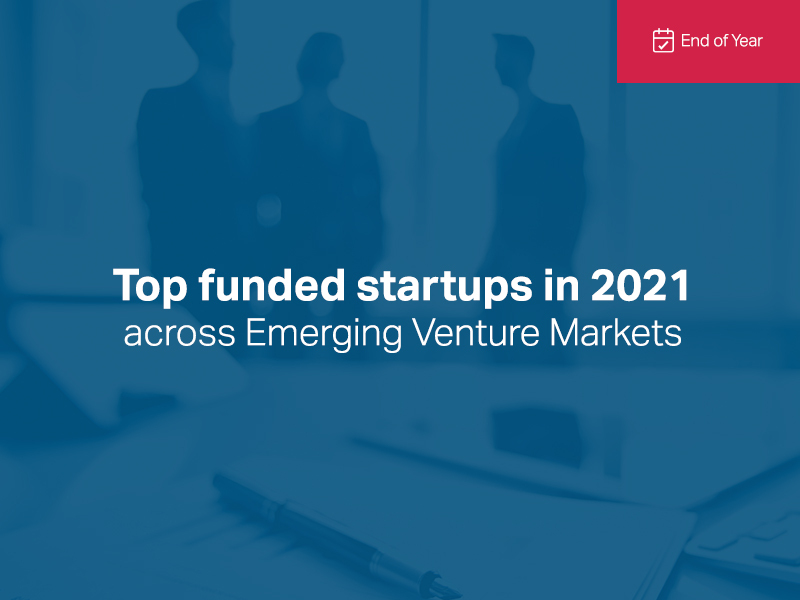 November 2021 made it pretty evident that all geographies in our Emerging Venture Markets (MENA, Sub-saharan Africa, Turkey and Pakistan) were heading towards a record-breaking year. MENA already doubled funding YoY, while Turkey raised an amount equivalent to MENA just in mega-rounds. Pakistan also registered its largest-ever funding round closed by Airlift Technologies.

Amidst so many ground-breaking developments happening in the year, we narrow down to look back at startups that came to dominate funding activity in 2021.

As our article last week demonstrated, quick delivery services gained rising popularity across Emerging Venture Markets in 2021. Ultra-fast Turkish delivery startup, Getir, was a shining example of this. The startup raised three mega-rounds throughout the year, starting with a $128M Series B round in January. Yet, this was the smallest of the three rounds the startup closed this year. Find details on all its funding rounds here.

The deals were supported by renowned VC firms like Sequoia Capital, Mubadala Ventures and Revo Capital, but Tiger Global Management was one to participate in all three of the year’s transactions.

The rounds pushed Getir’s valuation to $7.5B, up from $2.6B in the beginning of the year (source: CNBC). In an apparent ripple effect, rapid-delivery startups are sprouting up around the world. In India, Zepto, a 10-minute delivery app, closed a Series C round in December 2021 worth $100M.

Kitopi caused waves across MENA’s venture capital ecosystem when it closed the largest round the region has ever seen. The food tech company, currently employing a staff of over 1200, raised a Series C funding round in June 2021 sized at $415M. The deal eventually came to account for 37% of the capital deployed in UAE-based startups by the end of November 2021.

Some notable investors to back this deal were SoftBank, ADQ, Nordstar and Chimera Capital.

Before closing this mega-transaction, Kitopi had previously raised two round each in 2020 and 2018.

As MAGNiTT expanded to Sub-Saharan Africa this year, we are glad to have been able to consolidate venture activity in the bustling startup scene in the region. One of the leading markets, Nigeria, saw startups close rounds that turned heads around the world.

Fintech was the industry of choice in Sub-Saharan African (SSA) countries. The industry received the highest funding and startups closed the most deals by November 2021. One such industry startup, OPay, raised its Series C round sized at $400M. The deal was supported by the likes of Sequoia Capital China, SoftBank Vision Fund, and 3W Capital.

Aimed at making financial services accessible to a growing share of the Nigerian population, OPay is focused on mobile money services. The venture was valued at $2 billion (source: TechCrunch).

Previously, OPay had raised two subsequent rounds in 2019, after being formed in 2017.