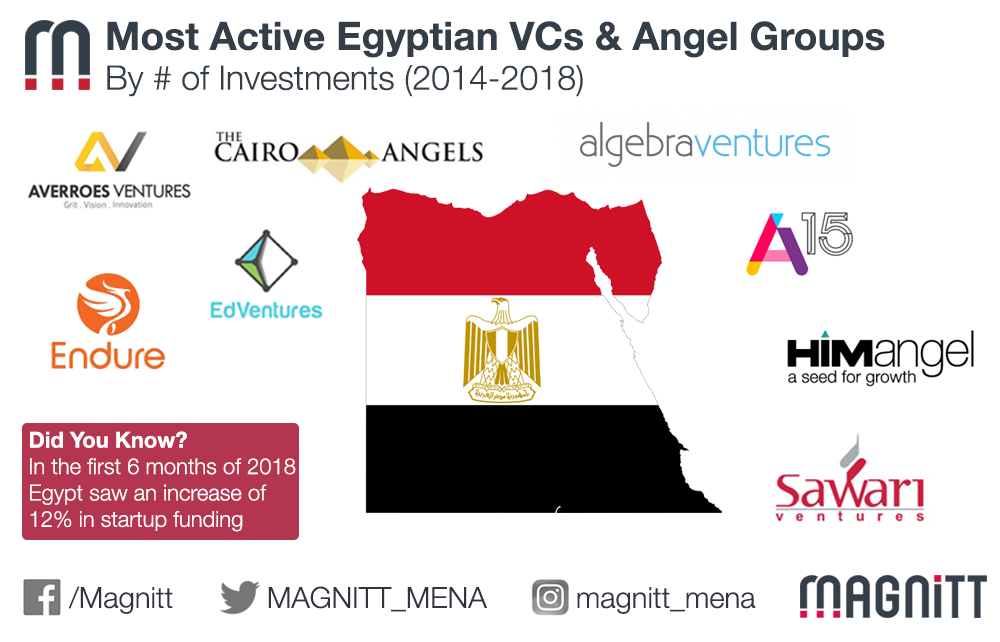 Who Are The Most Active Egyptian Venture Capital Firms and Angel Groups?

In the first 6 months of 2018, Egypt saw an increase of 12% in startup funding, emerging into the top 3 countries across MENA. From Accelerators like Flat6Labs Cairo and 1864 Accelerator, to Angel Investors such as Cairo Angels and HIMangel, and VCs such as Algebra Ventures, A15 and EdVentures, the investment eco-system in Egypt is maturing, having made over 135 deals from 2014 to date.

We highlight 7 of the most active Egyptian Venture Capitals and Angel groups in the startup space since 2014.

Cairo Angels is Egypt’s first formal angel investment network. It’s goal is to promote the startup scene in the region and turn Egypt into an innovation hub for businesses.  Since its inception in early 2012, Cairo Angels has invested in 25 Startups across 6 cities in the region. The network is based in Cairo, Egypt with a hub in London, UK and Dubai, UAE – it accepts members both virtually and physically at all 3 locations. The networks specialize in funding early-stage companies across all sectors that have readily developed products and are near monetization. Although Cairo Angels is sector agnostic, it is interested in tech-based startups that represent Egypt and the region.  Currently, its investments total to $2.2M and its most recent investment was in ORCAS, an online platform for babysitters and tutors. Other investments include a SEED stage investment in Bosta, an Egypt-based delivery and logistics startup, a $1.7M Series A investment in Instabug and $660K investment in FinTech startup Zoomal.

Algebra Ventures has established itself as the leading technology VC fund in Egypt. The firm targets high-growth technology startups and its areas of investment include core technology, e-commerce and fintech. Founded in 2015, the $50M fund is managed by Ziad Mokhtar, Tarek Assaad, and Karim Hussein. Algebra Ventures invested $1.5M in ElMenus in a Series A investment, as well as $1M in La Reina and $2M in Eventtus. Other investments include Goodsmart, FilKhedma, and POSRocket

A15 is an entrepreneurial company that invests in growth startups and helps them develop by providing them with monetary investments and other services such as HR, business development, finance, legal and others. They mainly invest in digital products and technology brands that have shown significant traction to the growth stage. As for their investments, most of them are SEED stage investments. These include participating in a $150K investment in Shezlong alongside Endure Capital and Karim Hussein and SEED stage funding in all of Tutorama, Paymob, Mumm, and Farawlaya among others.

Endure Capital is an early stage investment fund headed by Tarek Fahim and Waleed Khalil. The firm is founder-focused and looks for ideas and people that are resilient, resourceful and imaginative. Endure Capital targets products that solve genuine problems for users in large existing markets or rapidly growing ones. Some of their most notable investments include a $6M Series B investment in BasharSoft, $3M SEED stage investment in Waystocap and $1.3M in The Mednet. Whilst they haven’t been active recently, Sawari Ventures are one of the oldest VCs in the region. Founded in 2010, Sawari Ventures is a leading venture capital firm based in Cairo that invests in determined people and works to turn visionary ideas into market-leading companies in MENA. Since its founding, Sawari Ventures has gained experience in technology and built relationships with investment leaders world-wide. The firm's investments include SEED stage funding in all of Elves, SilMinds,  Kngine and Yamsafer.

EdVentures is MENA’s first Corporate Venture Capital firm that supports and invests in startups specializing in education and culture. Established by Nahdet Misr Publishing Group in 2017, EdVentures develops entrepreneurial companies by providing them with technical support,  different resources and services, and financial capital. Its main objective is to enable firms to be financially viable and freestanding. Amongst its enrollment options are incubators; where early stage startups are enrolled and receive an intense focused training to enhance their product. As for startups that have readily developing products, they are enrolled in the acceleration phase; where they receive support for quick growth and are aided to achieve traction. In 2018, EdVentures invested in five startups namely; OTO English, Books Bikes, Entreprenelle, Yo7ka Anna and Greenish. EdVentures enrolls new startups twice a year, and it currently has its application form opened (till the 23rd of July) for its new cycle.

Founded in 2017, HIMangel is a $5M angel fund that invests in Egyptian startups. The firm was founded by Khaled Ismail as the second fund of KIangel, an angel fund that Khaled started in 2012. HIMangel invests in Egyptian startups covering different verticals with more emphasis towards healthcare and waste management. Amongst its most notable investments, leading the investment round in the online mental health platform, Shezlong, and an investment in Nozol. Other investees include Awfar Market, Mogassam and FilKhedma. Overall, HIMangel closed 9 deals in its first year, in which its ticket sizes ranged from $100K to $250K.

Not sure what VCs or Angel Investors are? Click here to read about them.

Who Are The Most Active Egyptian Venture Capital Firms and Angel Groups?