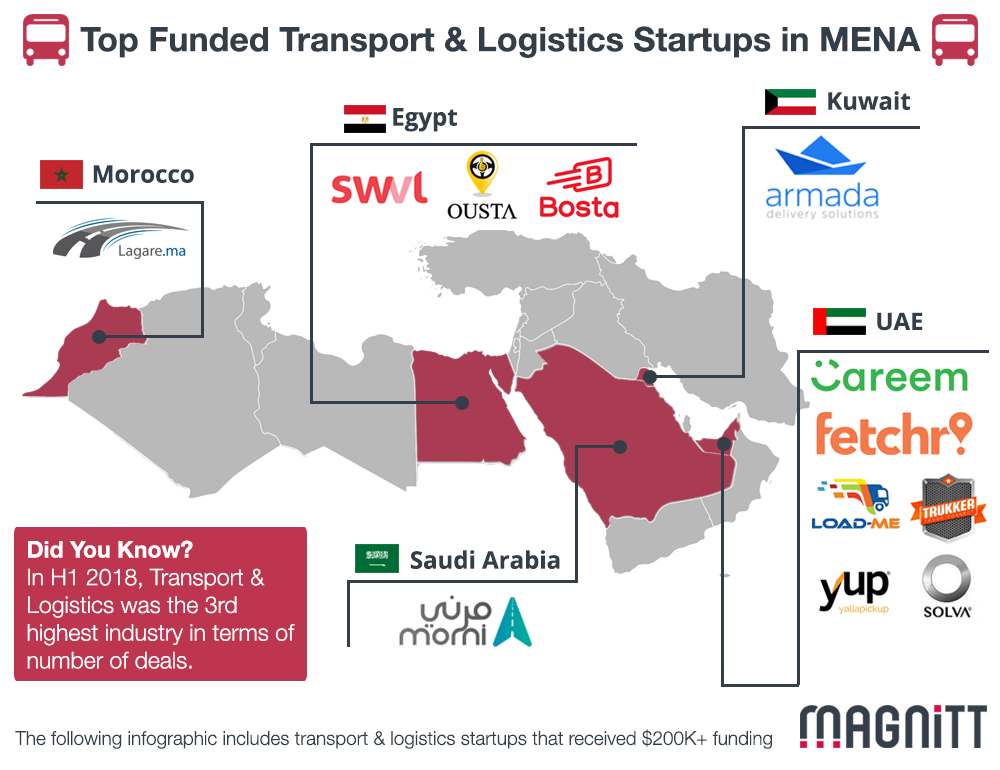 Transportation startups in the Middle East and North Africa are offering solutions for people who don’t own private vehicles or live in areas that are poorly served by traditional taxis. On-demand transport offered by startups allows the growing population in MENA to have access to quicker, more efficient, and in some cases cheaper, transportation. In 2017, there was an increased attraction directed towards funding transportation startups, as the industry was the highest funded that year, having received a total funding of $151M.

From storage to freight managing, and shipping to outsourcing, logistics startups too have created innovations in the region and attracted investors, having received a total of $75M in funding in 2017.

We highlight 5 of the highest funded MENA startups in the transportation and logistics industry since 2014.

Careem is a Dubai-based transportation app that currently operates in the UAE, Bahrain, Lebanon, Egypt and ten other countries in the Middle East and North Africa. The process of booking a ride on Careem entails opening the app, inputting your pick-up and drop-off location and sending a request. The UAE-based startup secured a $150M investment from Kingdom Holding and a series D investment from all of Endure Capital, BECO Capital, Lumia Capital, Abraaj Group, Wamda Capital, STC Ventures and Rakuten totaling to $350M.  Careem is the top funded startup in the Middle East and North Africa across all industries and the only Unicorn in the region.

Fetchr is based in the UAE and offers services to all of Saudi Arabia, Jordan, Oman and Egypt. The service company is technology driven and aims to transform the traditional way of sending and receiving packages. Instead of operating using the formal street address system, Fetchr uses the GPS in the user’s phone for location based pickup and delivery. Fetchr recently received a $41M Series B investment from Ra’ed VC. Other investments include a Series B funding from VentureSouq and an $11M Series A funding from Saned Partners and New Enterprise Associates.

Swvl is a mass transit bus transportation system that provides buses to various neighborhoods in Cairo. The network allows its users to book a seat through its app and share a ride in a van or bus during morning or evening commutes for a fixed flat fare with no surge pricing. In 2018, Swvl received a $8M series A investment from DiGame, BECO Capital, Silicon Badia, Arzan VC and OTF Jasoor Ventures. Other investments include a $500K SEED stage investment from Careem.

Ousta is a network of limousine drivers and companies that aims to assist people to commute easily from place to place. The network only relies on licensed and professional drivers to ensure that users get convenient, reliable, cost efficient and safe rides. By 2016, Ousta had already established itself as a key player in the ride-hailing industry in Egypt with 2,000 cars distributed across 5 cities. Ousta’s funding include a $1.3 Series A investment and a $1.6M SEED stage investment.

TruKKer is an on-demand truck aggregator moving everything from industrial cargo to home contents all across the GCC. Through a mobile application and web interface, TruKKer aims to eliminate issues in the road transport industry such as truck availability and price uncertainty. TruKKer offers its users services ranging from real-time tracking and status updates, guaranteed truck availability, cargo insurance to a verified crew and fleet. In mid-2017, the network received a $1.4M SEED stage funding from RTF, Ra’ed VC, Averroes Ventures and Arzan VC.

LoadMe is an online tool and application that provides a freight and truck matching service to its users. The network provides details of available trucks in real time helping carriers, brokers and shippers excel in the trucking industry. Since its founding, LoadMe has seen 18,000 trucks, 11,400 companies, 374,000 tons of cargo shared on its network. Since the platform was founded in 2014, it received a total of $1.5M funding from DP World, Prime Venture Partners and other angel investors.