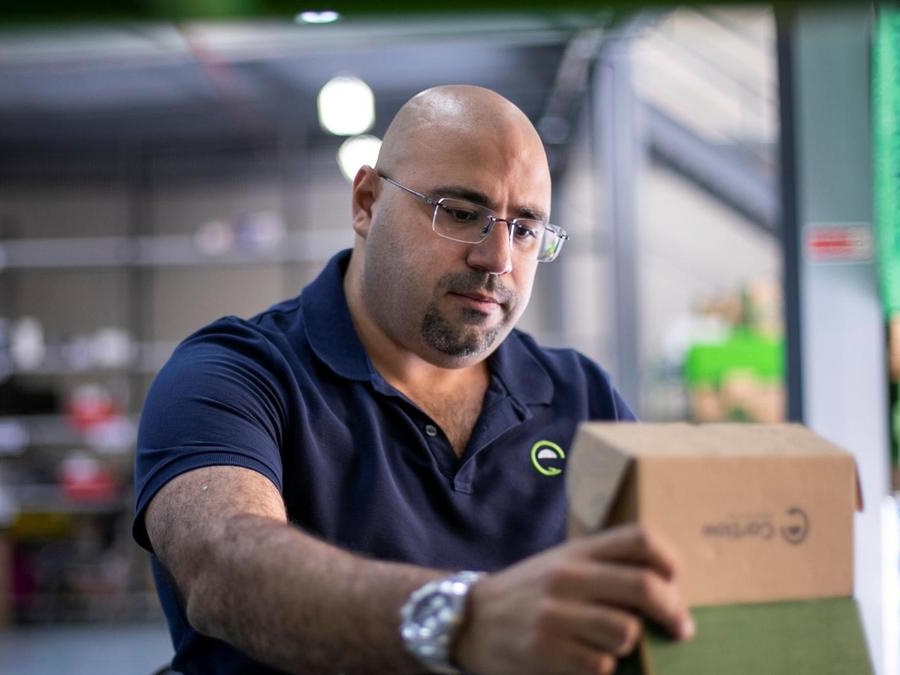 In an era when many are looking to reduce spending or cut down on consumption a fledgling ‘re-commerce’ business is seeking to provide a solution.

With the preloved market growing as more budget belts tighten, and some look to slash product waste, Cartlow has come at a fortuitous time.

Launched in the UAE last year, it delivers a simple yet efficient method for both retailers and customers to buy and sell a selection of certified pre-owned, refurbished, returned items and clearance products.

In fact, the retail model — slated as the first of its kind in the region — could make it a beneficiary of the Covid-19 crisis.

As shutdowns in China and other manufacturing strongholds strangle new product supply, demand is shifting to items already in the market.

“Supply chain disruption is the most significant impact of the virus within this space,” says Cartlow founder Mohammed Sleiman.

“Many suppliers today manufacture goods in Asia, especially within the electronics industry. But as the virus spreads even those that manufacture within Europe, America, and the region here will begin to feel the same challenges already arising in Asian manufacturing.”

He says as the crisis has become headline prevalent, Cartlow has witnessed an increase in traffic and time spent on the app the past few weeks as people look to avoid crowds in the malls, says Mr Sleiman.

“It is realistic to assume that e-commerce could see an increase in order volume, particularly on a module like Cartlow where consumers will become more conservative on spending as well,” he adds.

With or without the Covid-19 situation, the web-based newcomer gives a high-tech boost to both sides of the retail spectrum; shoppers access lower prices on everyday products while the retail division benefits by regulating inventory, as well as eliminating unsustainable practice.

In other words, bargain hunters’ pick up a deal, retailers recoup value from excess stock and less ends up in landfills.

“Anything and everything has a demand when offered at a right price,” says Mr Sleiman.

The global sharing economy is growing as consumers aim to live more sustainable lives and save money by sharing possessions and services. Sixty per cent of residents engage in the second-hand economy either through buying or selling, according to an April 2019 poll of more than 1,000 UAE residents by classifieds site dubizzle, with used electronics the most-sold items.

That online platform, which focused on pairing residents with every day services such as plumbers and mechanics, was acquired by Amazon — the exit proceeds of which Mr Sleiman invested in his new venture.

Mr Sleiman says the regional re-commerce solution has already partnered with leading retailers and distributors in the region to access inventory.

“Retailers and other distribution channels discard millions of returned and overstock products every year because they lack processing capabilities to re-sell them,” says the entrepreneur.

“Most of these items are fully functional. However, company regulations or unsustainable practices make it easier for many retailers to simply throw them away or sell them at low retrieval rates.”

Cartlow says it offers retailers an alternative solution, namely a better ‘disposal’ price while marrying registered buyers with these items at a discounted price.

“The refurbished and used market is attracting a significant customer base, in both developed and non-developed countries,” says Mr Sleiman.

“Cartlow came about to structure and raise the bar of the pre-owned industry by considering the customers’ needs and working on a plan to take this on to the next level by providing value-added services such as warranty and logistics.

“This is a win-win situation for both buyers and the stockiest as one bags the best deal and the other clears unsold stock.”

Mr Sleiman’s team operates a grading operation to guarantee the quality of items shipped into and out from its Dubai Investment Park unit.

Pre-owned, refurbished and returned goods, ranging from mobile phones, tablets, laptops, TVs and home appliances to watches, toys and audio are expertly-tested and certified, with up to one-year warranty.

Prices depend on category and condition, but on new items — where a box has been opened or damaged — Cartlow’s price difference versus the recommended retail price (RRP) ranges from 20-40 per cent. On pre-owned stock, it aims to provide up to 70 per cent discount over the RRP.

A section of the business also assists consumers to sell pre-owned products through a ‘buy-back’ programme, where functional gadgets are refurbished by Cartlow's team, and resold. Inoperable products are dismantled and recycled.

The UAE is considered one of the top markets in the region for online retail sales and services and the refurbished and pre-owned industry alone is estimated to be $3 billion within the UAE and Saudi Arabia, says Mr Sleiman.

He cites the sustainable environmental benefits of Cartlow’s service, empowering retailers and distributors with a solution to sustain healthy inventory, while also reducing waste and carbon emissions through recycling/reselling.

“We reuse most of the parts we salvage to extend the life of a product that could work perfectly if those parts were replaced," he says.

“We aim to digitally structure the industry with a trusted channel, while leading the way towards illuminating unsustainable practices and steps to save the environment.”

Despite e-commerce rivals, with the likes of Amazon and Noon.com selling refurbished goods, Mr Sleiman says Cartlow’s product categories are broader, beyond the mobiles and tablets focus of others.

He adds that his app also competes on price and typically offers a nine-month warranty on an iPhone compared with three to six elsewhere.

“We provide a re-commerce solution while Dubizzle and other players within this industry are more classified, peer-to-peer channels,” says Mr Sleiman. “Our main objective is to raise the bar on pre-owned stock from different perspectives: trust, quality, logistics and affordability.”