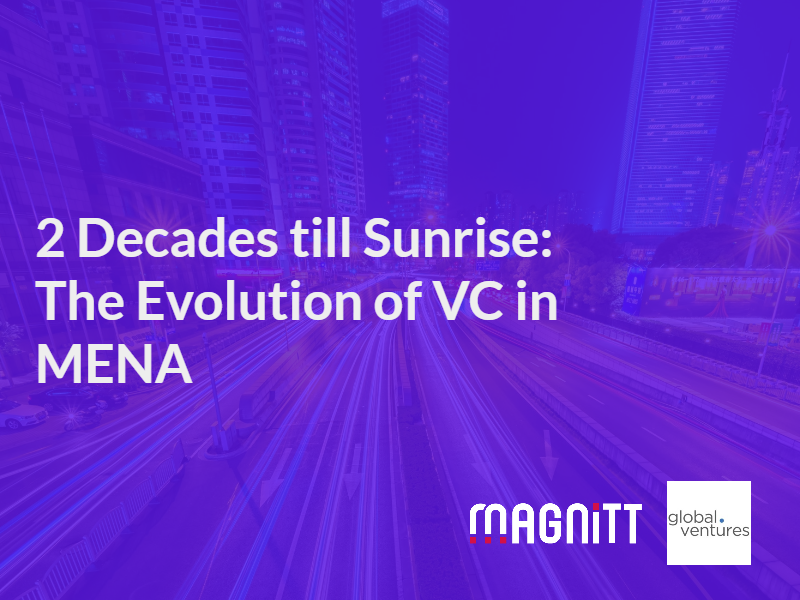 2 Decades till Sunrise: The Evolution of VC in MENA

3 months into the second half of the year and VC activity seems to still be in top gear, continuing the most exciting year for the VC ecosystem across Emerging Venture Markets. As we release our full suite of Q3 2021 EVM Venture Investment Reports, covering the most active Venture Spaces and the Top Industries across MENA, Turkey, and Pakistan (MENAPT) we highlight record-highs in fundings, exits, and deal flow by Q3 2021.

As recorded in our Q3 2021 MENA Venture Investment Report, Q3 marked the second-highest record of funds raised in a quarter driven by a 307%YoY growth in investment as compared to Q3 2020. MENA startups are not only observing a record influx of capital, with a 4-year consecutive growth of foreign investment accounting for almost 40% of all capital raised by Q3 2021, but also an overall general uptick in deal flow in 2021YTD. Egypt climbing a rank to become the most active ecosystem in MENA by mumber of deals, surpassed the UAE and KSA, all three closing more than 70% of all transactions by Q3 2021.

However, as we record an unprecedented MENA VC growth, we reflect on the early stages of this booming ecosystem, realizing that the VC ecosystem in Emerging Ventures Markets wasn’t always filled with grand exits, Megadeals, and scale-driven expansions. Tracking and taking part in the gradual yet impactful growth of the startup ecosystem is UAE-based VC Global Ventures. Leading and participating in major rounds this year funding anticipated startups like Tabby, Arrow Labs, Minly, and Yodawy Global Ventures have built a portfolio of unique regional startups with international potential. The Global Ventures team shares with MAGNiTT some critical insights into 20 years of VC evolution in MENA:

In the year 2000, while 1,700 venture capital funds in the US made 8,000 investments amounting to $119Bn, the UAE, home to just 6 venture capital funds at the time had only recently inaugurated the Dubai Financial Market and opened Dubai Internet City to mark the inception of the country’s tech ecosystem.

In the early years of the millennium, even as the UAE began to grow into its futuristic image with the launch of the metro in 2009 and the inauguration of the world’s tallest building in 2010, startups in the region still struggled with proportionate access to capital. The ecosystem had grown from 6 firms in 2000 to 31 firms in 2010, yet over 50% of the VCs that exist in MENA today were still to be formed. Even though sources of available capital had increased over time, VCs in the early days remained cautious with ticket sizes and founders faced limitations in the amount of accessible funding. As a result, companies were forced to part with substantial equity to raise meaningful funding, leaving founders considerably diluted in early stages of growth (as high as 50% in some cases!), which deterred institutional investors from participating in future rounds, leading to similar capital constraints even in later stages.

2010-2020 was a transformational decade for the investment landscape in the MENA region. During these years, new venture capital firms, incubators, accelerators, and angel groups began to sprout across the region, eventually accounting for 80% of new investment firms in MENA by 2011. The region experienced a 47% CAGR in total funding and a 60% CAGR in number of deals between 2010 and 2020. During these years, the predominant exit valuation for over 1/3 of exits fell between $10M and $20M, and the capital deployed was largely directed towards early-stage companies, with $3.3M being the highest average ticket size.

The uptick in investment activity in the region’s ecosystem came from MENA-based investors but was also propelled to a significant extent by international interest. According to MAGNiTT, around 40% of investments in UAE-based startups in Q1 2021 came from investors outside the region. Egypt faced a similar shift in dynamics, evidenced by the $5M investment in digital banking startup Telda led by Sequoia Capital, marking the Silicon Valley-based firm’s first move into the region. Other global VCs such as Wafra, Lumia, Global Founders Capital, 500 Startups, Softbank and AppHarvest have also made investments in the region in companies such as PureHarvest, Kitopi, Mamopay, Red Sea Farms and Eat.

There are several factors driving change in the landscape. First, favorable demographics. The region has the largest youth population in the world, with more than 50% under the age of 25. Internet penetration stands at approx. 72% compared to the global average of 60%. The presence of a young, technologically savvy society, creates an audience highly suited for the adoption of innovative digital solutions. Second, improving regulatory environments. Government across the region are allocating more capital and introducing new frameworks designed to incentivize investment, both from regional investors as well as international. Third, notable exits. Due to high-performing investments driving confidence in the MENA region on the world stage, later stage deal activity has increased by 32% and the average ticket size is up by 35% in 2020. Key success stories include Amazon’s acquisition of Souq.com, Fawry’s $100M IPO, Swvl’s $1.5BM SPAC merger, Uber’s acquisition of Careem, and DeliveryHero’s acquisition of Instashop. According to MAGNiTT, startup funding in the MENA region broke the $1 billion record of FY 2020 in H1 2021 alone. Kitopi’s $415M Series C was largely responsible for the record-breaking milestone, along with Tamer Group’s acquisition of Mumzworld and Zip’s acquisition of Spotii. The prospect of transactions moving towards Series C and beyond is likely to invite even more institutional capital into the region.

A mere 20 years on from the formation of the UAE’s tech investment landscape, it is safe to say that the region has come a long way. The presence of diversified sources of capital along with the recent surge in domestic and international investment activity creates a landscape that is highly conducive to the emergence of sophisticated tech solutions. Founders in the region are primed to benefit from an increasingly mature ecosystem that is more capable now than ever before to support accelerated growth leading to eventual exit opportunities.

2 Decades till Sunrise: The Evolution of VC in MENA