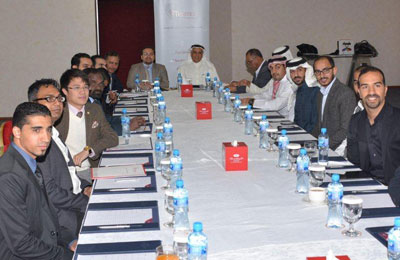 Tenmou, Bahrain's first angel investor firm, has invested BD500,000 ($1.3 million) in 18 start-ups since its inception in 2011, a report said. The company's top officials told a Press conference held at the Crowne Plaza Hotel yesterday that five new business ideas had been chosen to receive funding and mentorship, enabling them to commence operations, reported the Gulf Daily News, our sister publication. The start-ups include: uTrack, a company offering live online coverage of sports events; Spades Studio, a multi-use photography studio with equipment for hire; Onebox Solution, an e-learning content and platform provider; Eat, an online reservation system and Fish Transporter, fresh and cooked seafood delivery service. "These companies are part of our country's promising digital sector and will be paving the way for many more," Tenmou chairman Sami Jalal said. Tenmou chief executive Hassan Haider said the firm's strategy was to enhance entrepreneurial culture among the local population, which would play a key role in driving innovation and development. "Since the initiative was started in 2011 with a capital of BD1 million, there has been a surge in the number of applications. "The selection process has been highly competitive and around 150 applications were received for the fourth batch," he added. Applicants were evaluated based on the uniqueness of their ideas and the potential for regional, and perhaps even global, expansion in the future. The individual entrepreneurs behind the ideas were also assessed for both their practical skills and their passion for their respective propositions, Haider said. Tenmou invests an average of BD20,000 for a stake of about 20 per cent in each project that meets its criteria. It also provides a three-month mentorship period, including support services, at no cost to the entrepreneurs.