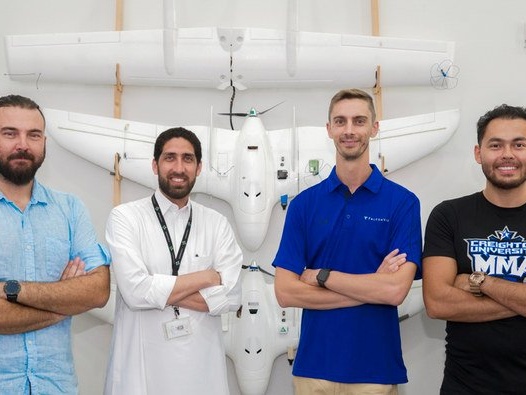 A Saudi startup is cashing in on the popularity and availability of drones in the Kingdom.

FalconViz, which is based at Thuwal’s King Abdullah University of Science and Technology (KAUST), takes its name from the national bird of Saudi Arabia. It is also an abbreviation for the data visualization services offered to clients.

“We mainly focus on 3D surveying and mapping, inspections, construction monitoring, and the visualization of data after it is captured by the drone,” Anas Dahlawi, the company’s co-founder and general manager, told Arab News.

It was established in 2014 with the support of the KAUST Innovation and Economic Development Center. Its co-founders are Neil Smith, chief technology officer and a KAUST Visual Computing Center (VCC) research scientist; Luca Passone, chief technology officer; Mohamed Shalaby, vice president of business development and a VCC senior research scientist, and Dahlawi. The company has 22 employees, 60 percent of whom are Saudis, and 13 percent of whom are women.

The idea for the business began with a chance meeting between Smith and Passone during which they decided to create a 3D model of King Abdullah Mosque using visual data collected by drones fitted with cameras. The vice mayor of Jeddah visited their lab and saw the model they created.

“He was blown away by the quality of the reconstruction and was very keen to have the same done for the Al-Balad historical district in Jeddah,” Passone told Arab News. “From that point, we took the idea and turned it from a research topic into a company. “Even before we started looking for clients, somebody came to us with ideas on how we could use these technologies we were developing for commercial purposes.”

Al-Balad has been recognized as a UNESCO heritage site. FalconViz used laser-scanning technology and photogrammetry (the use of photography in surveying and mapping to measure distances) to map out Al-Balad. It was able to reach previously inaccessible areas through using drones.

Passone said that staff worked hard to push the boundaries of data visualization by using new techniques to process the large amount of data collected by drones on small computers.

“Now it is a perfect time for drones,” he said. “Six years ago, they were just something for hobbyists; since then, drones have advanced in technology and abilities, allowing us to develop more practical and innovative uses and applications.”

Founders received financial and training support from KAUST for a year before the company was officially registered in Saudi Arabia.

“They sent us to Turkey to a startup boot camp so that we could learn how to transform from scientists and researchers into entrepreneurs and business owners,” said Passone. “Initially, this step was quite a hard transition but slowly, with the help of some of our mentors, we were able to learn (on) the job.”

The company continues to develop and grow as, with each new client, employees come up with new ideas for using drones and improving workflow. Unlike many of its competitors, the design, manufacture and performance evaluations of Falconviz’s drones all happens in Saudi Arabia, and is customized to the requirements of each client.

It was a struggle to convince potential clients to change their way of doing things and try a new, advanced technology, even with the promise that it could scan and gather data without interrupting any work that was underway, Passone said. Now the company had a different challenge.

“We need to hire more people to keep up with the high demand,” he said. “We have many clients coming back to us with new areas that are bigger and in zones that are harder to access.”

Dahlawi said the company was contributing to “a lot of mega and giga projects happening in Saudi Arabia,” but that it also aimed to make its mark internationally. He added that FalconViz measured its success by the impact it made “not just on the local but on a global level.”

“We are here as part of KAUST, and part of our goal for making an impact is driven from that incubator,” he added.

FalconViz has opened offices in the US and Egypt, and has collaborated with international partners as part of the company’s expansion strategy.

“We would like to expand and be able to fulfil the whole pipeline in other countries, starting from the Middle East,” said Passone.

FalconViz was honored by Forbes in 2016 as one of the top three innovative companies in Saudi Arabia, and in the UAE it was nominated for the Drones for Good Award, ranking fifth among 800 participants. The company’s drone pilots are licensed by the Saudi General Authority of Civil Aviation.