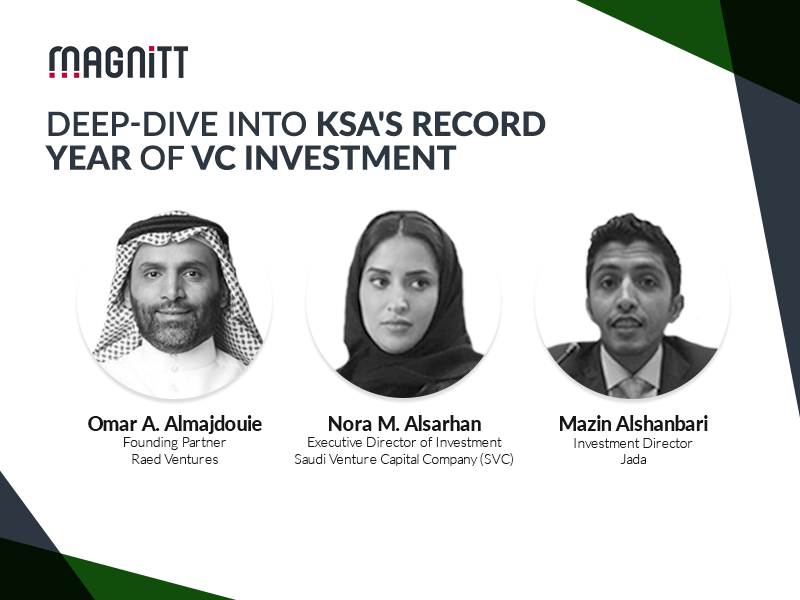 On the back of our new 2020 Saudi Arabia Venture Capital Report, sponsored by Saudi Venture Capital Company (SVC), MAGNiTT Founder & CEO Philip Bahoshy hosted some key stakeholders from the Kingdom's ecosystem to explore key trends from last year and what to anticipate from one of MENA's thriving venture spaces in 2021.

Check out the full discussion, and watch the Webinar below:

• Fresh injection of investment by Jada and SVC, private sector stimulus’, and the ease of regulation in the last two years has helped increase the number of startups, investors, and the value of investments in the country.
• The perception that KSA is closed is inaccurate; there is a level of inclusion and openness that has created momentum not just in the entrepreneurial side but also in the funding aspect - increasing numbers of FDIs are getting involved in deals, along with the backing of SVC and Jada.
• Government initiatives are helping to attract foreign investments.
• International interest from Silicon Valley/Asia has been growing over the last 2-3 years. We are seeing big names participating in later stage rounds.
• A foreign fund setting up in KSA is tricky.
• Competition is healthy; international companies coming to KSA to compete at a service or product level will breed better companies.
• Startups in KSA are expanding beyond the region and it's viable to think about scaling globally.
• KSA startups are placing a spotlight on the Pakistani market.
• Q1 2021 will see a growth in the number of deals due to acceleration programmes.
• Dealflow is slowly being built up
• Several funds now have an allocation for venture building.
• There will be an increase in growth, later-stage deals.
• International LPs are showing more interest as well as government funds from other countries in Southeast Asia/Europe who are interested in investing in local and regional venture capital.
• There needs to be cross-collaboration with cities such as Dubai, Cairo and, Beirut to break down fragmentation, create the best synergy between countries, and to create opportunities for FDIs to come to the region.

Receiving too many emails? Keep your inbox clean by updating your preferences to the MAGNiTT newsletters that matter to you most.