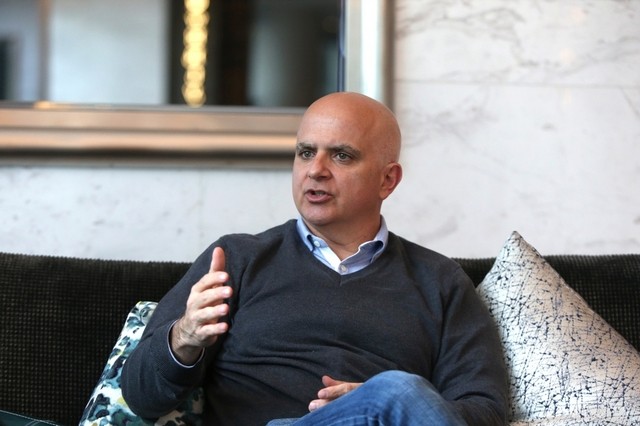 Start-up generation rises in the UAE

SOURCE: The National - Start-up generation rises in the UAE

In his vivid and groundbreaking book Startup Rising: The Entrepreneurial Revolution Remaking the Middle East, the American Christopher Schroeder has chronicled the efforts of the Aramex founder Fadi Ghandour, Maktoob’s Samih Toukan and other pioneers of the region’s e-commerce and internet-related businesses.

From his vantage point as an investor, Silicon Valley insider and a successful entrepreneur himself, Mr Schroeder has been able to put the story of our region’s start-ups into a global context. As a result we learn than we cannot take the Fadi Ghandours and Samih Toukans for granted, and that it was not inevitable that the Middle East would have its own tech companies in the absence of their tenacity and vision. He also believes that, thanks to the work of the early few, an entire generation of entrepreneurs could be about to benefit.

"In America, in Silicon Valley, they actually call it the ‘PayPal effect’ because once you become very successful a bunch of wealthy people are created to put money into the ecosystem but then you have experienced entrepreneurs who have done it before. So it’s not a surprise that PayPal kicked out Reid Hoffman of LinkedIn, Elon Musk, and Max Levchin [the chief executive of the digital lending start-up Affirm] and literally hundreds of other people," says Mr Schroeder in an interview with The National in Dubai.

Mr Schroeder’s travels in and around the region over much of the past decade have helped him to challenge the typical narrative as told in the United States of the Middle East as a place of conflict and stagnation.

He also has the credibility, as a co-founder of HealthCentral.com and an adviser to George HW Bush’s administration, to be heard in Washington, New York, California and elsewhere in America – even in conservative circles. He likes to trigger what he terms "a-ha! moments", when he highlights the exciting developments here and the talented men and women driving them.

Last month, Amazon agreed to buy the UAE e-commerce company Souq.com for a figure reportedly in the region of US$650 million, representing the largest ever exit for a Middle East and North Africa start-up.

The deal has triggered excitement across the economy with consumers and rival online retailers calling it a watershed moment.

"I believe that we are going to be talking in a few years of the Souq.com effect because [Ronaldo Mouchawar, the chief executive of Souq.com] is going to kick out a bunch of entrepreneurs and people with wealth that will put this back into the ecosystem, create better companies and more companies and jobs and that’s the flywheel of success that I think will happen here as well," says Mr Schroeder.

There is data to back up his thesis. According to research from Magnitt, a networking site for investors and entrepreneurs, 35 per cent of founders of the Mena region’s top 100 start-ups have previously worked at leading regional e-commerce companies such as Yahoo Maktoob, Dubizzle, Bayt and Zawya.

Mr Schroeder says it is much more likely that entrepreneurs who have been there and done it at another start-up will be that much more successful in their next enterprise.

"One of the hard things of [start-up] ecosystems is the experience curve of people who have not done it before; it’s not just entrepreneurial spirit, of which there is plenty in a place like the Middle East, but there just hasn’t been until the last 10 years real pattern recognition and the experience to do it."

The excitement over Souq and Amazon perhaps overlooks previous exits for regional start-ups including one of the first serious acquisitions by a global company in this space, Yahoo’s deal to buy the Jordanian Arabic portal Maktoob in 2009 for $165m and, more recently, Rocket Internet’s $170m takeover of the Kuwaiti online food delivery platform Talabat two years ago.

Mr Schroeder does believe that the Amazon acquisition of Souq is likely to mark a shift in attitudes from potential investors and entrepreneurs alike. To a new generation coming into their inheritance or moving up in their family businesses, the opportunities will be obvious. This could trigger a "cavalcade", he says.

"Success breeding success is so powerful. Which is why with what has been rising here and what has been happening with Souq it is not only having a lot of people saying ‘I can see big money here’ but even before [the Souq-Amazon deal] with Noon.com and a lot of others you have seen other very wealthy people coming in and saying ‘we need to participate here because I get the demographics of where this is going,’ who say ‘I know where this world is going and I have to participate.’"

This could help to alleviate the biggest "ankle-weight to the ecosystem here" – a lack of access to money at key stages.

"It’s not the talent, it’s not the market size, opportunities, access to technology, it might be access to engineers and elite educational institutions somewhat, but really the biggest thing is money. Money, not just in the early stage but the money to bridge these folks to bigger output. One of the great frustrations I have seen in the Middle East is that kids get more and more seed capital – early stage money – than ever before but when they need $10m or $20m – it’s not big enough for private equity – but it is big enough to help them get to that stage, very often it is very hard to find."

Investors such as Mr Ghandour are already raising cash for new funds and Mr Schroeder thinks the money issue will be solved within the next five years.

There has already been a perceptible change, with Dubai’s Sheikh Zayed Road dotted with new outdoor advertising for e-commerce and online retail brands.

As the momentum builds and more money floods in, there is also the concern that assets could quickly become overvalued.

"There is so much growth opportunity, not only in new technology – in genomics and AI and VR – which are going to revolutionise the way we think of each other. But remember that there are billions of people now who are only beginning to have a feature phone, they will all have smart devices within the next few years and it’s just going to open up and revolutionise opportunities," he says.

"To think writ large there will be a bubble, I don’t even think we are close."

The result of all of this could be "the effect of the network of talent" in the UAE, similar to what has been happening in Silicon Valley, which is enjoying its moment as one of history’s "unique hubs", on a par with Cordoba a 1,000 years ago and Renaissance Florence 500 years ago, according to Mr Schroeder.

"Because of the universal access to technology, software, smart devices and more, people can start innovating and actualising cost effectively, anywhere in the world, and there will be geographic hubs because people like to be around people and places they like, [where] the rule of law helps them succeed. I don’t think Dubai will be the Silicon Valley of anything. Dubai will take lessons from there and elsewhere in the world and do something which is quite unique to itself and to the region overall and that is essential."

Can we learn lessons that seem to have caught up with some of the biggest technology companies in the world? In the United States and Europe, Apple and Google are under fire amid a populist backlash that accuses them and their peers of costing taxpayers jobs and their governments income that should be taxable.

Mr Schroeder says a key point has been missed regarding the technology sector – that it is "not a zero sum game" – but rather an industry that has allowed many businesses to be built on newly created platforms such as eBay that could not have been built before.

"One of the stories about Souq.com, which is not well told, is that Ronnie [Mouchawar] had 75,000 to 80,000 businesses who were never, never able to access interactive marketplaces until it existed.

"So Ronnie created many thousands of jobs and Souq.com suppliers built jobs but every business that was able to build a business on that platform grew because it was available," he says.

SOURCE: The National - Start-up generation rises in the UAE

Start-up generation rises in the UAE