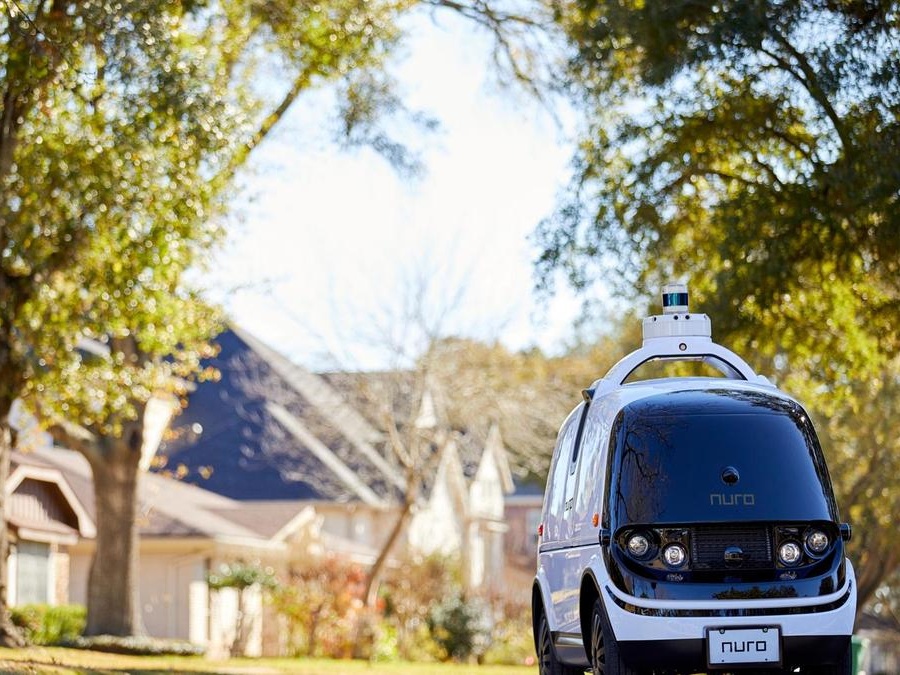 May Mobility’s boxy white-and-green self-driving shuttle pulls up to a damp corner in downtown Detroit. Its big doors swing out revealing a safety driver and six seats that face each other. It’s more comfortable than a subway car or most buses, but not by much.

The shuttle slips down a bus lane and stops at a corner to look for passengers. It’s a fixed route that covers a little less than a mile in Detroit, ferrying passengers from cheap parking near Greektown, a small entertainment district, to the crowded headquarters of Quicken Loans and other towers that employ some 18,000 people.

May’s shuttle tops out at 25 mph. The toaster-shaped cruiser isn’t sexy, and the ride is about as exhilarating as a merry-go-round at the county fair. But it’s bringing in revenue from the general public (It charges for services in Detroit but declines to say how much; it makes $800,000 a year in Providence, where it runs a similar service), which deep-pocketed giants such as General Motors’ Cruise and Argo AI, which is backed by Ford Motor and Volkswagen, have yet to do with autonomous vehicles. Alphabet’s Waymo, considered by many to be the technology leader, does charge riders but limits that group to 1,500 selected patrons. Although those well-funded players aim for superhuman levels of driving, startups like May are tailoring their ambitions to what autonomous technology can safely do today.

The difference between what May is doing vs. the moonshot being attempted by the better-funded carmakers underscores the real state of autonomous driving. As recently as a year ago, the popular imagination and investor dreams saw self-driving vehicles replacing Uber drivers and car ownership in the not-so-distant future. Then Cruise and Waymo both delayed true driverless services to the public, and the for autonomy were reset. “Everyone working on this realises it hit a wall,” said Sam Abuelsamid, principal with Navigant Research.

May has managed to get a public service going by keeping it simple. It provides slow rides on easy fixed routes that serve a specific need. “Our progress is that we’ve delivered 200,000 revenue-generating rides,” said May chief executive and founder Edwin Olson. “Some companies have the bankroll to be in R&D mode, but a few of us are working toward sustainable operations.”

For those companies trying to master self-driving software, the stakes are huge. Cruise, which has raised $6.15 billion from outside investors and gets $1bn a year from GM, may yet start running ride-hailing services this year but hasn’t committed to a date after missing its December target. Waymo, backed by Alphabet’s cash hoard, also delayed a shift to commercialising a purely driverless fleet, prompting Morgan Stanley to cut the estimated value of the unit from $175bn to $105bn in September.

Argo, Cruise, Waymo, and other companies are trying to master all driving scenarios and do it better than human beings can. It’s what Cruise chief executive Dan Ammann called “superhuman” levels of safety, at an event in January, when the company showed off its four-passenger Origin self-driving vehicle.

Waymo is starting to charge passengers fees. Riders of the company’s Waymo One programme must pay, even though they are selected from a group of volunteers who’ve signed up to test the service. Aptiv has developed self-driving cars and put them in Lyft’s fleet in Las Vegas. Waymo runs cars with Lyft, too. For now those cars always include a test driver for safety.

May has raised a comparatively tiny $84 million. Another startup called Voyage, which specialises in autonomous rides in retirement communities, has raised $52m; it plans to start charging a fee for its services soon, said chief executive Oliver Cameron, without giving a date.

With a much smaller purse, startups needs to bring in revenue faster, Mr Olson said. They can’t keep going back to investors for cash.

That’s why May has identified basic transportation needs that a slow-moving vehicle can handle. In Detroit the startup provides self-driving shuttles for Bedrock, the real estate company owned by billionaire Dan Gilbert, carrying people from its parking garage to offices almost one mile out along the loop that it runs. Bedrock pays May for the service.

May has 25 vehicles running in three cities. Mr Olson said that as he adds vehicles to the fleet in each market, bigger scale gets him closer to a profit.

In Providence, May started operating a ride-share shuttle service in May 2019, running from an Amtrak station about five miles to downtown, with 10 stops on the entire route. Mr Olson said May will pick up routes that are too small for public transit but still serve a need. The Rhode Island Department of Transportation pays the company annually for the service. Once corporate or government entities define the need, May ensures its vehicles can handle the route. It also knows what its operating costs will be in that market.

Voyage is making a similar play at the Villages, a retirement community with 125,000 residents about 45 miles from Orlando. The company has been running test vehicles using Chrysler Pacifica minivans that pick up elderly commuters traveling to different points in the village.

Mr Cameron said Voyage’s cars also top out at about 25 mph. Its service is door to door, so there is some variation in the route. Still, this is simple driving in low-traffic areas. The company is running test vehicles and refining its service in California and plans to introduce hundreds of vehicles at The Villages, a large retirement community in Sumter County, Florida.

Mr Cameron likens Voyage’s approach to the early days of Amazon. The online retail giant didn’t start off selling everything. It began with books, then moved to music before taking on the entire world of retailing. Tesla, too, started with a small two-seat roadster before it moved to larger, more passenger-friendly electric cars. “Amazon and books is a great example,” Mr Cameron said. “Let’s put one thing online, then figure out warehousing, logistics, and online payment, and then expand. We’re imitating Amazon books.”

Similarly, Olson said May is learning how to manage its business. Part of running a simple business model is that the cars are cheaper to build, so capital costs are lower. “I can put $500,000 worth of sensors on a vehicle, but that’s a research vehicle,” Mr Olson said. “It’s cheaper to operate at 25 mph instead of one that goes 60 mph.”

The companies developing AV software have faced two big challenges, Mr Abuelsamid said. One is how the computer brain perceives image data gathered by cameras, lidar, and different kinds of sensors to tell whether something is a pedestrian, a fixed object, or a plastic bag blowing in the wind. The other is predicting what those objects, especially pedestrians, will do in the next few seconds so the car can make a decision. When a car is moving more slowly on routes with fewer objects, it is much easier to run autonomous vehicles. That is what makes the advanced approach from the likes of Cruise and Waymo such a technological challenge, Mr Abuelsamid said.

May has an advantage with its approach, Olson said. Rather than identify and have programmers try to solve every rare and difficult driving scenario, called edge cases, May’s vehicles have their own simulator on board that can read an upcoming situation, such as a pedestrian in a crosswalk. The software then runs predictive solutions—should the car speed up before the pedestrian gets in the crosswalk or stop? The simulators are teaching the car how to manage edge cases.

Mr Olson is betting that May will be able to get a commercial advantage before his rivals get to market. He predicts he will close in on a profit in two years while most of his competitors won’t be commercialising for three to five years. “By then,” he said, “we will be a multi-billion company with years of experience with the technology and providing service.”

May will have to move fast. If the likes of Cruise, Argo or Waymo get paid services to the mass market faster than he thinks, their sheer financial muscle could create a business for autonomous technology that is controlled by a few players, almost like computing has just a handful of operating systems. Then there will be a shakeout.

“There will be a handful of companies that produce AV software,” Mr Abuelsamid said. “In the next few years, the number of companies developing the software will be culled down significantly.”