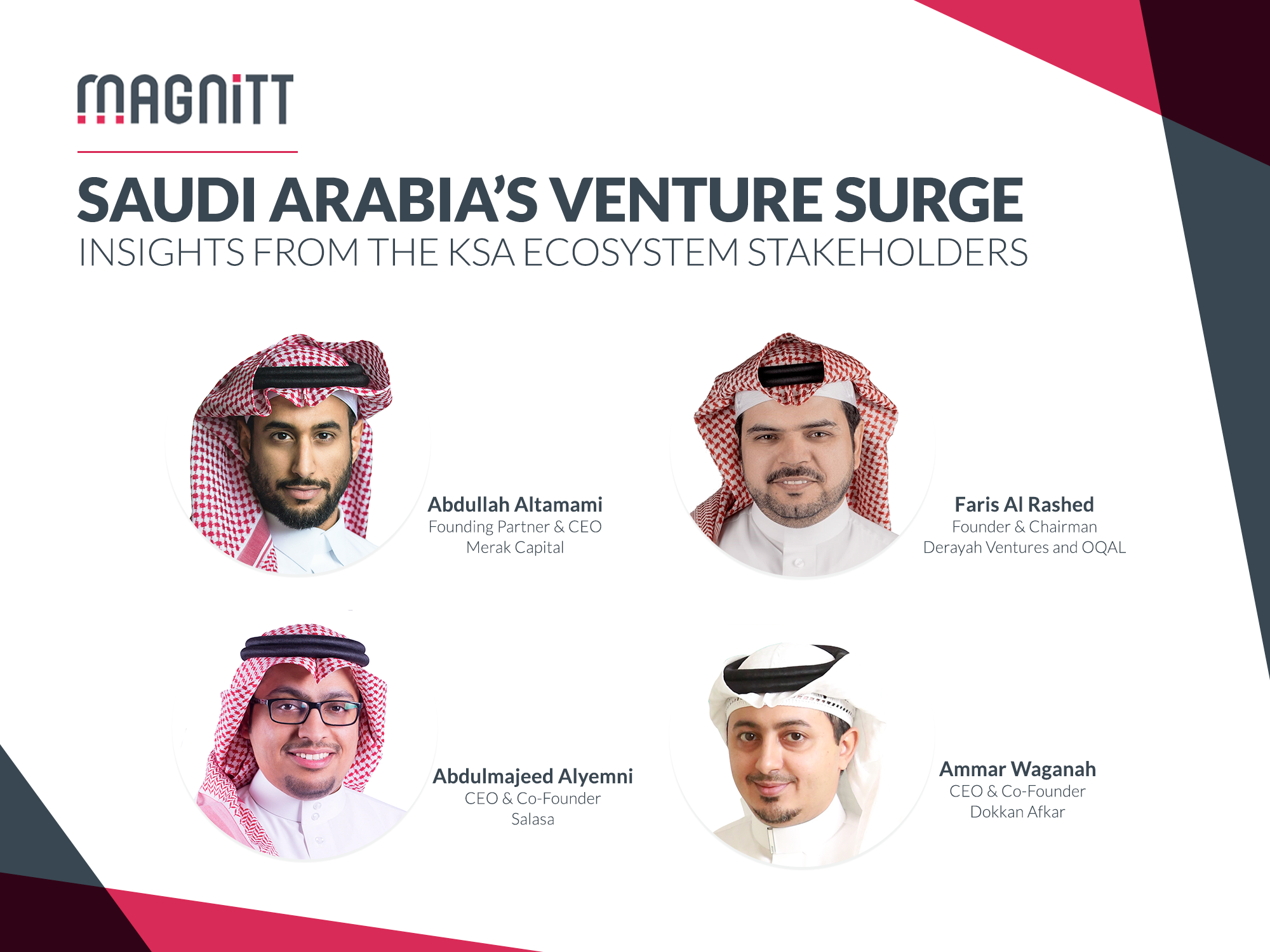 Tune in to our latest webinar with MAGNiTT's CEO and Founder, Philip Bahoshy, who hosted both investors and startups from the quickly growing Saudi startup ecosystem, to discuss the insights from the recently released H1 2020 Saudi Arabia Venture Capital Snapshot, in collaboration with SVC.

Check out the full discussion, and watch the Webinar below:

They explored several topics, including:

Abdullah believes (which has also been reflected throughout history), that whether there is venture backing or not, Saudi Arabia is usually treated as the main market for businesses (not just domestically). Many reasons are unlocking the potential. One is deregulation and the ease of doing business in the Kingdom. There are many initiatives e.g. SAGIA. Another catalyst is those such as SVC who are investing in VC funds or directly in co-investment programmes. This has provided encouragement to the ecosystem to push forward and invest. Therefore, it has increased the number of investors from Saudi.

Even if we go back to the Careem days, they were the last generation of startups, most of their major markets when looking at the numbers are Saudi markets. It’s a big global market, so a lot of people believe Saudi will become the leading pillar of an overall ecosystem.

If Saudi is sufficient or if you need to cross borders

Ammar says that he’s lucky to start out of Saudi when others are starting from other countries as it's giving his startup an advantage here, the market is big. He wants to build out a company from Saudi to the world and see more startups exporting products and exporting business outside of KSA. Saudi can be the centre, where you have your start, but you also need to go to the GCC and out of Saudi.

Abdullah adds, when it comes to growing in Saudi, you can't be satisfied just staying in Saudi, but it does have to be your anchor. If Saudi or UAE isn’t your anchor, it will be very hard for you to scale.

If the Careem unicorn created a ‘FOMO’ effect for venture investment

Faris states that having the first unicorn in the Middle East with Careem caused the ecosystem to be different than before. It wasn’t easy for Careem as entrepreneurs today have angel inestors, VCs, etc. When Careem started, there weren’t a lot of angels, or VCs, even in the late-stage, we had to go to corporate VCs, Faris says. Saudi Arabia is ready now. We have good angel investors who are willing to invest in early-stage.

1. Talent acquisition. There is a lack of talent. It can sometimes be risky to join a startup and there is competition on that talent. With the current circumstance, maybe this challenge will be easier as hiring will not be in the same rhythm as usual. This is a good chance for startups to acquire talent. Visas and regulations can also drive away people to join. Maybe within time, we are overcoming this challenge.

2. Change in regulation within the industry. You don’t know what will happen next.

3. Maturity of investors. We don’t have a mature ecosystem with a majority of angel investors who can really add value to the company. Early-stage can be risky for them. They need to understand how we can motivate the founders to drive their startup to the next level.

Ammar adds that the talent issue is one of the most important challenges that startups are facing, but they have to adapt. The team that you are building around your startup will pretty much decide how solid the startup and idea will be.

Advice on how to gain the best team

Abdullah mentions the MESA license, but also states that if there were a lot of talent, the price for them would be very cheap. For a CEO or a leader of a company, you have to make the talent feel like they need to join beside the monetary value, you need to give them ownership, give them culture. Employees have options. You have to have an open and attractive culture. Abdullah provides an example of when he offered someone more money and still struggled to acquire the individual, as they liked the culture where they worked. He states to take a risk and invest in employees.

Abdullah also highlights that a change of regulation is a challenge, but is also something we need. Philip adds that the Careem story showed that if you are close to the regulator, you can shake the regulations.

If the input of international players is healthy or something to be worried about? Should founders be more worried or welcome the competition?

When looking at the competition from abroad, if it's worrying or a good thing?

Ammar mentions that it excites them as we are seeing how international companies are playing in the Saudi role. It is healthy to see a standard being raised for Saudi startups. I’m sure there will be synergies between international and local and I’m hoping to see them very soon, he says. Eventually, they may want to partner with local startups and that is an opportunity, and when the two teams work together, the local startups will start learning and this is how the ecosystem will be advancing in the future.

Abdulmajeed comments that international players will raise the standard and competition in a good direction. This can help the ecosystem and open up new opportunities. This can also help solve talent issues by bringing more talent to Saudi too.

If we are going to see a valuation bubble in KSA, and if valuations are in favour or entrepreneurs or investors

Abdullah states that it is currently, favourable to entrepreneurs and that a bubble, may be coming. With regards to chasing a unicorn, this may be misleading, as we should be chasing returns. 100 million and 200 million is still a great win. Philip says all exits are a win.

Faris adds that in 2019, it was in favour of entrepreneurs, but we are seeing now in 2020 after COVID-19, some of them did not fundraise. He agrees that it is not about wanting to have a unicorn, but having 200 or 300 million is enough.

Abdulmajeed says that it is about supply and demand. There is a lot of cash in VCs and few startups. That’s what drives valuation higher. There will be more rounds in B and C, which will drive more cash.

Finally, Ammar highlights that we are all learning throughout the past few years and we are coming up with conclusions. The ecosystem is going to figure it out.

Other topics included safe notes and convertible notes, what needs to happen in Saudi to attract talent from abroad, if family offices who used to traditionally invest internationally in the venture space are now investing locally, and more.