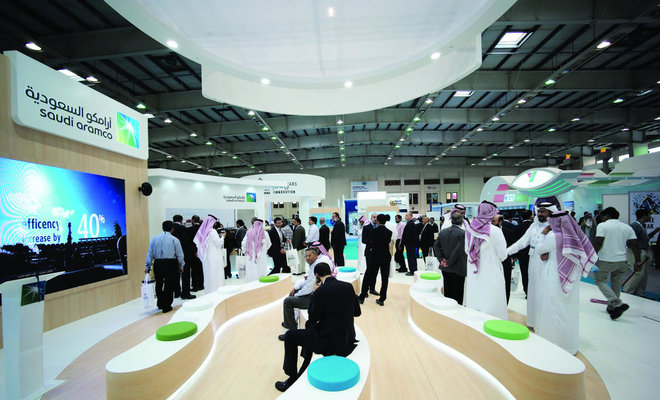 Visitors seen at the Saudi Aramco exhibition in Manama. The oil giant has become increasingly active in startup funding (Reuters)

LONDON: A maturing investment ecosystem is bolstering startups across the MENA region, according to a new report, with a notable increase in activity from Saudi investment institutions over the past year.

Since 2005, the top 200 funded startups in the MENA region have attracted more than $2 billion in capital, according to a report issued by MAGNiTT, which tracks the development of startups across the region. To date, the majority of top funded startups in the region were established in the UAE, and the primary financial backers have also tended to be UAE-based. But a recent uptick in funding from Saudi investment firms points to a developing ecosystem for startups in the Kingdom, according to MAGNiTT founder Philip Bahoshy. “The Crown Prince has made it part of his Vision 2030 to try to push for further entrepreneurship in the region. While previously it was just an idea, now it is becoming a strong reality,” Bahoshy told Arab News. As the Kingdom and governments across the Middle East diversify national portfolios away from natural resources and heavy industry, waves of startups providing everything from financial services to digital football fan clubs have burst onto the scene. Following a number of success stories — including the high-profile acquisition of UAE-based Souq by the American e-commerce giant Amazon — the investment culture supporting startups has developed apace. In August, Saudi Aramco Ventures, a unit of the Kingdom’s national oil company, invested more than $20 million in the payments startup PayTabs. The momentum continued this fall when the Saudi-based restaurant management startup Foodics raised $4 million, with inputs from local funds Raed Ventures and Riyad Taqnia Fund (RTF). The movement in Saudi Arabia follows a broader regional trend, Bahoshy said, where investors are beginning to see meaningful returns on startups established between 2012 and 2015. Investors across the region have shown a preference for early-stage funding, according to the report, pouring more than $400 million into Series A funding rounds since 2005. Still, increasing investment at the earliest stages of the startup cycle remains a challenge. On average, regional startups require over three years to close Series A funding but raise just $1.5 million in the Seed and pre-Seed stages. Citing the lack of a transparent angel investing community in the region, Bahoshy said that governments and international financial institutions such as the World Bank should help incubate startups in their nascent stages and support local entrepreneurs. “As more startups enter the ecosystem, you need to continue to fuel the base of that pyramid so (the companies) continue to grow,” Bahoshy explained. According to the report, Middle East Venture Partners, 500 Startups and Wamda Capital are the most active investors in the region, contributing significant capital to the sector. E-commerce startups have attracted the most funding to date, generating some $700 million since 2005. But of late, investors have shown a preference for startups providing financial technology products, like remittance payments and peer-to-peer lending. Bahoshy said that startups providing solutions for broader regional challenges such as sticky logistics and cross-border banking frictions stand the best chance of attracting meaningful investment. More than half of the top-funded startups in the MENA region were founded in the past five years, suggesting a momentum around financing entrepreneurship that has not seen previously been seen. Broadly speaking, Bahoshy said the outlook for startup funding across the region was one of cautious optimism. “The general trend is positive. We’re beginning to see new entrances into the space (including) Saudi venture capitalists and international investors,” he said.