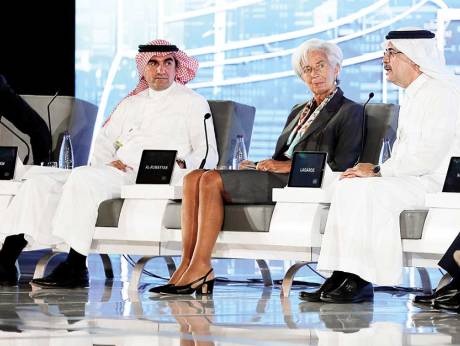 Riyadh: Saudi Arabia on Tuesday opened a major investment conference aimed at shining a spotlight on the country’s efforts to overhaul its economy and society after being jolted into action following a plunge in oil prices that threatened the kingdom’s main source of revenue and its long-term stability.

The conference, dubbed the Future Investment Initiative, is being hosted by Saudi Arabia’s sovereign wealth fund. The event is being attended by giants in the business world and top Saudi officials.

At the heart of the conference are Saudi reform efforts to transform its sovereign wealth fund into the world’s largest. The kingdom hopes to do this by listing less than 5 per cent of state-owned oil firm Aramco on the Saudi stock exchange and an international exchange, then transferring control of those funds to its Public Investment Fund, also known as PIF.

Saudi Arabia says that that through the sale of Aramco shares the PIF could one day control $2 trillion (Dh7.34 trillion) — double that of Norway’s, which at more than $1 trillion is the currently the world’s largest sovereign wealth fund. It’s unclear how much PIF currently controls.

Recently, reports emerged that Saudi Arabia was considering holding off on the international portion of the IPO in favour of a private offering from a key investor like China. Saudi officials, however, insist Aramco is on track for listings as early as next year.

PIF managing director Yasir al-Rumayyan, who is also on the board of Aramco, addressed those concerns at the forum in Riyadh on Tuesday.

“Everything in on track, 2018 is our target. There is nothing that I know about which can take us off track,” he said.

It’s also joined forces with Japan’s Softbank and other leading technology and investment funds to create a massive fund to invest in technologies like artificial intelligence.