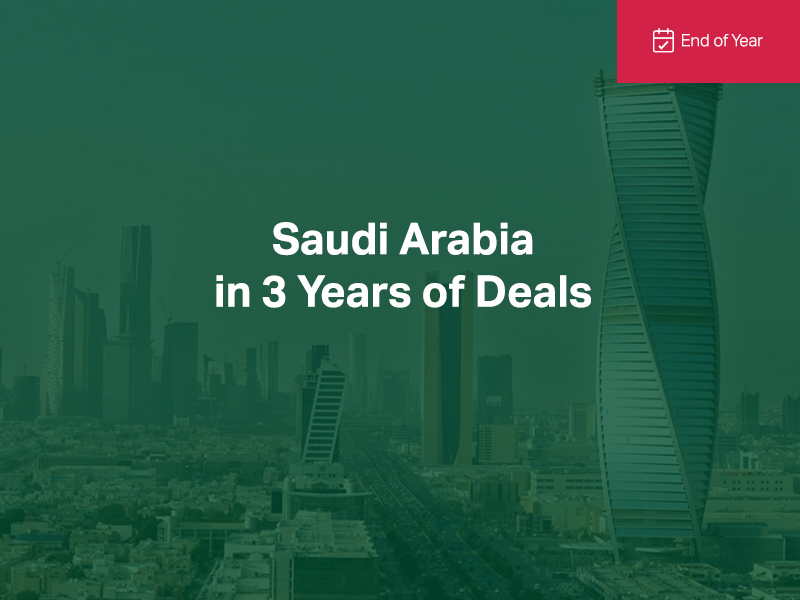 Back in 2018, the enterprise software sector was the leading industry in KSA fueled by a $21M Series A round closed by cloud communications solutions provider Unifonic. While the E-commerce sector was the 5th most funded industry in a rather nascent Saudi VC ecosystem back then, industries of digitization like FinTech, T&L, and even Food & Beverage were still receiving conservative investor interest. Amongst the top funding rounds closed in Saudi Arabia in 2018 following Unifonic were industry-sporadic rounds including a $2M Series A round by online car marketplace Syarah and a $9M Series A raised by entertainment network Telfaz11. Fast forward 3 years and Unifonic closes Saudi’s first-ever megadeal in 2021, while Syarah raises $20M in their Series B fundraise, and Telfaz11 announces its acquisition of film production studio Last Scene Films in their pursuit of producing pictures for global giant Netflix.

In 2021, as Saudi Arabia records more than 300% YoY growth in funding to record a new all-time high, E-commerce, FinTech, and F&B sectors have raised more than half of the capital deployed across the kingdom. While 3 years seem like a relatively short time span, the KSA public, private, and VC ecosystems were keen on developing the innovation and Technology groundwork of the kingdom with a vision of diversifying their economy. Next week, as we release our 2021 Saudi Arabia Venture Investment Report brought to you by Saudi Venture Capital Company(SVC), we’ll be listing the major strides achieved by the VC ecosystem in Saudi. Today, we highlight the drivers of innovation and VC success over the past 3 years:

At the end of 2021, Saudi’s Public Investment Funds announced its plans to invest $40Bn locally which will be funneled in supporting the Kingdom’s innovation sectors. A look at the investments of PIF-backed Sanabil Investments over the last year, we find key investments in Tech pioneers across industries including F&B platform aggregator Foodics and B2B E-commerce platform Sary which raised an unprecedented $75M in their Series C round. In 2019, The Saudi Arabian Monetary Authority (SAMA) introduced its regulatory sandbox focused on FinTech innovations in open banking, financing, and payment infrastructure. Within its existing cohort of more than 20 innovative startups, were major emerging players like crowdfunding debt platform Lendo, offline and online payment solutions provider Tabby, and Buy Now Pay Later solutions pioneer Tamara- all of which raised stellar rounds in 2021. These nationwide efforts along with the consistent participation of Saudi-backed VCs including Oqal Angel Investors, Impact 46, Wa’ed, and Vision Ventures have resulted in the exceptional growth of digital innovations over the years.

As a result, we have been observing funding growth in E-commerce and FinTech over the years, the latter still being a ripe and unsaturated market in the kingdom. We reflect on 3 timestamps in the funding evolution of the FinTech sector in Saudi Arabia, where in 2017 Saudi Arabia makes its first $20M with payment solutions provider PayTabs raising the only FinTech round for the year. In 2019, even though the KSA-based FinTech sector raised almost $5M less than the previous record set in 2017, the funding was dispersed over 7 transactions a new deal record with startups like Payment Service Provider HyperPay and investment marketplace MANAFA Capital raising the two highest rounds. 2021, however, marked a completely new milestone for the sector raising almost 13x in the capital than the year before.

The success of FinTech and the leading reign of E-commerce startups are only two of the many unprecedented features in Saudi’s funding evolution in 2021. Catch our 2021 Saudi Arabia Venture Investment Report by Saudi Venture Capital Company(SVC) to really grasp KSA’s journey in becoming a competitive Tech hub in MENA.