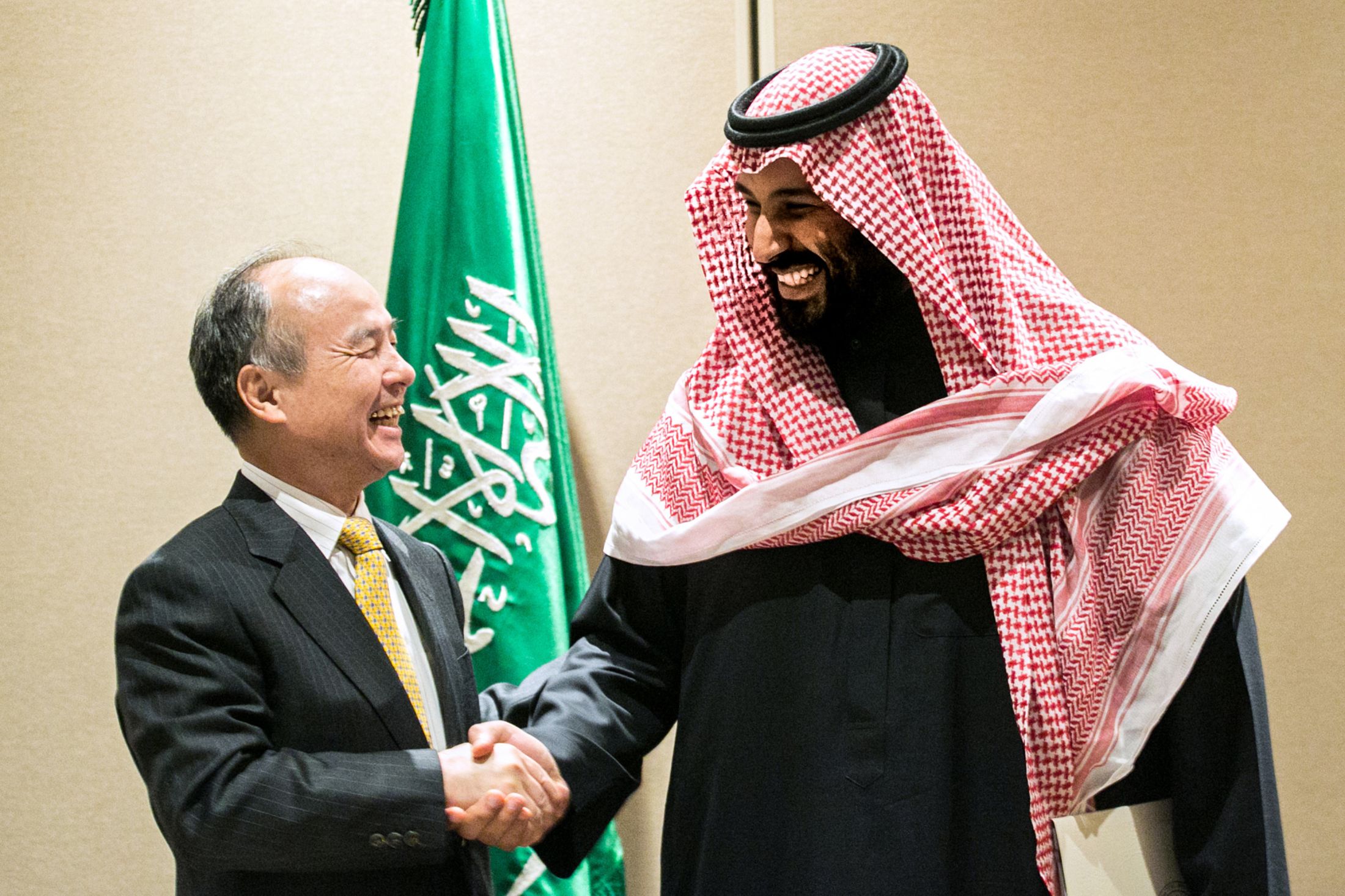 Saudi Arabia Doubles Down on SoftBank Bet With Extra $45 Billion

Saudi Arabia is preparing to double-down on its bet that Masayoshi Son can pick the technology giants of the future. The country’s sovereign fund will make another $45 billion investment in Son’s second massive Vision Fund.

The Public Investment Fund, or PIF, is set to make the investment as it looks for ways to deploy a $170 billion windfall it’s expecting over the next three-to-four years. That money would come from the sale of a stake in Saudi Basic Industries Corp. and the initial public offering of state oil company Saudi Aramco, according to PIF Chairman Mohammed Bin Salman -- who is also Saudi Arabia’s Crown Prince.

The PIF wants to be a key investor in the second $100 billion investment fund that SoftBank Group Corp. Chief Executive Officer Son plans to raise, Prince Mohammed said in an interview with Bloomberg. That would bring the PIF’s contribution to the two funds to $90 billion, he said.

“We have a huge benefit from the first one,” he said. “We would not put, as PIF, another $45 billion if we didn’t see huge income in the first year with the first $45 billion.”

Since unveiling a strategy in 2016 to transform the PIF from a sleepy domestic holding company into the world’s largest sovereign fund, it has made a series of bold investments. Many have focused on technology companies yet to make a profit. In addition to its commitment to the first Vision Fund, the PIF made a $3.5 billion investment in Uber Technologies Inc., built up an almost 5 percent stake in Tesla Inc. and then put $1 billion into its rival, Lucid Inc. The PIF also agreed to put $20 billion into a U.S. infrastructure fund run by Blackstone Group LP.

Speaking at an event in Riyadh last year, Son said that investments made by the first Vision Fund were already paying off. The fund had made a return of over 20 percent in its first five months, he said.

That fund, which also raised money from one of Abu Dhabi’s sovereign funds and Apple Inc., is about four times the size of the largest venture capital fund ever created and bigger than any private equity fund in history. Son told Bloomberg Businessweek in September that he plans to raise a new $100 billion fund every two or three years, and will spend around $50 billion annually.

In less than a year since the fund first began making investments, it has already committed $65 billion to acquire big stakes in Uber, WeWork Cos., Slack Technologies Inc. and GM Cruise LLC.

Making another significant investment in SoftBank’s next Vision Fund would help the PIF boost its assets, which have already risen to more than $300 billion, Prince Mohammed said. Currently the fund’s biggest assets are mostly local equities, including the stake in Sabic and holdings in Saudi Telecom Co. and National Commercial Bank.

That’s even higher than the target the PIF announced last year, when it said it wanted to grow its assets to $400 billion by 2020. At the end of 2015, the fund had $152 billion of assets, according to a document published last October outlining its 2020 plan. That document also said the PIF aimed to generate annualized nominal returns of 4 percent to 5 percent in the years to 2020, up from 3 percent in 2014 to 2016.

The PIF raised $11 billion in its first ever borrowing earlier this year as it looks to use leverage to boost its returns. The fund is also set to receive around $70 billion to $80 billion from the sale of its 70 percent stake in Saudi Basic Industries Corp. to Saudi Aramco in 2019, Prince Mohammed said. That would then be followed by proceeds from the initial public offering of Aramco, which could raise another $100 billion, he said.

Saudi Arabia Doubles Down on SoftBank Bet With Extra $45 Billion