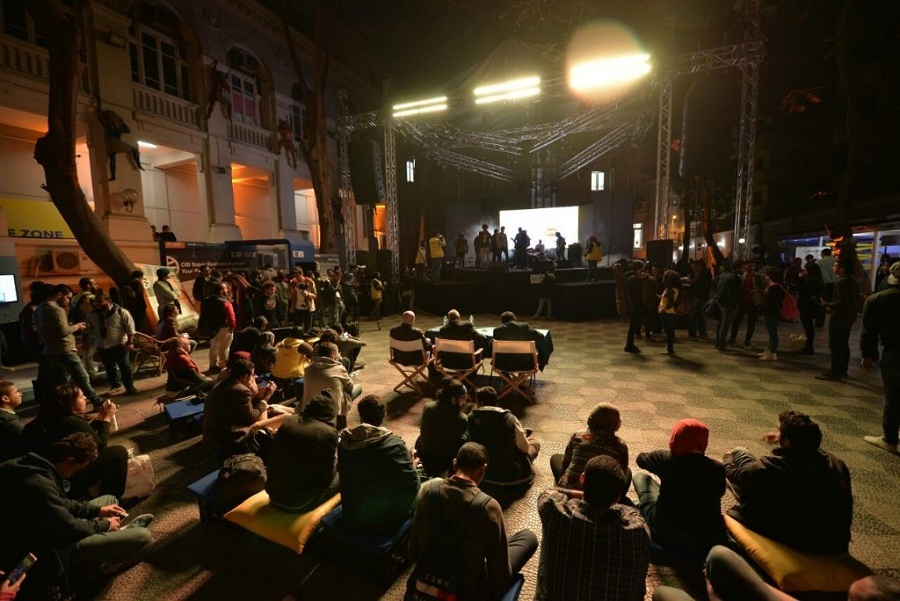 Rising Up: Egypt's entrepreneurs as important as ever

The Rise Up Summit, the region’s foremost entrepreneur get-together, closed yesterday on the news of yet another brutal terrorist attack in the city.

Twenty-five Coptic christians died after a bomb exploded during the Sunday service at St. Mark’s Cathedral in the suburb of Abbasiya, a 15 minute drive from the downtown complex where the entrepreneur festival was held.

While Egypt’s entrepreneur ecosystem is occasionally accused of being a bubble which has little or no impact on the wider country, at times like this events such as Rise Up are a hopeful counterpoint to ongoing sectarianism, economic pain, and fear.

Rise Up cofounder Abdelhameed Sharara told Wamda it was events like his that could prevent such attacks in future. “Startups create solutions and jobs and that’s a big means for fighting terrorism.”

The three-day festival gathered in the almost-idyllic grounds of the downtown American University in Cairo campus and the Greek Campus business park, surrounded for the duration by a heavy police presence.

There were marching bands, chill-out beanbag zones, a startup trade fair, an Apple-esque product launch and what was possibly the biggest demo day an Egypt accelerator has ever put on. Local entrepreneurs were thirsty for knowledge, crowding workshops and bringing a deep level of engagement with mentors, and each other, to Wamda’s mini Mix N’ Mentor on Sunday.

There were a couple of missteps. Organizers were not able to combat the wifi problems that plague local tech conferences across the region; and panels looking at how the media could support startups, and at women entrepreneurs, riled some attendees who said the former fundamentally misunderstood the media’s role and the latter was irrelevant.

Jaleesa cofounder Stephanie d’Arc Taylor, who was on the Regional Strategies for Women Entrepreneurs’ Success panel, said conferences like Rise Up needed to make an effort to have women on every panel, instead of having a panel for women.

The women attending Rise Up didn’t need pandering to: pitch coach Bianca Praetorius said she wanted to bring a team of Egyptian women to the major Berlin Tech Open Air next year to teach her compatriots a thing or two about grit.

This year Rise Up focused on four themes: cleantech, creative industries, fintech and technology more generally.This allowed talks to dive deeper into key issues. For example, a Lab to Market panel focused on the details of partnering with researchers - how to manage the relationship, the legal restrictions on government-funded research, and managing intellectual property fairly.

Regional events are moving towards greater support of the creative arts, and Rise Up included talks on film as a business and a ‘startup band’ competition where entrants - who’d auditioned first - had 72 hours to build a band and a business plan.

The fintech track was topped by the 1864 Fintech Accelerator demo day, an extravagant event on Saturday evening.

One company in particular caught people’s attention: Card Switch puts fraud management into the consumer’s hands by allowing card and account owners to switch them on and off, so, for example, parents can give their children an emergency credit card and only turn it on in cases of real emergencies.

Cairo may finally also have a rival in the region’s most populous country.

Alexandria burst onto Egypt’s startup scene with the Techne Summit earlier this year, but this weekend founder Tarek El Kady launched the Alexandria Angels. The network is made up of local ex-entrepreneurs and is being assisted by the Cairo Angels (although is not officially affiliated with the older angel network), and intends to start making investments in the third quarter of 2017.

They are the first angel network in Alexandria. “Investment is not the only element,” said El Kady. “Alex Angels will help brilliant young minds with the capital they need… as well as the mentoring needed to succeed.”

Already this year Sarah Aziz and Morad Edwar have launched Alex Geeks, an educational, inspirational group to create something for local entrepreneurs to coalesce around.

Rise Up this year also began a long-held plan to reach out to Sub-Saharan Africa. In 2014 Sharara told Wamda they were thinking of taking the show to Europe and deeper south into Africa.

David van Dijk from the Africa Business Angels Network (ABAN) was scouting for talent, and mobile money firm M-Kopa and Kenyan solar pumping company Future Pumps were both looking for partners and opportunities.

Egypt is yet to produce a breakthrough startup from the post-2011 era, to follow in the footsteps of the likes of Sysdsoft, Fawry and Si-Ware, but Egyptian startups are looking cheap compared to regional rivals after the devaluation of the pound.

Several entrepreneurs, who wished to remain anonymous for the time being, told Wamda they had secured large rounds or were in the process of securing large rounds from offshore investors offering dollars, rather than Egyptian pounds.

The hype around Rise Up and the possibilities it encapsulates will be carried through the next year by the deals made, the success of new incubators and investors, and the progress of the startups which launched or pivoted during the event.

And Egypt needs the boost. As the country writhes under the pain of rapid currency devaluation and continual violent attacks on its people, the continued enthusiasm of those in and around the startup sector are a beacon of hope now, rather than the promise of a distant future.

Rising Up: Egypt's entrepreneurs as important as ever