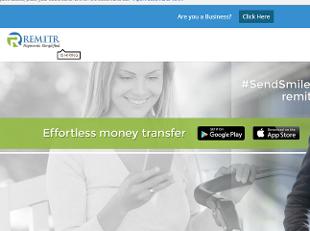 Remitr gets $1m in funding

Remitware Payments Global FZ LLC, the Dubai-based fintech startup has announced completion of its first fund raise with a US$ 1mn seed round. The investor pool is an amazing mix of startup founders and angel investors from across the Globe. Earlier this year, Remitware launched its global payments platform “Remitr” in UAE. Remitr enables local Exchange Houses to leverage its seamless end-to-end money transfer platform to provide mobile based money transfers to individuals.

Remitr was founded in 2015 with the vision to develop a mobile platform for masses to make payments globally. The number of processing layers involved in cross-border payments, each adding their own costs, coupled with exhaustive compliance requirements make them expensive and complex. Remitr connects all the dots by ensuring delightful customer experience, adherence to regulatory guidelines, mobile convenience with bank grade security on its global money transfer platform. Remitr prides itself in bringing in speed, transparency, simplicity and cost savings for the customer.

“Remitr is designed to work with licensed exchange houses in the UAE. We aim to revolutionize the way people make payments and send money back home using their mobile phones, without any of the hassles of standing in queues or dealing with cash. The seed investment would help us invest further in product development for global markets, as well as in marketing Remitr platform in GCC and rest of the world. We are already on course to launch in Canada by the end of 2016”, says Kanchan Kumar, CEO and Co-founder of Remitr.

Remitr plans to leverage its data driven technology to derive deep insights into consumer behavior and leverage these insights to provide unparalleled customer experience. These insights ultimately benefit the customers by providing them exactly what they need, at a time and place most convenient to them.

Remitr was founded by Kanchan Kumar, Altaf Ahmed, Sandeep Jhingran and Sandeep Todi with a vision to re-imagine and simplify the complexities in global payments. The Startup was set up at in5, the technology innovation hub hosted and managed by Dubai Internet City. Each of the founders brings in 20 plus years of professional experience in Banking, Technology and Digital media to build a world class payments product.

Since joining the in5 Incubation Center in 2015, Remitr has been active in the local community, receiving crucial infrastructure and mentoring support from the in5 Board. “in5 has been actively encouraging and connecting Remitr with entrepreneurs and investors to help us continue to evolve the business model into this next phase,” says Kanchan.

The four founders are bullish on the achievements in less than 6 months of being operational, and are now looking at using the team’s inherent strength to expand to newer geographies.

"The UAE has a vibrant entrepreneurial landscape and at DIC we endeavor to support innovation and creativity. Just like Remitr we foster many startups by offering opportunities for ideas to grow and connect at in5 Centre and we are happy to be a part of their success", said Ammar Malik, Executive Director, Dubai Internet City and Dubai Outsource City.

Remitr chose to work with investors who have a deep understanding of the global payments landscape as well as experience of building large businesses. The seed round investors include Dubai’s Smart Start Fund led by Prashat (PK) Gulati & Amit Singhal, Vijay Shekhar Sharma the founder of Paytm, Singapore Angel Network, Kunal Shah, co-founder of FreeCharge, Vishal Gondal founder of Goqii, Nasr-eddine Benaissa, Pravin Gandhi and several other technology angel investors based in the UAE, US, UK and India.

Vijay Shekhar Sharma, Founder & CEO - Paytm said, "Seamless cross-border payments infrastructure can accelerate global commerce and development. The founding team at Remitr are solving a real world problem and has the passion, belief and conviction to accelerate this revolution. I am confident they will truly disrupt this space."

“Our investment in Remitr reflects our belief that efficient financial services are an essential part of global growth and the UAE is a leader in such innovation. The deep experience of the Remitr team underpins our faith in their capability to execute that vision.” said Prashant (PK) Gulati, Founder and Managing Partner of Smart Start Fund.

In October, Remitr was chosen by Forbes Middle East as one of the Most Promising UAE Startups for 2016.

Remitr is available for Android as well as Apple phones. Remitr facilitates UAE residents to securely send money to various countries at best possible rates offered by its partner exchange houses. Remitware is now working towards scaling the operations in UAE as well as expanding in other GCC countries in coming months.

Remitr gets $1m in funding