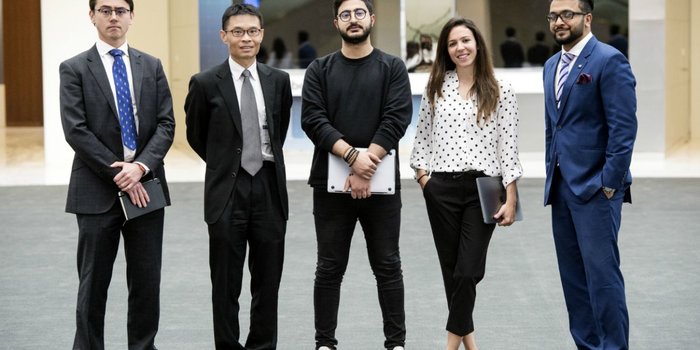 For those of us who have been watching the Middle East entrepreneurial ecosystem for a while now, it wouldn’t be a stretch to say that the region has seen a surge in the number of accelerators and incubators in the recent past. These have included homegrown concepts like Bahrain’s FinTech Bay, Kuwait’s Savour Ventures, and the UAE’s Fikra Labs, to name a few, but there’s also been an interest showcased in the region from international players in this space, such as 1776, 500 Startups, and Techstars. And now, there’s new kids on the block to add to this latter group of entities: Silicon Valley-headquartered Plug and Play has partnered with the Abu Dhabi Global Market (ADGM) in the UAE to set up its own signature fintech innovation program, which is set to go live in the third quarter of 2018.

At this moment, at least some of you may be wondering: what is Plug and Play anyway? Well, here’s Plug and Play EMEA Managing Partner Omeed Mehrinfar with the answer to that. “Plug and Play is many things,” he says. “We’re the most active venture capital in the world. We’re the largest startup accelerator in the world. And we’re the largest corporate innovation platform in the world.” Sure, there are a lot of superlatives in that responsebut Operations/Communications Director Ashlene Ramadan has the figures to back those statements up. “To add on to Omeed’s points; when some people ask us why we are defined as the biggest in the game, there are a few points,” she explains.

“Firstly, the order of magnitude of startups we source and accelerate globally every year. Just last year alone, we’ve accelerated 426 startups across 14 different industry verticals. This was a 33% growth from our 2016 numbers, because of the new sectors, corporate partners, and locations we’ve been adding to our operational roster. Secondly, as a venture capital, we’re also the most active in the world for the past three years in a row. In 2017, we invested in a total of 262 investments internationally across our 28 different offices within that single year. As for being the largest corporate innovation platform in the world, from having serviced around 40-50 Fortune 500s about four years ago, today that number is just under 300 corporate partners, with a goal of reaching 400 by end of this year.”

Plug and Play with the Abu Dhabi Global Market team

Plug and Play’s growth into what it is today was led by its founder and CEO Saeed Amidi, who, interestingly enough, once owned a Persian rugs store in Palo Alto, California. His customers included some of the most influential people in the tech world, and that was how Amidi got interested in the venture capital space. He was soon funding startups in Silicon Valley- one of the companies he backed was PayPal. “Through his newly found passion in the tech scene, Saeed founded Plug and Play in early 2006,” Mehrinfar explains. “Saeed created Plug and Play in the Silicon Valley initially as a massive co-working space, whereby startups would rent offices, and our founder would then keep close tabs on startups he saw potential in, and leverage his extensive network of venture capitalists and corporate executives to scale their businesses even further, while strategically deploying angel investor capital into them. This was the original thesis that led us to be a first-mover in the corporate innovation scene back in the day.”

And this corporate innovation platform remains one of the key features that sets Plug and Play apart from the others in this field. “With regards to our operations, Plug and Play has two primary constituents that we prioritize in our innovation platform; the startups and the corporates,” Mehrinfar notes. “On the startup’s side, our primary service is to scale their businesses leveraging our massive corporate network through our structured accelerator programs we run internationally. We operate across 14 different industry verticals, a few of which are fintech, retail, automotive and health 2.0, and in each vertical, we work with corporate partners who are industry leaders in their respective field. The startups work alongside corporations, such as Mercedes Benz, BNP Paribas, Deutsche Bank, and Carrefour, to land piloting or commercial opportunities."

"On the corporate side, we’re an augmented resource to work alongside their existing innovation KPIs, and to leverage our accelerator programs for three primary value offerings: one, business development/licensing opportunities with our global network of top-tier startups and entrepreneurs; two, investment opportunities, as many corporates and government agencies are beginning to structure venture arms, or invest more proactively off their balance sheets into startups and technology, and three, acquisition opportunities; although this is the least common, we still see this time-to-time. A recent example includes one of our portfolio companies, Tenor, that just announced their acquisition by Google 2-3 weeks ago; so, we’re constantly striving for allowing our startups reach a successful end game, whether it be a merger, acquisition, or IPO!”