The Most Notable Startup Exits in H1 2018 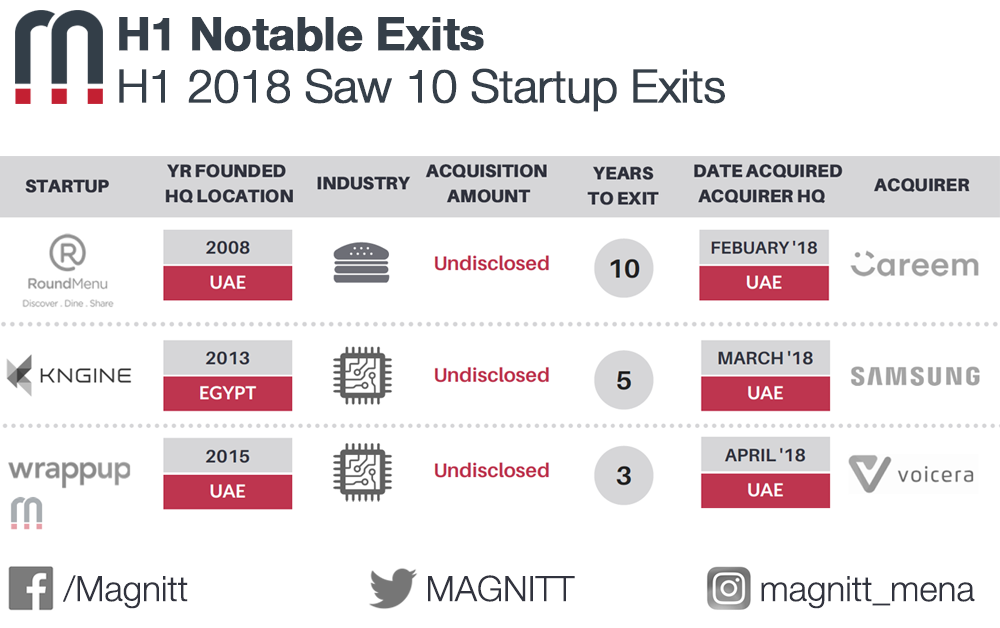 The dream of some startup founders can often be summarized into one word - “exits”. As competition continues to grow within the startup ecosystem in the Middle East and North Africa, many companies look to acquire startups that would add value to their own, be it to enhance their product or simply to eliminate the competition.

During the first 6 months of 2018, 10 startups in the Middle East and North Africa reached an exit deal, all of which were undisclosed in terms of funding amount. Some of the top acquirers include Dubbizle and Gulf Capital, both of which made 2 deals each in the first half of 2018.

We highlight some of the most notable exits that took place in the first half of 2018.

From boosting employment across MENA to testing bus services in the region, the Dubai-based ride-sharing app, Careem, made various headlines in the first half of 2018. The unicorn startup also showed interest in launching a food delivery service and news quickly surfaced that the app was set to spend up to $150 million in the business to compete with other food delivery services that operate in the region such as UberEats, Deliveroo, Zomato and Talabat.

As Careem looks to develop its own food delivery platform, it has emerged as an acquirer to smaller startups in the industry. In the first half of 2018, Careem acquired restaurant discovery platform, Roundmenu. Since its founding, Roundmenu has raised has raised $3.1 million in funding from Middle East Venture Partners (MEVP), HoneyBee Tech Ventures, BECO Capital and Horeca Trade. The startup has also established a presence in 9 countries including large markets such as Egypt, UAE and Saudi Arabia.

Although the financial details of the deal remain undisclosed, it’s circulation and significance to the startup ecosystem in the region has positioned the acquisition of Roundmenu by Careem as one of the most notable deals in the first half of 2018.

As smartphone manufacturers continuously work to develop their features, Samsung acquired Egyptian Artificial Intelligence Startup, Kngine, to bolster the functionality of Bixby, Samsung’s virtual assistant. The telephone manufacturer acquired the Egypt-based startup that is responsible for developing artificial intelligent search engine, capable of understanding and answering questions. As Samsung acquired 100 percent shares in the AI startup, they will also be able to use various functions of Kngine such as automating customer service, powering voice interfaces and driving enterprise search.

Since its launch in 2013, the Egyptian artificial intelligence startup raised its first investment from Sawari Ventures. Other investors include Vodafone Ventures and Samsung NEXT. Collectively, Kngine has raised a total disclosed funding of $775K since its founding.

However, Kngine was not the only AI startup to make the most notable exits ranking in the first half of 2018. Wrappup, a Dubai-based note-taking app that functions using AI technology was acquired by US-based Voicera, which offers an in-meeting assistant that listens, takes notes and identifies action items.

As Voicera looks to better serve users’ needs during meetings that don’t include conference calls, the acquisition of Wrappup was a natural extension to the platform as Wrappup’s iOS and Android apps leverage AI technology that is able to record all details during meetings and then summarize them.

For an exclusive interview with Wrappup Founders who share Insights on their recent Acquisition by AI pioneer Voicera click HERE.