A first glance the Middle East is in the middle of a start-up boom.

Investment is soaring, but much of it is focused on just two companies - and one country. There’s work to be done to catch up with the global leaders, but the good news is, there’s plenty of potential for expansion.

Annual investment in start-ups in the Middle East and North Africa (MENA) region is fast approaching $1 billion, according to research by Magnitt. The research excludes Israel, which has a well-established start-up scene.

Last year the amount of cash pumped into tech firms more than quadrupled, reaching $870 million. However, the vast majority of this – $625 million – flowed into just two firms: online retailer Souq; and Careem, the Dubai-based rival to Uber which operates in 53 cities across MENA and South Asia.

Amazon’s acquisition of Souq.com, reported to be in the region of $650-$750 million, put the region's start-up scene on the global map this year.

Souq is arguably MENA’s top online retailer, and competes with Amazon in several key markets in the region.

Most of the investment in MENA start-ups is concentrated in just one country. According to Magnitt, the United Arab Emirates (UAE) has secured half of all tech funding in the region over the past three years.

Given that UAE is ranked the easiest country in the region in which to run a new business, it is perhaps unsurprising that it attracts the most funds.

According to World Bank data compiled by The Economist, high levels of bureaucracy combined with lack of government support in many MENA countries create an environment more hostile to start-ups than in many other parts of the world.

However, there are signs that governments are altering their approach in a bid to be more globally competitive. For example, earlier this year Egypt introduced a new bankruptcy bill that abolishes imprisonment for company founders whose businesses fail 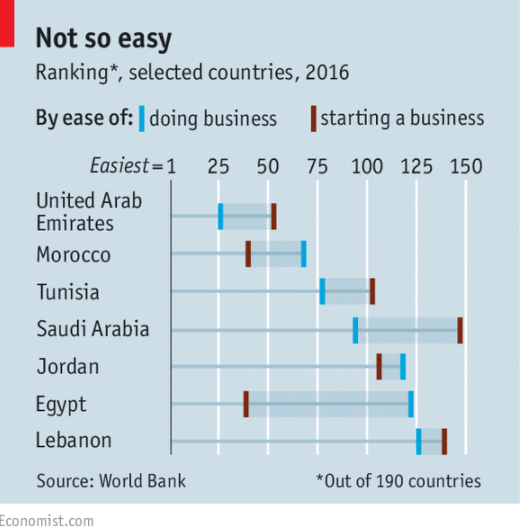 Middle Eastern cities have a long way to go before they can compete with leading global start-up hubs.

Not a single Arab nation featured in The Global Startup Genome Ecosystem Report 2017, a survey which ranks global cities according to their ability to create environments in which start-ups thrive.

The good news is there is plenty of room for growth: just 8% of businesses in MENA have a digital presence (in the US it is 80%), and only 1.5% of MENA’s retail sales are online. The digital market is estimated to add $95 billion in annual GDP by 2020.