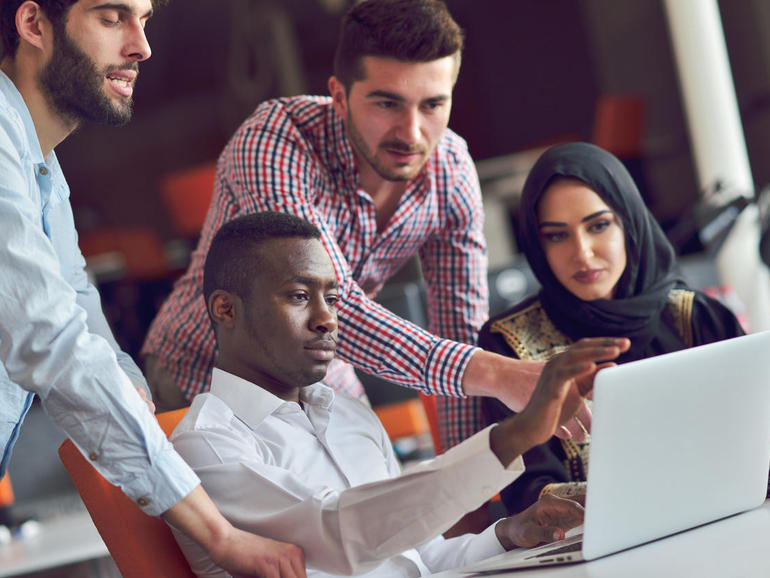 Middle East tech: Nine things the region must do to safeguard its financial future

As AI and automation arrive, countries across the large and diverse Middle East and North Africa region have some major structural issues to tackle.

The outlook for growth in the Middle East, North Africa region is expected to improve slightly in 2019 and 2020, the World Bank reported last June, noting a range of factors including "a favorable global environment, post-conflict reconstruction efforts, and from oil importers' reforms to boost domestic demand and increase foreign investment".

Although welcome, these conclusions do not mask the longer-term economic realities that the region needs to address. The fourth industrial revolution driven primarily by AI and automation is going to radically change how we work, rest and play, bringing about major shifts to societies and economies.

States such as Saudi Arabia, Qatar, UAE, and Oman have acknowledged this upheaval, with bold policy documents identifying a new vision for their counties. But the transition to these new digital realities will inevitably be haphazard and uncertain.

To ensure their economies remain competitive and on track as the next wave of technology arrives, nations across this large and diverse region must tackle several key structural issues. Here are some of the biggest considerations.

"With the exception of the capital-surplus oil-exporting countries, Arab economies have not experienced rapid, sustained expansion," noted 2015's UNESCO Science Report, 'Toward 2030'. "Events that have erupted since 2011, the so-called Arab Spring, were as much a reaction to economic frustration as poor public governance," they wrote.

Arguably, little has changed since. Addressing this issue will require changes of approach including:

1. Thinking beyond oil. The region is home to major oil exporters and importers, which are vulnerable to the volatility of this sector. Rising consumer prices, notably in the Levant and North Africa, is leading to a rethink of policies such as electricity subsidies in Egypt.

Meanwhile, 'oil shock' is helping to drive economic diversification in the Gulf nations, as well as investment in renewables in countries such as Morocco, which is soon to be home to the world's largest concentrated solar power farm, and Tunisia, and Algeria.

2. Reducing reliance on the state. Economies in the region have often deployed a top-down approach that has historically stifled private-sector investment. This situation is beginning to change, but more needs to be done.

As the World Economic Forum observed in their Arab World Competitiveness Report 2018: "States remain present as active market participants in a number of sectors, including construction, finance, transport, manufacturing, and infrastructure."

Creating a more dynamic private sector matters, given existing unemployment levels and predictions "that the working-age population will grow by about 50 per cent by 2040 – from about 241 million in 2015 to 370 million by 2040".

3. Creating more opportunities for women. Compared with many other regions, the Arab states are closer to gender parity in fields such as science and research. Women in the Middle East are also more likely to be tech founders than their Western counterparts.

"Thirty-five per cent of women are entrepreneurs in the Middle East, but in the US, when it comes to tech, it's less than 10 per cent," Jordanian entrepreneur Evelyn Zoubi told ZDNet in 2016. "I thought it would be the opposite," she said reflecting on her move to the Bay Area.

Globally, women are 25 per cent less likely to participate in the labor market, the International Labour Organization (ILO) revealed in their World Employment and Social Outlook: Trends 2018 report. "These gaps are particularly wide in Northern Africa and the Arab States, where women are twice as likely to be unemployed as men," they wrote. 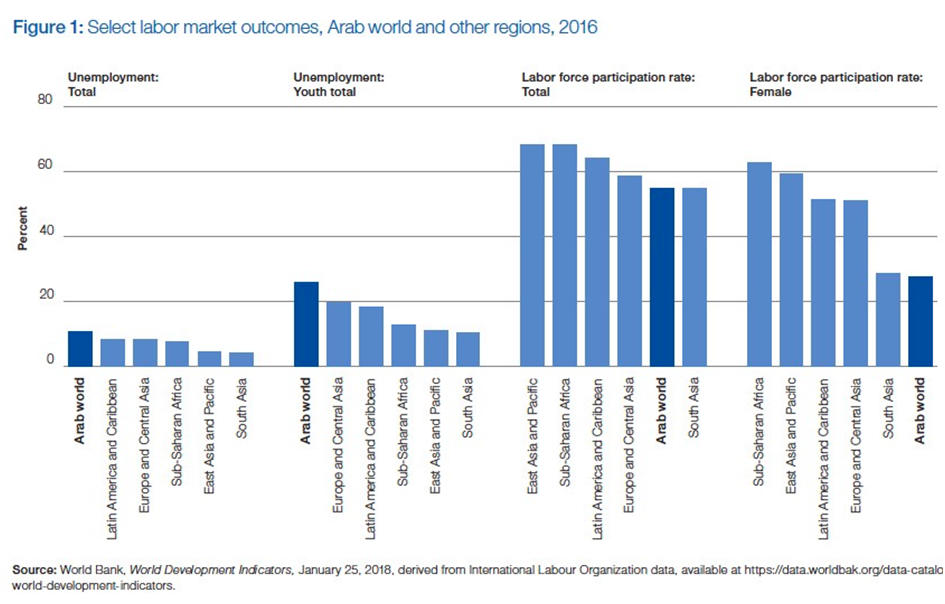 HARNESSING THE POWER OF ARAB YOUTH

In the Middle East, young people constitute over half of the population, but the lack of economic opportunity is a major ongoing source of disquiet for many. It is essential that this situation is remedied, so young people are more effectively engaged in the economy and society. To do that the following issues need addressing.

4. Tackling youth unemployment. Globally, the ILO found "young people are much less likely to be employed than adults, with the global youth unemployment rate standing at 13 percent, or three times higher than the adult rate of 4.3 percent".

This problem is even more acute in the Middle East. The region has the highest level of youth unemployment in the world. "In Northern Africa," the ILO observes, "almost 30 percent of young people in the labor market are without a job."

Across the region, youth unemployment is five times higher than the adult average; with university graduates constituting nearly 30 percent of the total unemployed.

5. Valuing and empowering youth. Esra'a Al Shafei, founder and executive director, Majal.org in Bahrain, and a Shuttleworth Foundation fellow & MIT Media Lab fellow, contends that if afforded the opportunity, this digitally-savvy cohort could use new technologies to help tackle many of the biggest challenges that Arab societies face.

"By supporting the innovations of our newly connected youth, we can encourage them to develop effective solutions to various social problems – anything from economic and gender inequality to the refugee crisis," she recently wrote.

"We must provide a safe, nurturing space for Arab innovation in the region or risk losing our brightest minds ... to greener pastures elsewhere in the world," she added. "Arab countries need to be hospitable to their home-grown ideas and the best hopes for the future of its young people."

6. Investing in education. UNESCO concluded in 2015 that "there is a clear mismatch between the skills graduates are being given and labor market demand".

Correcting this imbalance needs to be accompanied by a wider reinvigoration of higher education curricula, which they described as "mostly fact-heavy and lecture-based, with a limited use of ICT tools and hands-on learning and little contextualization".

It's a situation that young people in the region know needs to change.

"Across the Middle East, 29 percent of young Arabs identified modernizing the education system as one of the top three things that governments must focus on to move the region in the right direction," Sunil John, founder and CEO, ASDA'A Burson-Marsteller, the company behind the annual Arab Youth survey, recently told ZDNet.

"GCC states have woken up to that in recent years and have pledged greater emphasis on STEM education, but the region as a whole needs a focus on building a modern education system that can prepare the region's youth for the jobs of tomorrow," John said. 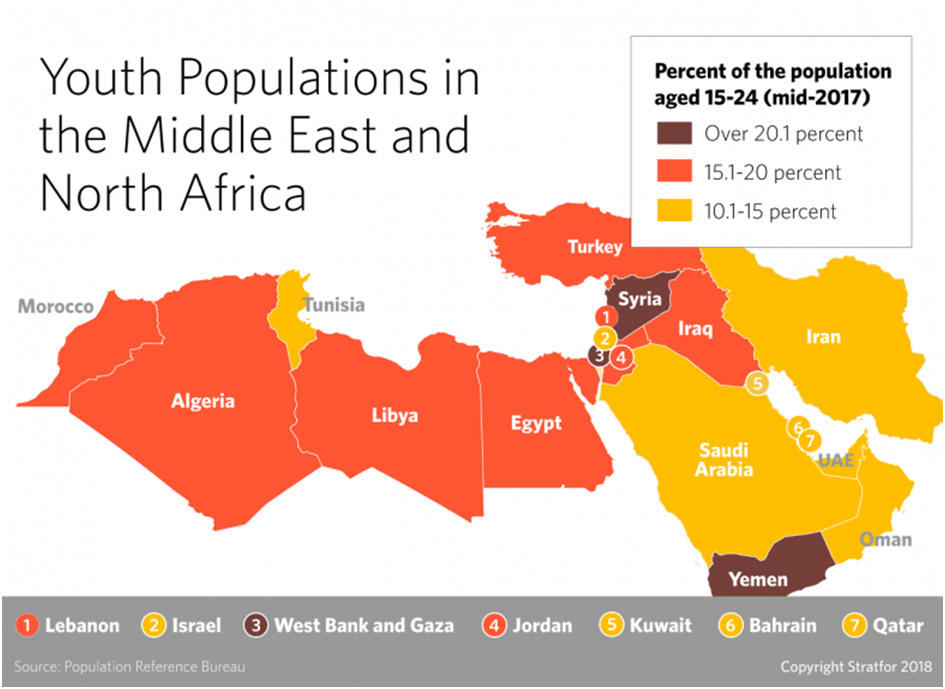 In the Middle East, young people constitute over half of the population, but the region has the highest level of youth unemployment in the world.

MAKING IT EASIER TO DO BUSINESS

Legal and logistical roadblocks have long plagued businesses and entrepreneurs in the region.

Although progress has been made, further efforts to improve the regulatory environment, remove barriers to competition, especially in finance and land, and reduce bureaucratic red tape would be welcome. Without this reduction, countries risk deterring private-sector investment, limiting opportunities for innovation, and stifling creativity.

Middle East tech: Nine things the region must do to safeguard its financial future