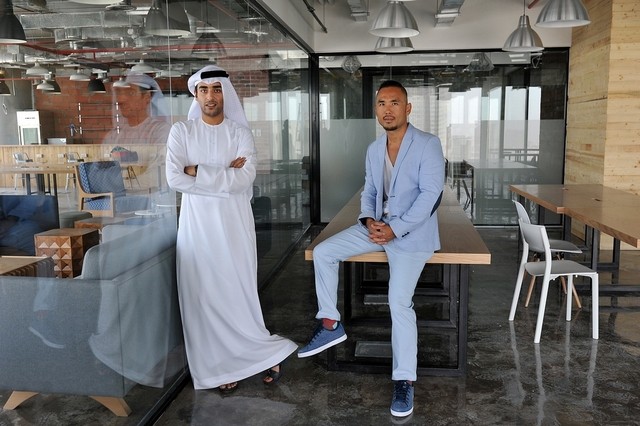 When Bernard Lee first planned his new co-working office space in Abu Dhabi, he says he naively thought the market would operate like New York, where he used to work. Start-ups there consider working out of a coworking space a mandatory part of their life cycle, he says. He was wrong. As the single office space offering in GlassQube Coworking thrived, the coworking area, which could fit about 60 people, sat almost completely empty. He was stumped and set about trying to find out why. Mr Lee opened the business with his Emirati partner Fahad Al Ahbabi on Reem Island last July, and the company is now building a 100,000 square feet flagship location in downtown Abu Dhabi. Here he speaks about what he has learnt about coworking spaces here.

Why were start-ups not using the coworking space, in your opinion?

My interpretation of it, and some start-ups may argue with me, is that part of it is cultural. There is a cultural gap between the markets I am referring to and the Arab world, where communal space is still something that is new to the market. I don’t think anyone would argue against that. But that doesn’t explain all of it, because if that were the case these communal spaces in Dubai would not be working, and they are. The other missing pieces to the answer are specific to the psychology of start-ups here in Abu Dhabi. In New York, start-ups have placed a tangible value on the coworking space. They think "I am a start-up; I am going to meet other start-ups. I am going to potentially meet other founding partners, or technical partners or technical staff or sources of capital, and all of these very critical experiences and resources I will have access to in a good coworking community’". That value proposition doesn’t exist here. And it’s not the fault of the start-up, it just hasn’t taken root here.

So what are you saying? It’s too new?

That’s part of it, but it has been happening in Dubai for a number of years, so it is not so new that it’s completely outrageous. Coworking has been around for many years now.

What else explains it?

There are a bunch of structural pieces that are missing, so the start-ups themselves haven’t had the exposure to give them the frame of reference to understand the value of being in a coworking space. What I mean by that is in a market where there is thriving start-up ecosystem, you have government support. You are going to have very strong private sector support and those things will lead to great educational and capital resources and then there will be a confluence of all of these moving pieces in environments like coworking spaces. So a start-up will go into a coworking space and be exposed to all of these.

It’s all missing – a start-up goes into a coworking space like GlassQube and none of those things are there. There is certainly a good intention to [support start-ups on the part of the government]. But the legal framework and the cost that is involved in starting a business are not unknown to be huge challenges here. We have certainly talked about that at GlassQube. But again that’s not the whole answer. Because of these missing pieces, a start-up doesn’t get that educational experience where they can put the value on something like co­working. Without meaningful private-sector support, which you see in developed start-up markets, it will not work.

What do you mean by meaningful private-sector support?

Who are the big players in Abu Dhabi? It’s oil and gas aerospace, to some degree technology and finance. So those are the private sectors that have to play a meaningful role in supporting the ecosystem. And that is not happening. I will give you an example. On December 8, we did a fintech hackathon in partnership with Startup Weekend – a Google for Entrepreneurs hackathon event that happens around the world. It was also sponsored by Abu Dhabi Global Market, the financial regulator in Abu Dhabi, and Temenos, which is a fintech API ecosystem. It was a great event, huge. It totally blew my expectations out of the water, not only in terms of the turnout, but the quality. I had approached several of the key major financial institutions in Abu Dhabi. They knew about the event. None of them showed up. There was no official representation from any major Abu Dhabi financial institution at the event. We delivered to their back door [something] that was extremely sector-specific and they couldn’t even be bothered to get out of bed and show up for one hour. That tells you everything.

Is your coworking experiment over?