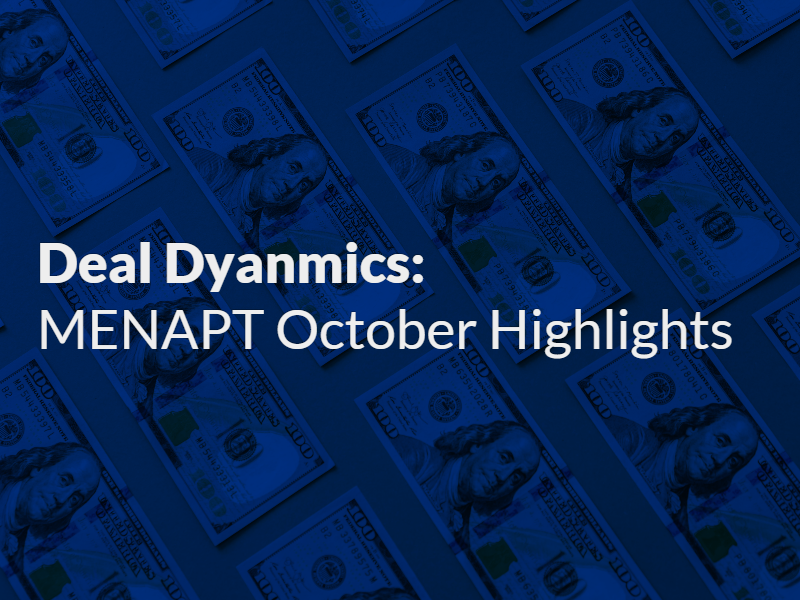 Q3 marked major strides capitalizing on an exceptional year for VC spaces across all Emerging Venture Markets. A strain in investment activity caused by a global pandemic in 2020 could have resulted in accrued capital that pushed unprecedented deployments this year across MENA, Turkey, and Pakistan. If we’ve observed closely these Emerging Venture Markets in the previous years, which we have, it is the end-of-year funding rounds that really start telling how 2022 will look like.

As we release our October 2021 Venture Investment Dashboard covering VC activity in MENAPT, we’re observing a momentous closure for a monumental year. Investment in MENA is nearing the $2Bn mark with almost $150M raised in October. Remarkably, Q4 funding seems to just be getting started in that ecosystem where startups like Egypt-based Rabbit, UAE-based Immensa, Bahrain-based coinMENA, and Jordan-based EonDental closed multimillion-dollar rounds, driving MENA’s capital deployment up by more than $50M this week alone. Q4 seems to be starting off steady for Turkey and Pakistan as well. In the first month of Q4, Pakistan still observes unprecedented international investor participation with global investors like US-based +92 Ventures, Germany-based Global Founders Capital, and UK-based Zayn capital closing rounds in October. Turkey, on the other hand, was the only geography of the three to record a month-to-month growth in capital deployed (33%).

We stand at a pivotal moment before witnessing how the last two months of the year will play out. As we record shifts in VC spaces across MENAPT, we explore three key highlights in October:

Only Healthcare and Transport & Logistics amongst the top 5 industries in MENA observed a year over year growth in number of deals over October 2021, growing by 50% and 300% compared to October 2020 respectively. Overall, compared to September, deal volume in MENA grew by almost 10% MoM. Whilst the usually suspected industries like FinTech, with innovations like BitOasis and Sarwa, and E-commerce with rounds from Chari.ma and Seez, drove the lion’s share of investment, it was a $64.5M deal by Red Sea Farms that put the Agriculture Industry in 1st place over the month.

Most interestingly, October welcomed a new investor backing the most number of deals across MENA. Orange Corners, an initiative of the Kingdom of the Netherlands aimed at stimulating entrepreneurship amongst African and Middle Eastern youth culminated in 7 Early-stage investments backing startups of different industries in Sudan.

In an exceptional year for the Turkish VC space, capital deployed in the ecosystem crossed the $3Bn mark, following a record-breaking $1.7Bn in funding over Q3 2021. While the ecosystem observed a 33% funding growth between September and October, 1 deal closed by automobile digital marketplace Vavacars accounted for 95% of all funds raised during that month. This growth in funding, however, was not reflected in deal volume, where for the first time throughout the year Turkey observes its sharpest month-over-month drop, closing 65% fewer deals than the month before.

Over in Pakistan, a 43% MoM deal drop meant 4 deals closed over October. The F&B marketplace Munchies, grocery e-commerce Tazah Technologies, last-mile delivery startup Rider, and cash on delivery and receivables factoring solutions provider PostEx all raised almost equal deals in the first month of this last quarter, with the average funding round of the month nearing $2.075M. This adds to Pakistan’s solid base of Early-stage deals ($500k-$3M), which by Q3 2021 accounted for more than 40% of total deals across the country.

Looking for leads in this starup scene? Browse 6,240+ startups in Egypt, KSA, and UAE