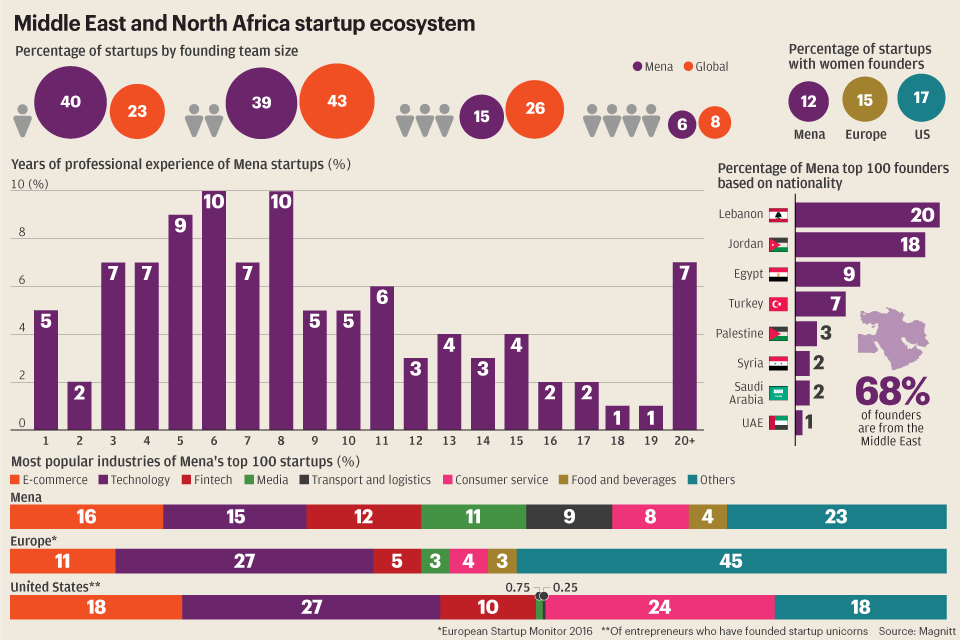 The region’s growing population of entrepreneurs will find that access to capital will improve amid greater interest from global investors in the Middle East and North Africa’s start-up ecosystem.

While the top 100 start-ups in the Middle East have raised on average over US$500,000 each in funding, according to research from Magnitt, a networking site for investors and entrepreneurs, this is low compared to the United States and Europe.

“There has been a paradigm shift and the amount of start-ups is now growing exponentially,” said Khaled Talhouni, managing partner at Wamda Capital, a regional venture capital fund investing in technology-enabled companies.

“We still think the region is underfunded and the opportunity is still with the capital, while Dubai Holding [for example] with its SME fund has helped early stage investment, there are still gaps in the market place.”

The recent sale of regional e-commerce firm Souq.com to Amazon is set to attract a greater number of international investors to the region. Dany Farha, chief executive of regional VC Beco Capital, said its deal flow had jumped 140 per cent from 2015 to 2016.

“This strong growth in the number of opportunities continues with Jan-Feb 2017 being 70 per cent higher than the same time period in 2016,” he said. “We see high-potential start-ups raise seed rounds of about $750,000 in order to find product-market fit, before raising larger Series A rounds of between $2 million to $5m in order to scale across the region.”

However, the strong backgrounds of entrepreneurs in the region mean they are robust enough to deal with any short-term gaps in funding, according to Magnitt’s research. Mena start-up founders had on average nine years’ worth of experience before starting their companies. That compares to six years for the most successful start-ups in the US.

More than 40 per cent of Mena start-up founders are graduates of elite business schools including Harvard, Insead and LBS. Almost a third come from finance or management consulting backgrounds and just under half have technical degrees. According to Magnitt, 35 per cent previously worked at leading regional e-commerce companies such as Yahoo Maktoob, Dubizzle, Bayt and Zawya.

“Such individuals are likely to have the cash to bootstrap, experience to deal with the regulatory environment and perseverance to succeed in a nascent ecosystem,” said Philip Bahoshy, Magnitt’s founder.

As more international investors fix their sights on the region, pot­entially increasing the pool of funding available, expectations will also rise.

“As the amount of investment increases, so does the talent pool that drives the start-ups,” said PK Gulati, founder and managing partner of Smart Start Fund, a regional angel investor.

“I have invested in 11 start-ups in the last 18 months but only two in the Mena region. The ecosystem is far more competitive now that family groups have seen the potential for exits. When international players join the ecosystem the start-ups themselves have to be better and that is what we are seeing.”