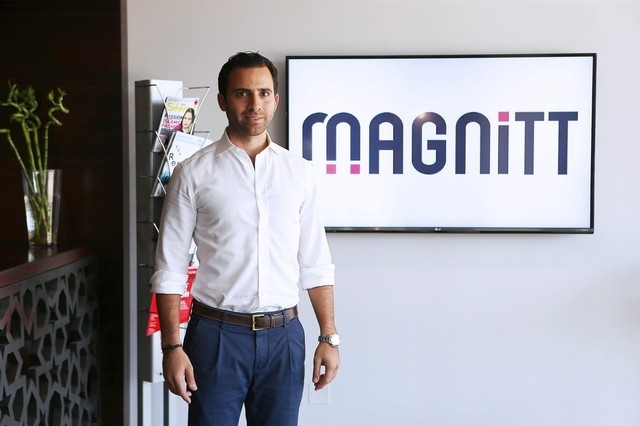 Thanks to The National for the feature!

Although often geared towards high-tech industries, start-up pitching events can sometimes seem a little, well, low-tech. That is something the Dubai resident Philip Bahoshy wants to change with his own venture, Magnitt.com, which is itself a kind of start-up for start-ups.

The Iraqi-British entrepreneur launched the site in September as a way for young businesses in the Middle East and North Africa to connect with investors, mentors and co-founders. The site lists start-ups’ elevator pitches and funding requirements, and lets interested investors connect.

Mr Bahoshy says Magnitt can act as an alternative to in-person pitching meetings, where entrepreneurs sell their ideas to potential investors in Dragons’ Den type settings. It currently has about 150 start-ups listed and more than 1,000 registered users. “When you go to a pitching competition the maximum you’ll probably get out of it is an exchange of business cards with a view of setting up a second meeting,” he says. “We’re trying to work with the incubators and the accelerators to say: ‘let’s try to take that concept online’.”

Here the 31-year-old explains how he wants to create conversations in the region’s start-up space – and his own business case in doing so.

Why do we need Magnitt?

The initial concept was trying to connect start-ups to investors. We identified that the real pain point in the region is access to angel funding – basically $100,000 to $250,000. Venture capital firms are clear: they are out there and they are identi­fiable. You can probably muster up the early stage of funding to get yourself going. But it’s ­really the stage in between, to get yourself VC-ready, that is missing.

How does the site work?

What we were trying to say was: how can you replicate the pitching competition or the first-round interview with investors? Our philosophy is that you basically need to answer five simple questions: what is your elevator pitch, what is your problem and the solution for it, what’s the target market, how do you look to monetise, and who is your competition? We tried to frame the story as those questions, and then character-restrict them to try to get the start-ups to really focus their answers.

And how would an investor use it?

You have filters to help guide you through anything you are specifically looking for. If interested you can “like” [a start-up] and put them in your favourites. If you want to pass on them, you can pass on them. And then you can deep-dive into any further information, ultimately with the goal of connecting with the entrepreneur.

It is a comparison that has been made, and there is a little bit of logic behind that. If you go on many of the different sites that already exist, one of the frustrations is that there are so many ideas on any given page, that as an investor, as a user, you get a little bit lost … What we try to do is create this funnel approach, where all you ever see is one pitch at a time, which you can either pass on or like.

What results has the site generated so far?

We’ve been thanked by a couple of start-ups for hiring people that connected with them on the platform. We’ve introduced quite a few mentors. Although we’ve introduced and had several discussions around funding, the funding time frame takes a little bit longer. So we’re still waiting on the closure of some deals, but they are in final stages as well.

Isn’t the real problem a lack of available angel funding rather than awareness of what start-ups are out there?

The angel market in the region is still somewhat underdeveloped, and there are several reasons for that. But the best way of tackling that is raising awareness, providing people the opportunity to interact and better familiarise themselves with the different concepts.

What are some of the notable start-ups that have listed on Magnitt?

We’ve tried to push for all types of start-ups. One was Finerd – an online portfolio management company. One that is particularly of interest for me is The Coding Circle. That one tries to set up in-person education for children, from the age of 10 to 20 on [computer] coding – which is currently not necessarily being done at school.

The site is currently free to use – so what’s your own monetisation plan?

As we continue to develop and grow the platform, we will be launching different services … as well as advertising space for different service providers. I will be going for fundraising myself in the next two to three months.

So will you be putting Magnitt itself on Magnitt?

Magnitt has been on Magnitt from day one.