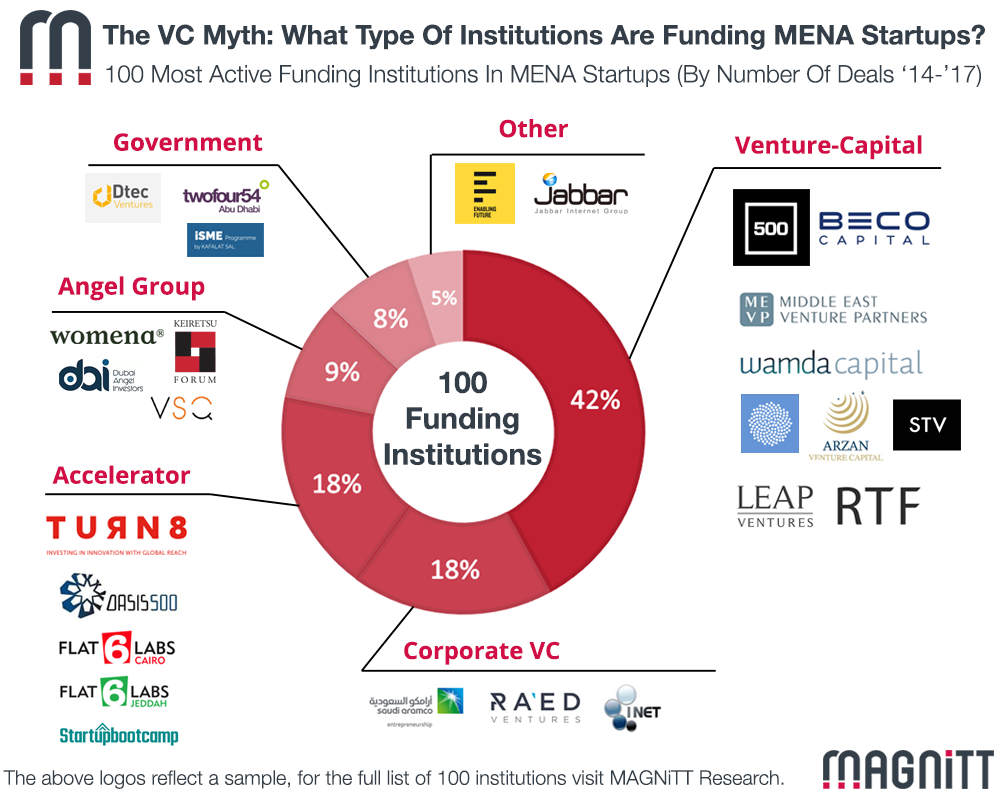 What is the role of venture capital (VC) firms? How many of them are actually active? And how do they all differ?

MAGNiTT identified over 100 institutions that have successfully participated in funding startups across the Middle East and North Africa (MENA). The information obtained through this proprietary research ranked the most active investors by number of deals, made across the region in the past 4 years, and then broke them down by investor type. Subsequently, differences and trends within the investor types could be identified, which we outline below.

You often hear “but there aren’t that many VCs across the region?” at conferences and meetings. Contrary to that popular belief, MAGNiTT data shows that “pure” VC firms remain the leading source of investment fueling startups across the MENA region.

Philip Bahoshy, MAGNiTT’s founder, notes, “What’s interesting for us to understand is the nuances between the different venture firms, how many of them have an LP/GP structure versus those who manage a corporate entity or individual family funds.”

For the full list of the top most active 100 funding institutions visit out research at the following link HERE.

For a list of publicly available LPs and VCs in MENA region, visit our tracker at the following link HERE.

How is a Venture Capital (VC) firm structured? Typically, VCs are organized as partnerships. The general partners (GP) serve as managers of the firm and service as investment advisors to the venture capital funds raised. Investors in venture capital funds are known as limited partners (LP).  LP’s generally comprise of both high-net-worth individuals and institutions with large amounts of available capital, such as state and private pension funds, university financial endowments, foundations, insurance companies, and pooled investment vehicles, called funds of funds.

According to Hasan Haider, Partner at 500 Startups, “The LP/GP structure provides a clear differentiation between who manages the fund and who the investors are. The issue with some of the quasi-partnership structures/holding company structures, which have been used in the region, is that this distinction is very weak, and so the performance of the fund is not clearly attributable to any party.”

As for the additional benefits of the structure, Haidar added that “the investors are limited partners and are not managing the fund. Their liability is limited entirely to whatever they invested, nothing more. It’s the general partner that has unlimited liability for anything that might occur related to the fund.”

Examples of LP/GP venture capital firms in the Middle East include 500 Startups through their Falcon fund, Middle East Venture Partners (MEVP) and Wamda Capital, amongst others. In other cases, Government entities have seeded the Venture fund while in some cases holding companies have been created to manage family wealth. The lack of clarity around venture capital licensing and structuring has been a reason for the variety of different structures that have been created in this space.

Haidar highlighted that fund managers in the region face challenges, stating that “one of the main obstacles is related to fundraising. The asset class in the region is still not on many investors’ radars, and the number of active LPs is very low compared to almost every other market.” As for family offices, Haider said that, “many don’t see the value of venture capital specific expertise, and try to invest on their own, despite the fact that if they were to invest $1m with a VC fund, the management fees at 2% per annum would come to $20,000 a year, less than it would cost them to employee someone to look at deal flow, analyze the deals and execute on VC.”

Adding to the previous point, Bahoshy notes that while there are challenges with fundraising “that there needs to be a general acceptance from LPs that patience is required. With 60% of MENAs top funded startups founded between 2012 and 2015, we have a while before LPs and GPs see actualized returns on their investments. This is despite a slowly accelerating rate of exits in the region. He also adds, “with major exits, VCs will see returns for their LPs, which in turn will create additional appetite for this asset class strengthening the ecosystem”.

In addition to the “pure” Venture Capital firms, we have seen the emergence of corporate venture capital firms (CVC) across the MENA region. Since 2014, based on the number of deals, CVC equates to 18 per cent of the top 100 active investors across the region. Examples include Wa’ed Ventures, Ra’ed ventures, and iNet Investments. Although similar to the “pure” venture capital firms, the way they differ is that their fund is seeded by a single Corporate Entity rather than multiple LP investors. For example, Wa’ed Ventures is a corporate venture capital firm that received its funds from Saudi Aramco, the state-owned oil & gas conglomerate from Saudi Arabia.

Abdullah AlTamami, Investment Director at iNet, who have recently made multiple venture investments, comments on the strategic benefits of supporting Venture Investments as a CVC, “When we invest in a company, we put in our time as much as putting in our money. We strongly believe that strategic benefits to a growing startup can be much more valuable than just money, especially in the MENA region where the ecosystem is still nascent. He also adds, “although we typically inject a sizable amount of cash, it is our effort and active involvement with our portfolio companies that enables the highest possible return and success for our investments." Hence, despite the difference in the source of the funds, it can be seen that corporate venture capital firms and “pure” venture capital firms are – unsurprisingly – very similar in their approach to investing. However, CVCs often have a strategic focus on industries with synergies with in which they operate.

However, the main difference is often in the way that GPs are compensated. In terms of evaluating performance and payoff, Hasan Haider notes that “the usual carried interest imbedded in the GP / LP structures for VCs also very closely aligns the fund managers incentives with that of the LPs, rather than just management fees, salary or bonus-based incentives”, which can be commonly found in Corporate Venture Capital Funds. 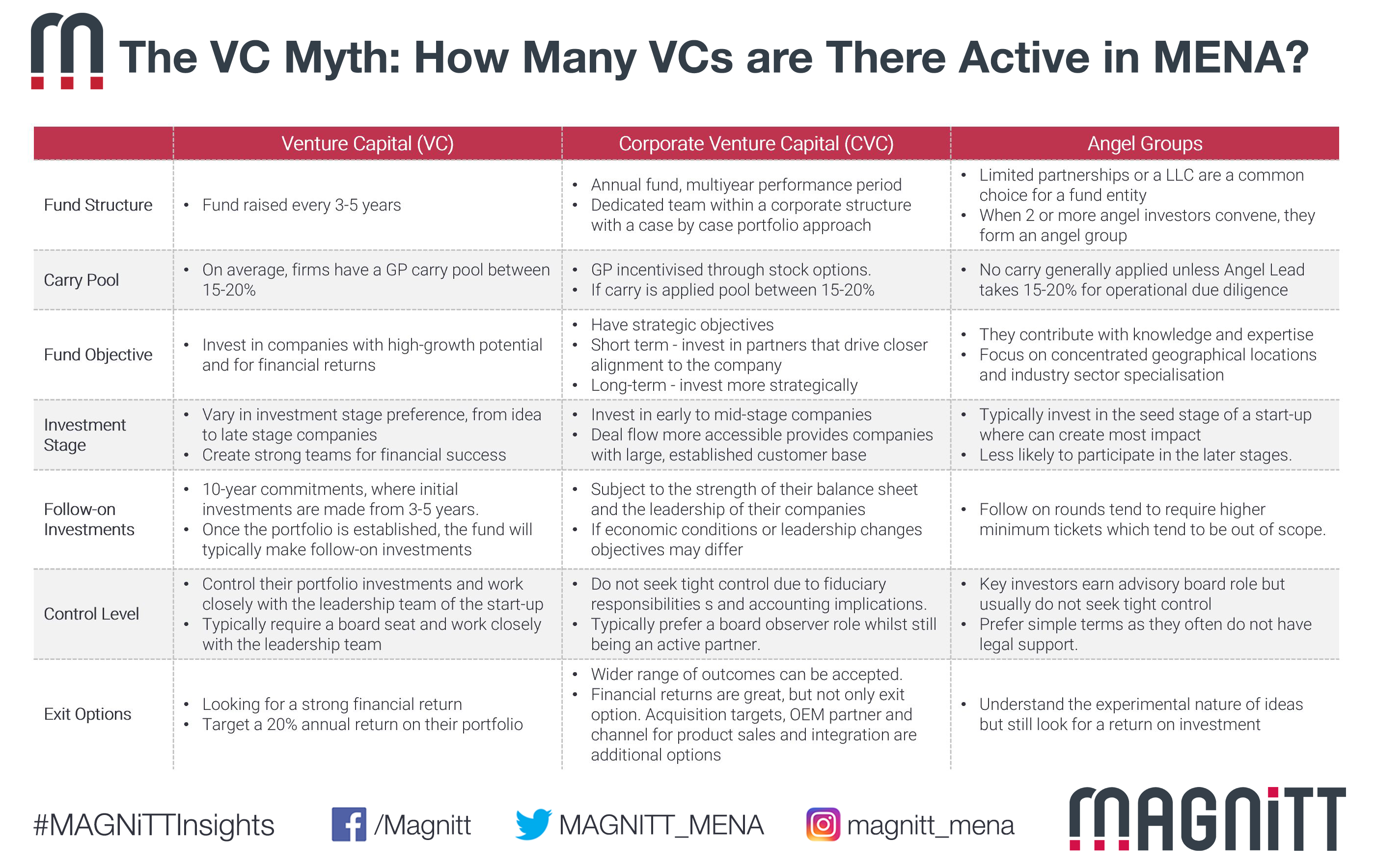 Another type of prominent funding institution that has surfaced in the region are angel groups, who collectively invest in startups by pooling their funds. Unlike Venture Capital firms, Angel Groups do not usually have a GP/LP structures, but are rather a structured group of individuals that invest on their own behalf. Based on the aforementioned research by MAGNiTT, angel groups total 9 per cent of the funding institutions in the region – some examples include Dubai Angel Investors, OQAL, VentureSouq, and Womena.

Bahoshy notes that “early stage investment is one of biggest challenges in a founders journey. In the absence a vibrant Angel Community in recent history, established VCs have had to play the role of Angels, funding startups at a very early stage.” However he notes “as interest in startups and technology has grown, Angel Groups have filled the void needed to support startups at an early stage. However, more is required to incentivize individuals to invest in technology companies when setting up.”

Tarek Amin, Founder of Dubai Angel Investors (DAI), shared, “as angel investors that have been investing in MENA startups for over 10 years, we realized that, while the number of angel investors was increasing, more was needed to structure and unlock additional value for technology startups.” Just like (corporate) venture capital firms, Angel Groups “leverage [their] collective experience as well as [their] extensive network of contacts to add value to investees through [their] ability to open doors and to mentor them. “

However, in contrast to the similarity, there is a difference between Angel Groups and Venture Capital firms. Amin echoes Bahoshy’ sentiment by saying that “the increase of Angel investors and Angel Investor Networks continues to be important in our region, as VCs that were typically looking at earlier stage deals are moving upstream into late seed, series A and beyond as they launched follow-on funds.”

Moreover, there is a clear difference between a nascent start-up ecosystem, like the MENA region, and more developed start-up ecosystems, like Silicon Valley. This difference becomes especially clear when we look at the role that Angel Groups play, as well as who those respective Angel Investors are. As mentioned previously, Angel Investors in the MENA region are usually well-off individuals, whereas more developed start-up ecosystems, as Amin notes, often have “angel investors [that came] from startups founders who had realized gains on their first exits.” In other words, due to the relatively young state of the start-up ecosystem in MENA, except for a few examples including Fadi Ghandour, Samih Touqan and Dany Farha, there are limited examples of Angel Investors who originate from having exited their own start-up venture. In contrast, “an increasing number of angels are forming angel groups or networks so they can pool their resources of experience and capital and make bigger and better investments across the region”, according to Tarik Amin.

Key characteristics of angel groups include:

In the absence and challenge of early stage funding, we have also seen the emergence of accelerator programs that have become increasingly prominent in the region. Flat6Labs, for example, houses 6 accelerator programs recently launching their Bahrain and Lebanese entity. These programs have a duration of 3-4 months and equate to 18 per cent of investments in the region, according to MAGNiTT.

While the above mention the most prominent funding institutions that have invested in MENA startups, other also include Private Equity, M&A, Public Securities at the later stage.

For the full list of the top most active 100 funding institutions visit out research at the following link HERE.

For a list of publicly available LPs and VCs in MENA region, visit our tracker at the following link HERE.