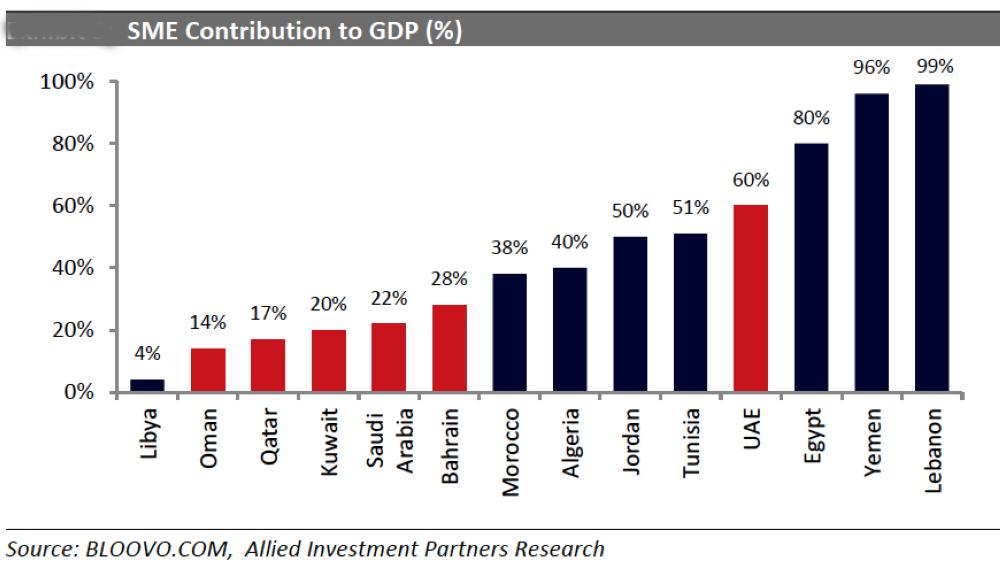 JEDDAH — As efforts to stimulate economic growth in the Middle East and North Africa (MENA) territory remain on course, focus is now shifting to small and medium enterprise-driven strategies in a bid to accelerate growth, a report by Allied Investment Partners PJSC revealed. “This comes on the back of declining oil reserves and revenues, which served as a wake-up call to the MENA governments on over-reliance on their energy reserves to fuel their respective economies,” it noted. But even as regional political and socio-economic realignment continues to take shape, government-driven diversification agendas are steadily mainstreaming SMEs and mid-market companies as key economic growth drivers. In its report titled “Financing of SMEs and Mid-Market Companies”, Allied Investment Partners paints a positive outlook for the regional economic growth. This, the report said, is as a result of the regional governments’ renewed commitment and focus towards the development of their respective SME industries through their national long-term programs and vision plans. According to the report, the governments, especially in the GCC have realized that the SME industry now plays a pivotal role in balancing the economic development of the region. Their role, however, remains subdued as their overall contribution to the GDP remains substantially low despite making up close to 90 percent of the total companies in the GCC. With an estimated value at $1 trillion, the MENA SME industry has become important in promoting competitiveness, increasing productivity, and most notably the creation of employment opportunities. This, according to the report, is as a result of the ballooning number of entrepreneurs driven mainly by favorable demographics, improvements in ease of doing business, progressive economic conditions, and lucrative, fast-growing markets. According to the IFC, the broader MENA region has over 5.5 million Micro, Small and Medium Enterprises (MSMEs), the majority of which are microenterprises. In the GCC, SMEs constitute close to 90% of the total companies base, with Bahrain having the highest share with 99% of the companies being SMEs. In UAE, Saudi Arabia, Oman and Kuwait, SMEs represent over 90% of the total registered companies, while Qatar trails behind with 75%. However, Egypt, Lebanon, and UAE SMEs remain the most important contributors to GDP, accounting for 80%, 99%, and 60% respectively, while the contribution is significantly lower in Oman, Qatar, and Kuwait. Given that SMEs represent a significant proportion of the total registered companies in most of the MENA countries; their contribution to the overall GDP remains substantially low. Notably, the regional ventures still do not have the same beneficial impact as their counterparts in developed markets such as the EU, which derives at least 55% of its GDP from SMEs. Resultantly, very few SMEs have grown into large-scale enterprises in the region over the last decade. SMEs have also become important in promoting competitiveness and introducing new products or techniques to the changing market dynamics in the region. Moreover, they are also responsible for increasing productivity, mostly through expansion and inorganic strategies, and create employment opportunities. Notably, the number of entrepreneurs starting a business in the region has grown exponentially over the past few years due to favorable demographics, improvements in ease of doing business, progressive economic conditions, and lucrative, fast-growing markets. Moreover, the governments have recognized that to attract overseas entrepreneurs, they will have to encourage investments and ensure they support and foster the market. The report also cited 2017 as a landmark year for the MENA startup ecosystem - a trend that has continued its acceleration onto 2018. The region currently boasts the highest number of business owners under 35 years or the so-called ‘millennial entrepreneurs’ with the UAE leading the pack as home to around 42 percent of startups followed by Egypt with 12 percent.