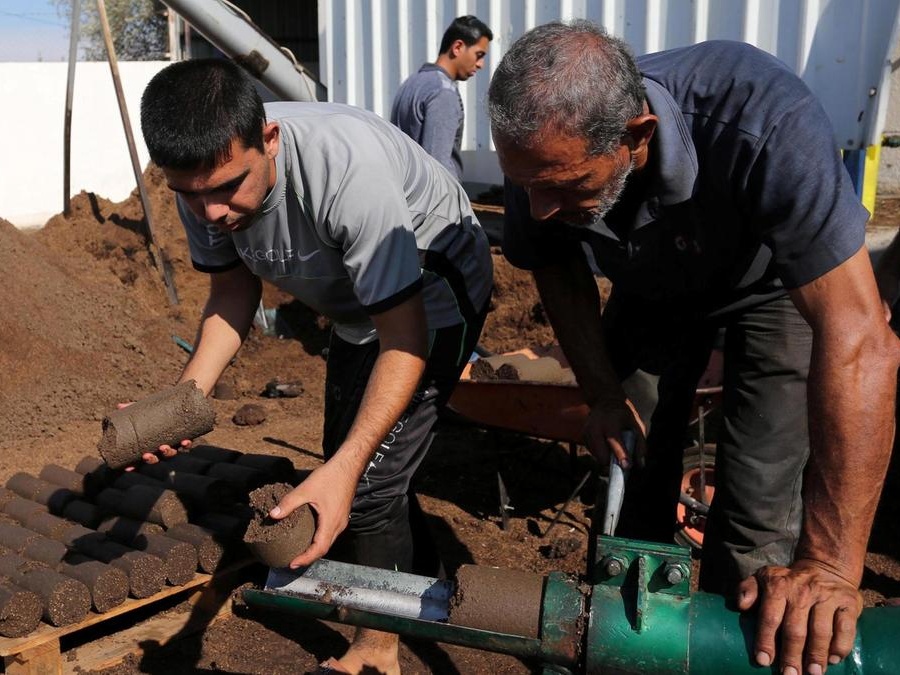 The method provides not only a cheap fuel to local people, but an environmentally friendly use for the olive harvest waste

As Gaza lives through its widely popular season of olive harvest and olive oil, three young entrepreneurs are making remarkable use of the abundant waste created from the process.

The motivation for their work is the desire to address three of Gaza's most persistent issues on a micro level; a staggering 78 per cent unemployment rate among university-educated youth, environmental deterioration and scarcity of energy.

"Gazans are one of the most highly educated people in the region, yet they are faced with unmatched crises," project leader Tamer Abo Motlaq told The National.

“Entrepreneurship is the answer for young Gazans to overcome obstacles and challenges in the way of securing a better future."

"We couldn't afford to buy necessary yet expensive machinery with the small funding available, so we designed our own machine from scratch with the help of some friends who studied mechanical engineering and a local workshop," said Tamer. "Our first few attempts failed, but we eventually got there at a total cost of $3,000 including the damages, compared to buying a new machine for $11,000."

Through a process involving olive waste grinding, chemical treatment to lower emissions, smoke and burning smell, and finally compressing, the team produces olive cake pellets called 'Jeft' at a rate of 1,000 Kg per hour, sold at a locally-affordable price of $150 per ton.

The final produce makes a significant contribution to the local environment in three different ways, the team said.

First, the project provides an innovative solution to manage large quantities of waste, where "oil extraction leaves behind about 40 per cent of waste of the olive harvest," Associate Professor of biochemistry at Al Azhar University, said Dr Hassan Tammous.

"Annually, oil extraction in the West Bank and Gaza leaves behind about 80,000 tons of olive pomace, disposing of this waste is a concerning matter where people usually end up either dumping it in open areas and farms or throwing it in the sewers."

Dr Tammous explained that olive waste contains polyphenols and other chemicals that can contaminate water and are toxic to microorganisms, soil and agricultural produce if dumped in open areas, which highlights the importance of the Jeft project in recycling that waste.

"We didn't suffice with recycling olive waste," said Tamer. "We're considering to further collaborate with another entrepreneurial project to use Jeft ashes to produce concrete blocks, known as Green Cake, to leave no waste behind."

Two more significant contributions of the project are reducing the demand on firewood by providing a cheaper, more sustainable and more efficient alternative, while also creating a renewable source for fuel and energy, alternative to fossil fuel which Gaza suffers a shortage of. According to Dr Mazen Abu Amro, Engineering Professor at Al Azhar University, 0.23 kilograms of Jeft can produce 1 kWh in steam turbines. It approximately takes 0.386 kg of average hardwood to produce the same amount of energy.

"Locally supplied firewood comes from citrus trees, which are not available in abundance in a densely populated urban area like Gaza," Tamer explained. "Furthermore, a Jeft block burns for about 7-10 hours on average, compared to firewood burning time of 4-5 hours."

In terms of cooking, Tamer elaborated that "five blocks of Jeft that cost few cents could be used instead of a gas cylinder that costs 64 Shekels [$18]."

Locally marketed on social media, the demand on Jeft is increasing dramatically in Gaza. The team has now contracted with some local factories to supply olive cake pellets year-round as an alternative energy source.

Other customers are farmers who use Jeft to produce heat in chicken farms and greenhouses during the winter, in addition to rural households in Khan Younis who use it for heating and cooking.

"Our product has become popular and the demand for it now exceeds the supply. We aim soon to double our team, which currently consists of 10 workers and three engineers, and we will have to make a second machine."

The team is already working on their next entrepreneurial idea. "Our next plan is to develop a device that supplies enough electricity to charge a phone while also providing heat from Jeft," Tamer added.

"We hope that by demonstrating Gaza's strong entrepreneurial spirit, resourcefulness, and the enthusiasm of its youth to challenge their unjust situation that our project will be a foundation stone for a wider work to address Gaza's crises by utilizing its youth capacity.

“All we need is a genuine opportunity."