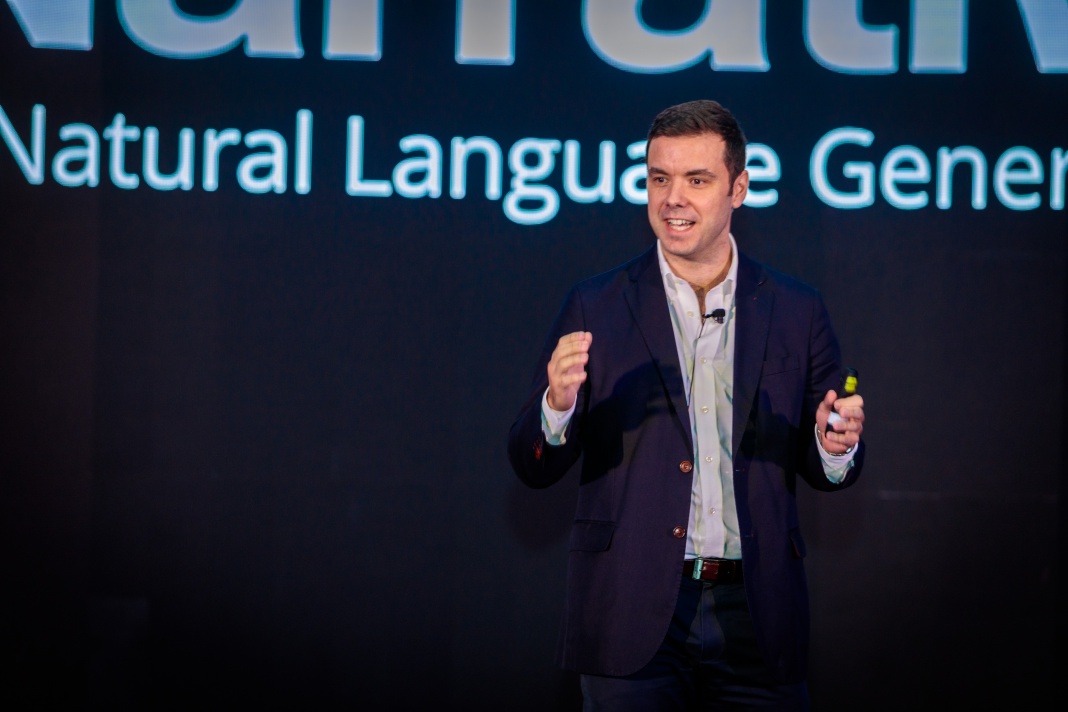 SOURCE: Inc. Arabia - Meet One Of The First AI Startups To Get Funded In The UAE

Narrativa is the only company worldwide that uses AI to generate content in Arabic.

Artificial Intelligence (AI) startups are in the crosshairs of investors all over the world right now. And with its push towards being a more tech-smart nation, it was never going to take long for UAE to get in the game.

Which it has, now.

Narrativa, a technology company that uses AI to translate data into easy-to-understand content, has raised a pre-Series A round (undisclosed amount) led by twofour54, a tax-free, state-backed media and entertainment free zone based in Abu Dhabi.

Founded in 2015, Narrativa is one of very few AI startups to have received funding in the UAE, and perhaps the MENA region, so far.

“Big data and AI…it’s revolutionizing the way we produce and consume content,” says the company’s CEO, David Llorente, “but because of the sheer amount of data, there is a lot that no one is reporting on.”

The Narrative of Data

With most of its clients in the UAE and Saudi Arabia, it’s also the only company worldwide to generate content in Arabic using AI—along with several other languages.

The young, tech-savvy Arabic speaking market was of particular interest to Llorente, and the reason for bringing and growing the company in the UAE.

“There are 350 million Arabic speakers, and most of them are under the age of 35, and they’re all almost a hundred percent online. However, only approximately 2% of the online content that they consume is in their own language,” he points out.

Together with his team consisting of two professors at the University of Alcalá—Eugenio Fernandez (one of the top AI experts in Europe), and Antonio Moratilla (a big data and software expert)—Llorente hopes to expand his company into the wider MENA market.

He also wants to move into other industries where content can be generated but has not been looked at with such an eye yet, for example, oil and gas.

The funds they’ve received in this round will go towards team expansion, sales and marketing, and technology development to further enhance Narrativa’s proprietary AI technology, according to the firm.

Before closing the round, Narrativa successfully participated in two media startup accelerator programs: Next Media Accelerator in Hamburg and Flat6Labs in Abu Dhabi.

“Our investment in Narrativa is in line with our vision to champion the creative community and foster the production of content,” says Maryam Al Mheiri, CEO of the Media Zone Authority, Abu Dhabi and twofour54.

Various studies have shown that the new generation of consumers is ready to take on AI.

According to the Dynamic Digital Consumer survey by Accenture released this year, consumers are hungry for AI-enabled services.

It even went as far as saying that AI is “taking a central role in consumers’ lives.”

The report revealed a third of those surveyed were interested in using a voice-enabled digital assistant in smartphones.

Of the respondents, 52% interacted through AI-powered live chats or mobile apps on a monthly basis, and 62% are comfortable with an AI application responding to their query, the report found.

Narrativa focuses on natural language generation, enabling it to produce content that any person can understand.

With this prospect in mind, will we see AI replacing journalists, authors or other content creators, anytime soon?

“At least at this point, I cannot see machines being able to write as well as humans. In the future I see AI assisting journalists, writers, and other content creators, not taking over their jobs.”

Last year, scientists at SONY released the first song ever written by AI. It’s not the greatest thing you may have heard, but hey, the way pop music is going these days, perhaps AI is the way forward after all.

SOURCE: Inc. Arabia - Meet One Of The First AI Startups To Get Funded In The UAE