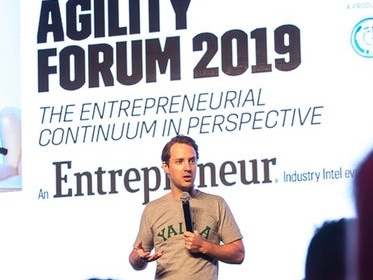 The Middle Eastern region is yet to get over the massive $3.1 billion deal between Uber and Careem, the biggest ever tech deal the region has ever seen. The representatives of 250 startups were more than eager to listen from the man himself. And he started with: “The fact is, we didn't start Careem with the purpose of making money, we did it to do something purposeful.”

“In our industry, when it comes to transportation, we don't have a very well-developed public transport infrastructure in the region,” he continued. “Google Maps didn't have great coverage in the region when we started. Financial inclusion is not fantastic. 90% of women in Pakistan don't have a bank account. So, for an entrepreneur, this is an opportunity. And it's extra awesome, because if you are on this path of a purpose, doing your purpose in the region allows you to help the region. There is so much here to doand you can really make a big business out of it.”

“In the next 10 years, as more industries move online, there's going to be a half-a trillion dollar annual revenue opportunity in the region,” he noted. Olsson thinks that the startup founders are more than capable of taking on the world by competing on a global scale. “There is absolutely no reason why the region cannot do as amazing, fantastic things, as we can do in Silicon Valley,” he told the forum’s audience. “We can build unicorns from the region. We might call them uni-camels, but we can make them happen. When I look at what our teams are doing, for example, our data and AI team -how they're using machine learning and artificial intelligence to solve some really, really challenging problems- we are on par with the best leading-edge technology and talent, comparable to anywhere else in the world.”

He also talked about the early days of his company, when things were hard. “When we started, people were like, 'Are you completely insane?'”

The company initially started the operations in the first day of Ramadan 2012 and they had to wait six weeks to win their first ride through the website. “On the backend, we got an email, and that email was sent to a phone, and the phone had a very loud ring signal, so that we would wake up when that booking came in the middle of the night,” Olsson added.

“We had a list of 20 captains that we had met outside Dubai Airport going up and down the taxi line and we started calling them. 'Khurshid bhai [brother] are you free?' No. 'Hafiz bhai are you free?' No. 'Mahmoud are you free?' Yes! 'Ok we have a booking in two hours.'” The booking came from Jumeirah Village Triangle, a place not so familiar to drivers at that time. “Also known as the Bermuda Triangle - you go in, and you never come out,” Olsson joked. No technology was available back then, and the driver had to be guided over the phone.

Careem never had to look back since then. “Today, we're doing like a million rides a day,” Olsson said. “If you're motivated by a purpose, then that's the only thing that matters. Entrepreneurship [is] the path to doing something meaningful with your life, [and] the region is the most exciting place to do it in.”