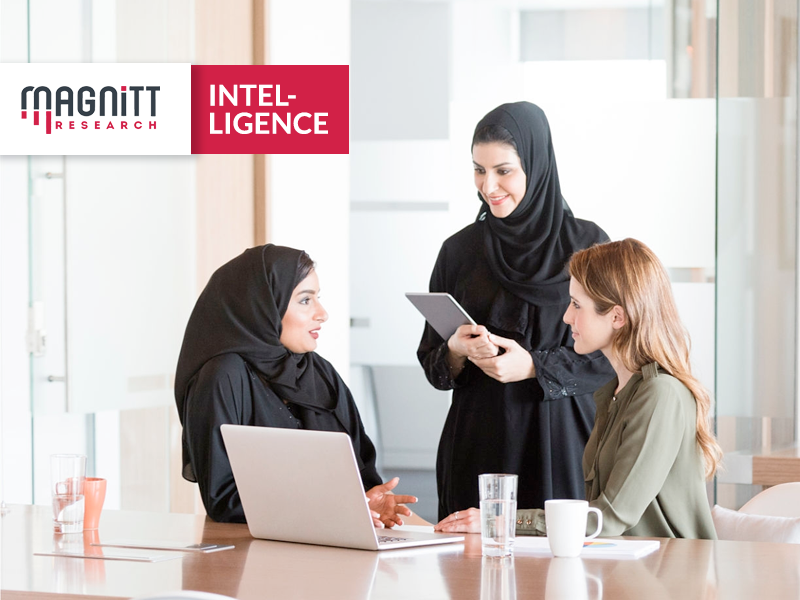 MAGNiTT Intelligence: The funding share of female founders is nearly 2 times higher in MENA than the United States – 5.1% in 2019

Another year, another International Women’s Day. Regardless of industry, March 8th shines a spotlight on female participation (or lack thereof) in the economy – and tech entrepreneurship is no different.

This week, we’re diving into a thorny topic in the entrepreneurship community: female founders of tech startups in MENA. A couple of things are especially interesting to look at here: the number of investment deals, the amount of funding raised, and the industries where we see more (and less) female founders, as well as the ‘other side of the table’ – the investors. With a database that now covers more than 4,000 founders who have received funding in MENA, MAGNiTT’s data tells a compelling story.

Back in 2017, MAGNiTT released its Founders Report, highlighting the female (co-)founders of the top 100 funded startups in the MENA region. The report highlighted that 12% of the founders of the top 100 funded startups were female, which was slightly lower than the average in both the United States and Europe. Over the years, there have been increasing efforts from both private and public entities to increase female participation within the sector, with initiatives across the region.

A lot has happened since 2017, however, with more female entrepreneurs starting their businesses in the region. Many of them have only set up their business within the last few years, and the vast majority of funding raised is still at the earlier stages (Seed & Series A), and sets up the necessary pipeline for later-stage investments.

According to TechCrunch, startups with only female founders accounted for 2.8% of total funding in the United States in 2019, whereas they accounted for 2.2% of number of deals.

Comparing this to the MENA region, however, we see a remarkable difference. According to MAGNiTT data, 5.1% ($36M) of total funding went to startups with only female founders in 2019, which is close to double the figure in the United States. Beyond that, startups with only female founders accounted for 4.5% of all deals in 2019, more than twice the percentage in the United States.

This paints a different picture than many would have thought. In terms of number of deals and amount of funding raised, women are gaining market share and the MENA region outperforms the United States for female founders’ share of investment -- but that does not mean there isn’t much more work to be done. It is important to highlight the undeniable progress that has been made, but to recognize the areas where female entrepreneurs are still under-respresented.

While countries such as Jordan, Bahrain, and Palestine see that 30%+ of all their funded startups have at least one female founder, countries like Egypt and Saudi Arabia are around the 15% mark (with markedly different population sizes, of course). In terms of the industry distribution in MENA, we are seeing significantly fewer women raising capital in the fast-growing industries of Transport, FinTech, and IT solutions (<5%).

Both in MENA and globally, there are a multitude of reasons for these discrepancies in the amount of funding raised, and perhaps key among those is an absence of women on the ‘other side of the table’ as investors.

In the MENA region, at least, and particularly in the UAE, this is improving incrementally. Within the still nascent MENA ecosystem, we are increasingly seeing women landing key roles within venture capital firms or angel groups, as well as becoming founding partners of these entities. Examples include WAIN, Global Ventures, Mindshift Capital, VentureSouq, and Village Capital, among others. With this, alongside government support through a variety of different programs, the visibility of success stories and lighthouse entrepreneurs, more women raising capital at the earlier stages, female entrepreneurship continues to gain traction within the region.

Are you interested in learning more about the UAE's funding and exit trends? Access our State of the UAE: Funding & Exit Evolution in 2019 report HERE

MAGNiTT Intelligence: The funding share of female founders is nearly 2 times higher in MENA than the United States – 5.1% in 2019