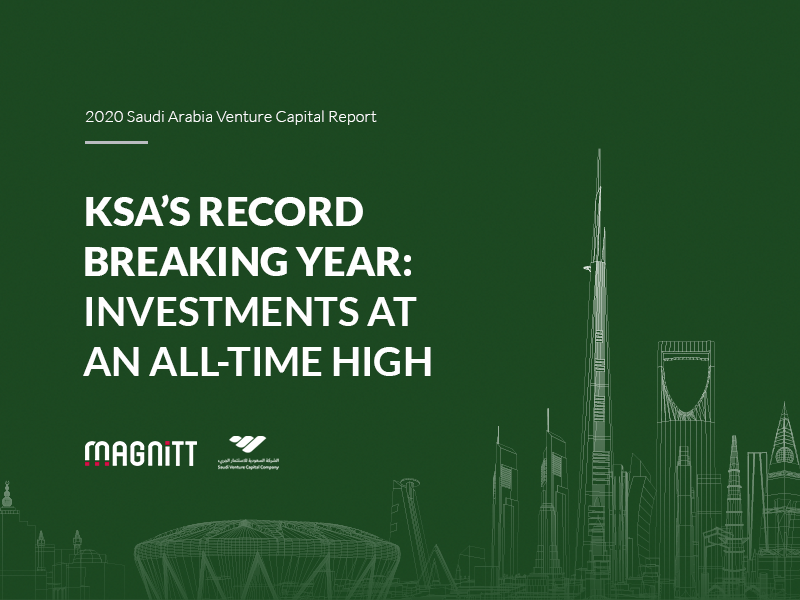 2020 was a record-breaking year for KSA’s startup ecosystem: VC investments at an all-time high, according to MAGNiTT

Against the backdrop of COVID-19, 2020 was a record year for Saudi startups for a number of key indicators, including number of deals, amount of venture capital ($) invested, and the total number of VC funds and angel investor groups investing in KSA-based startups.

“All of these record-highs point towards a thriving and maturing ecosystem in Saudi Arabia,” explains Philip Bahoshy, MAGNiTT’s CEO. “2020 was a roller-coaster year, and COVID-19 rapidly accelerated the adoption of technology and highlighted the importance of tech startups in emerging venture markets. In KSA, we’re seeing founders, investors, governments, and enablers working together to solve the pain-points of the ‘new normal, and these numbers are evidence of that.”

In a sign of continued growth for Saudi Arabia, 2020 saw a record-high of $152M invested in KSA-based startups, a +55% increase year-over-year (YoY):

● This amount of capital was also deployed across a record-high number of deals in 2020 (88 transactions), with the total number of transactions up by +35% YoY, reversing the general trend across MENA, where deals were down;

●  In the context of MENA, Saudi Arabia maintained its ranking of 3rd place for both number of deals and capital invested in the region, but the country’s startup deal-flow growth-rate was the largest across MENA, significantly narrowing the gap between KSA and Egypt;

●  Diving deeper, we see that 2020 saw multiple large break-out deals in KSA, with the increase in the total funding amount partially attributable to KSA’s top-5 deals by funding amount. These five deals accounted for 56% of all capital invested in KSA-based startups in 2020.

“Saudi Arabia is witnessing an increase in the quality and quantity in the deal flow of startups,” says Dr. Nabeel Koshak, CEO of SVC. “More venture capital funds, and angel investor groups are arising. We are thrilled by the distinguished entrepreneurs that are creating fast-growth and scalable startups. Despite the slowdown of COVID-19, Saudi Arabia saw a record increase in VC funding in 2020, compared to 2019. As part of Vision 2030, many new initiatives have been launched in recent years to spur VC investments and startup growth. Saudi Arabia has always been an attractive market for local and regional entrepreneurs due to its large market size.”

The impact of COVID-19

The ‘COVID-effect’ was felt throughout the ecosystem - but the effects were staggered towards later in the year as it takes, on average, 9-12 months for MENA-based startups to fundraise. Consistent with other emerging venture markets, KSA also saw an influx of capital towards industries that saw a surge in demand during the pandemic:

● Industries that saw increased demand as a result of the pandemic, like E-Commerce & FinTech, retained top spots by the number of deals, with the two sectors together representing 30% of all deals in 2020.

● E-Commerce investments accounted for 45% of all venture funding in KSA. Consistent with other evolving ecosystems with large populations, Transport climbed +13 spots in the rankings to 2nd for capital allocation.

MAGNiTT predicts that, in 2021, the KSA startup ecosystem will overtake Egypt and rank in 2nd place for capital invested.

The data underpinning the report is sourced from the MAGNiTT platform. You can find a full list of all startups, investors, funding rounds, and exits included in this report on MAGNiTT.

This report is free to download in English and Arabic.

Discover over 1,100 Saudi Arabia-based startups and 250 investors/enablers on the MAGNiTT platform!

2020 was a record-breaking year for KSA’s startup ecosystem: VC investments at an all-time high, according to MAGNiTT