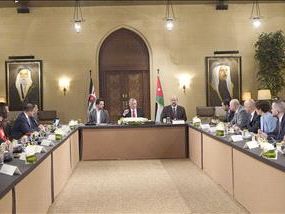 His Majesty King Abdullah on Monday called for providing all forms of support for entrepreneurship in Jordan and removing obstacles through short- and long-term solutions.

His Majesty expressed pride in the achievements of the young entrepreneurs, commending the efforts of supporting institutions.

Also at the meeting, attended by Prime Minister Omar Razzaz, His Majesty affirmed the importance of public-private partnerships in reviewing and updating policies and implementing plans to support entrepreneurship.

For his part, Prime Minister Razzaz highlighted the government’s efforts to support start-ups by developing legislation and an ecosystem that nurtures innovation.

The King was briefed by the attendees on plans to develop entrepreneurship in Jordan and the key challenges facing this sector.