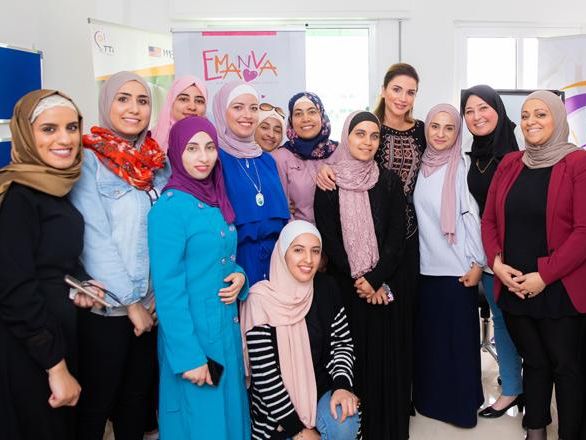 Jordanian women entrepreneurs empowered! Her Majesty Queen Rania visits Karak and expresses her confidence in the capabilities and achievements of young women, encouraging institutions to support the youth across Jordan

By: The Jordan Times

SOURCE: Jordan Times - Jordanian women entrepreneurs empowered! Her Majesty Queen Rania visits Karak and expresses her confidence in the capabilities and achievements of young women, encouraging institutions to support the youth across Jordan

Her Majesty Queen Rania on Wednesday paid a visit to Karak, where she met with a number of woman entrepreneurs and business owners from the southern governorate.

Joined by TTI CEO, Belal Raslan, and Vice President, Neda’ Kharoub, Her Majesty met with the incubator’s female startup owners, who shared their opinions on the state of entrepreneurship in their areas. She also heard from 03-Incubator Project Coordinator, Rafah Tarawneh, who explained how the incubator fosters the development of the women’s businesses, according to a statement sent by Her Majesty’s office.

The Queen expressed her confidence in the capabilities and achievements of the young women, adding that incubators and other similar institutions play a key role in the empowerment of youth across Jordan, the statement said.

Launched in 2010, TTI aims to promote entrepreneurship and innovation among Jordanian youth. Working with the public and private sectors to foster partnerships in the entrepreneurship ecosystem, TTI has reached more than 6,000 beneficiaries to date in Karak, Irbid, and Amman through workshops, entrepreneurship training camps, mentoring, and networking services.

Her Majesty emphasized the importance of such projects in enriching Jordan’s tourism sector, explaining that tourists seek out cultural experiences that inspire them to prolong their visits to tourism destinations, according to the statement.

Karaki Jameed House’s founders, Amani and Ayat Bashabsheh, briefed Her Majesty on the history of their project as well as their future plans to grow their business. The Queen also joined a number of women beneficiaries, who walked her through the process of cooking Jordan’s national dish, mansaf.