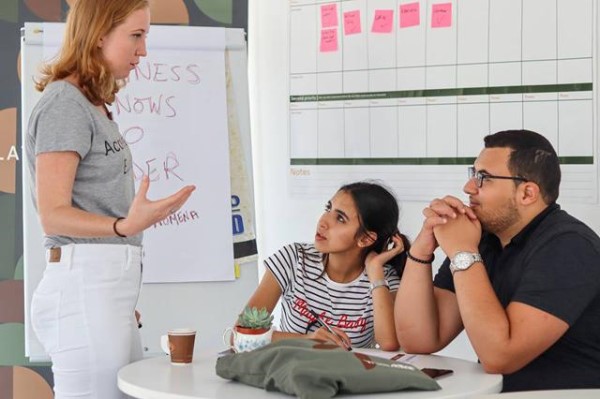 (MENAFN - Jordan Times) AMMAN — As a 2017 research showed that all-women entrepreneurial teams have only captured 2 per cent of investment by venture capitalists last year, a regional network is supporting Arab female entrepreneurs to accelerate their tech startups across the Middle East and North Africa (MENA).

Founded in 2014 to encouraging gender diversity and inclusion in the regional entrepreneurship ecosystem, Womena has built an award-winning Angel Investment group which already facilitated over 3 million AED ($817,000) in funding into 10 companies.

Romouz Sadeq, a young Jordanian entrepreneur, is one of these female leaders who benefitted from Womena's womentum accelerator over the past four months.

On Thursday, she presented her innovative beauty delivery startup Mrayti to the regional ecosystem, as part of womena's inaugural Demo Day, which honoured seven other women entrepreneurs from Saudi Arabia, the UAE, Egypt, Tunisia and Morocco.

"I've been fortunate enough to be part of this programme among brilliant startups from all over the Arab world. I really feel privileged to have gone through this programme, which enabled me to become a better CEO,' Sadeq told The Jordan Times after the event.

She acknowledged her initial skepticism "with so many failed accelerator programmes that left us with empty promises and unfulfilled potential". "It was hard to imagine that an accelerator programme in its first rotation would deliver such value and be so well-planned,' she commented.

Mrayti, which was founded in 2017, delivers trusted, convenient and affordable beauty services by connecting independent stylists with customers looking for on-demand services,' according to Sadeq, who said that her innovative startup has helped support over 20 women across Jordan, 'who could not adapt to the rigid concept of a 9 to 5 job'.

"We are proud to showcase our first cohort of startups, who have made leaps and bounds since the start of the programme," said Elissa Freiha, founder of womena, adding 'we've seen these companies and their founders grow exponentially. They've taken risks, they've pivoted, they've signed on their first clients — the progress has been stupendous and is a sign that this type of programme is much needed."